"The army knows it": in Mexico, the demonstrators demand justice for the "43" of Ayotzinapa

New clashes erupted at the end of the procession in the center of the capital despite the call for a peaceful march made by President Andres Manuel Lopez Obrador, who had declared a day of mourning on Monday. 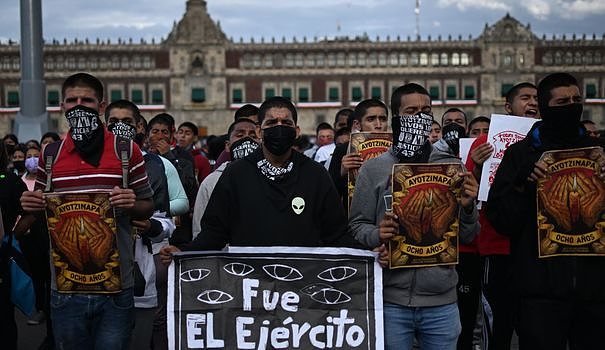 New clashes erupted at the end of the procession in the center of the capital despite the call for a peaceful march made by President Andres Manuel Lopez Obrador, who had declared a day of mourning on Monday.

Families of the '43' marched under a banner displaying the words 'the army knows', a month and a half after an official report implicated the armed forces for the first time in eight years.

"We demand that we investigate the military, that we punish them, that we don't just investigate organized crime," said the mother of one of the youngsters, Blanca Nava.

The students disappeared on the night of September 26 to 27, 2014 in Iguala, in the state of Guerrero (south), where they had gone to "requisition" buses in order to demonstrate in Mexico City.

According to the first official investigation carried out under former President Enrique Pena Nieto (2012-2018), the 43 young people were arrested by local police in collusion with the Guerreros Unidos gang.

They were later shot and burned in a landfill for reasons that remain unclear. Only the remains of three of them could be identified.

The report of the "Ayotzinapa Truth Commission" concluded in August that the Mexican military also had a share of responsibility in this crime.

President Andres Manuel Lopez Obrador congratulated himself on Monday for having broken "the pact of silence and impunity".

Ex-Attorney General Jesus Murillo Karam was arrested after the report was published. He will be tried by a criminal court for "enforced disappearances, torture and obstruction of justice".

"This is a significant step forward," said family lawyer Vidulfo Rosales, who however denounces setbacks in the investigation, such as the cancellation of 20 arrest warrants for those responsible for the Ayotzinapa tragedy.

A Mexican court had issued 83 arrest warrants in late August in the case of the 43 missing.

Mexico has asked Israel for the extradition of Tomas Zeron, ex-head of the Criminal Investigation Agency under former President Enrique Peña Nieto (2012-2018). He is accused of manipulating evidence.

Mexico has more than 100,000 missing people, "a human tragedy", denounced in May the Office of the United Nations High Commissioner for Human Rights.

The count of the missing began in 1964, when the Mexican regime waged a "dirty war" against groups of political opponents.

Enforced disappearances increased from the 2000s in a context of violence linked to drug trafficking.