California, as well as parts of Nevada and Arizona, are facing scorching temperatures, flirting with 45°C in some places, due to a heat dome over the area. 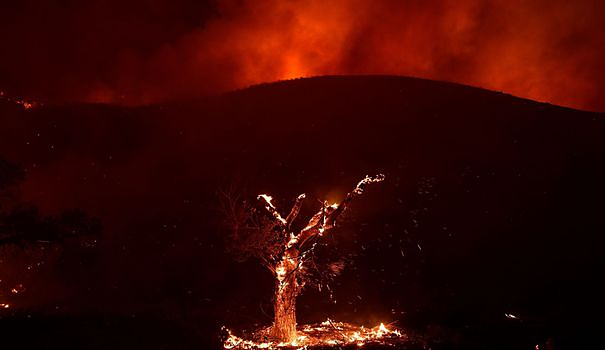 California, as well as parts of Nevada and Arizona, are facing scorching temperatures, flirting with 45°C in some places, due to a heat dome over the area. Mercury is yet to reach such extremes on Wednesday and Thursday, according to the National Weather Service.

In this stifling atmosphere, several large fires are ravaging the region and two of them have already proved fatal.

In northern California, the "Mill Fire" killed two people, destroyed more than a hundred buildings, and devastated more than 1,600 hectares in Siskiyou County.

The "Fairview Fire", southeast of Los Angeles, continues to grow and remains out of control, according to firefighters, after killing two people. Since Monday, the flames have ravaged more than 2,000 hectares.

The mercury should drop from Friday thanks to the arrival of a cold air front from Canada, according to meteorologists. But this phenomenon brings with it the risk of violent winds capable of multiplying the flames in the West of the United States.

“This cold air front will also generate gusty winds” over the American West, explained the National Weather Service in a press release. "Coupled with relatively low humidity, this is likely to fuel the risk of new fire starts and existing fires at risk of spreading out of control."

In Montana, gusts could reach 95 km / h, according to the Storm Prediction Center.

In California, more than 10,000 residents were ordered to evacuate their homes to protect themselves from the "Fairview Fire", but many ignored the alert according to the Riverside County police, who sent their officers door-to-door -door to try to convince the recalcitrant.

"People should take it more seriously, given the speed of spread, and that's why we are extending the evacuation zone so much, because with the changes in the wind, the weather is unpredictable, and the fire is progressing. quickly," a spokeswoman for the local sheriff, Brandi Swan, told the Los Angeles Times.

Struck for more than 20 years by drought, the American West is particularly vulnerable to fires, which have intensified in recent years.

The sequence of these extreme episodes is also becoming more common according to climatologists, and the weekend could provide a new example.

In the Southwest of the United States, forecasts promise torrential rains just after the fall of the mercury on Friday. A hurricane is looming off Mexico that could bring up to 6 inches of precipitation to parts of Arizona and California.

"This amount of rain is likely to cause flash flooding here and there, especially in areas already destroyed by fire," the National Weather Service warned.

Meanwhile, the heat wave continues to put pressure on the power grid in California, due to record air conditioning demand.

The grid regulator, California ISO, narrowly avoided resorting to voluntary power cuts on Tuesday. It has issued several alerts in recent days asking households to limit their consumption from 4:00 p.m. to 9:00 p.m.

Californians are therefore asked to avoid recharging their electric vehicles during this time slot, not to set the air conditioning below 25.5°C and to refrain from using their main energy-consuming equipment.

In the middle of the day, all the solar panels generally provide one third of the electricity in California. But when the sun goes down, the supply of photovoltaic energy is abruptly interrupted, leaving the other sources of electricity to take over - which is a problem in the early evening, when the heat of the day is not still falling, pushing demand via air conditioning.