"Thank you, beautiful queen": in Buckingham and Windsor, a grieving nation meditates

"Thank you, fair queen," reads one of the messages posted outside Buckingham in the heart of London. 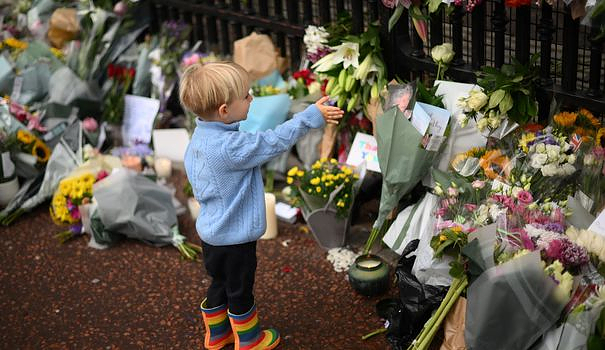 "Thank you, fair queen," reads one of the messages posted outside Buckingham in the heart of London. "You have served your country to the end," greets a second. "You were a light that guided us through the darkest times, the bedrock of our nation, of our strength. Rest in peace," added another.

Soldiers in red coats, faces of marble under their famous tall fur hats stand guard behind the gates of Buckingham, the official residence for the Queen during her 70-year reign.

Natalie Vehring, a 46-year-old violinist who has performed at concerts attended by the Queen, came with her husband and two sons in school uniform. She video calls her mother in Australia.

She "remembers the death of King" George VI in 1952, adds Ms. Vehring, who grew up in Australia. "The monarchy was an important part of our childhood, we sang the national anthem every day at school".

"It's amazing to see that she was still working on the eve of her death," she adds.

“She was our monarch all my life and led the country by example,” she recalled, tears streaming down her cheeks. "Charles has such a great example to follow. I think he will do everything possible to continue his parents' legacy."

Laura Beirne, textile designer, takes a picture of herself in front of the palace. "I came to pay my respects to the queen, as a feminist, she was a leader", explains the young woman of 30 years.

About King Charles III, she wants to believe that he will have "a sense of humor".

"I find it very positive that he defends the environment, it's important for my generation," she adds. And as a royalist, she believes that "it's beautiful to see everyone together".

Hundreds of people, often in tears, also rushed to Windsor Castle, on the outskirts of the capital, which had become the main place of residence of the queen since confinement.

Marina Flynn, 79, whose husband worked with the Queen's husband, Prince Philip, is dressed in black.

Queen Elizabeth II "was wonderful": I met her two or three times with the Duke of Edinburgh (Prince Philip's title, editor's note) and they were really nice. I am upset".

Anthony Evans, 37, took the day off to come, accompanied by his four-year-old son.

“Are you saying goodbye to the queen?” he asks the toddler, who waves his hand from his stroller. "I wanted to bring her because it's a historic moment. I'm not very monarchist but she was our queen and a fantastic queen".

He expresses doubts about the ability of the new King Charles III to rise to the task, like many around him in Windsor. "But I guess it's still hard for me to imagine life without the Queen."