Thailand: The grief of the family of Stamp, three years old and killed in the attack on a nursery

The red plastic truck has remained in its place, near the bedroom wall with other toys, but the unmade bed, strewn with blankets, testifies to the tragedy that has just upset the life of this house in Na Klang (north ). 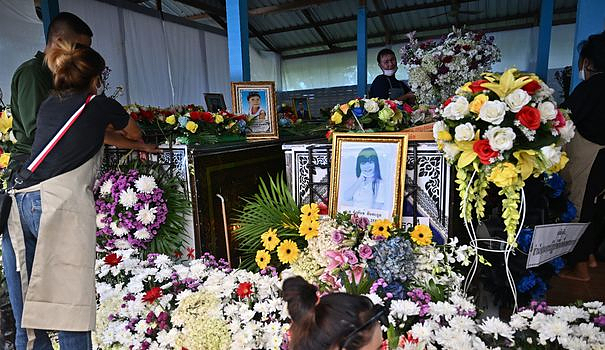 The red plastic truck has remained in its place, near the bedroom wall with other toys, but the unmade bed, strewn with blankets, testifies to the tragedy that has just upset the life of this house in Na Klang (north ).

This hitherto uneventful rural district watched helplessly as one of the kingdom's worst massacres: 36 dead, including 24 children. Symbol of strong emotion, King Maha Vajiralongkorn went there on Friday evening.

The assailant, a former policeman, killed himself after a murderous journey of about three hours, which began around noon in a nursery, where Nannaphat Songserm, nicknamed Stamp, was playing with other young children.

"I keep telling myself that I shouldn't have let him go that day, but there's nothing I could have done," sighs his grandmother, Banyen Srichanil, 57 years old, who took care of him when his parents were working.

The cheerful and talkative boy, inherited his nickname from his mother's passion for the promotional stamps distributed in 7-Eleven stores across the country, which she collects.

"He could play all day," says his father Sathhaphorn Songserm, 31, his voice cracking with torment, explaining that the son who already looked like him could play with anyone and "anything".

"I did everything in life for one reason: him," says Sujittra Pornnikom, his 29-year-old mother, who cherishes the moment she saw his face for the first time after giving birth: "I was very happy."

She, like her husband, saw their love only on their days off. The couple work in a factory in Chonburi province, near Bangkok, an eight-hour drive from their home.

The last time they saw each other they went to the beach. "He really liked it," she recalls.

“He would then call me all the time and ask me to take him back to the beach,” she continues.

Prime Minister Prayut Chan-O-Cha on Friday distributed giant cardboard compensation checks for the families of the victims, from various government agencies, up to 200,000 baht (about 5,400 euros).

"It's not worth what we lost", assures the one who thinks that "the system was not strong enough to stop the shooter".

As the funeral of the victims began on Saturday for three days of Buddhist rituals, Stamp's family dreads November - they don't know what to do to celebrate what should have been the boy's fourth birthday.

Stamp had asked his father for some Thai-style grilled pork to share with his friends and family. "I can't believe that was the last time I spoke to her," he said, shaking.

"I couldn't grant his wish."