Overshadowed by deep political tensions, US President Joe Biden traveled to the southern border of the US in the state of Texas for the first time since he took office. 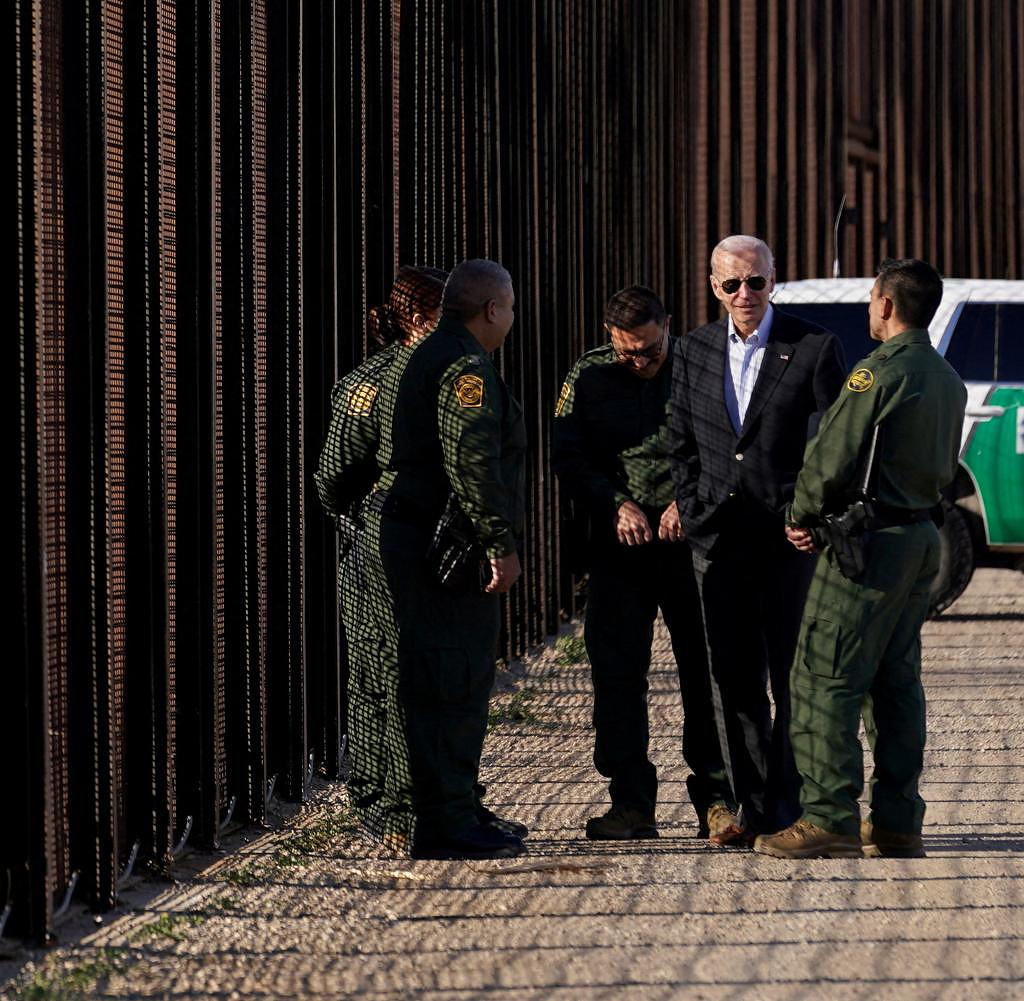 Overshadowed by deep political tensions, US President Joe Biden traveled to the southern border of the US in the state of Texas for the first time since he took office. During his visit of several hours on Sunday in the city of El Paso, Biden met border officials and walked along the border wall with Mexico. The Democrat was previously greeted coolly by Texas Gov. Greg Abbott at the border city's airport.

The Republican handed Biden a letter in which he made serious allegations against the government. The visit comes two years too late, Biden's "failure" is responsible for the "chaos" at the border. El Paso had recently developed into a focus of migration to the USA - the situation had deteriorated dramatically in December.

Abbott made the letter he had given Biden public immediately afterwards. "Their open-border policies have emboldened the cartels that grow rich from trafficking in deadly fentanyl and even humans," it said. The US experienced “the worst illegal immigration” in the country's history. The Texans would pay a particularly high price for this. In El Paso, the migrant camps were specially cleared for Biden's visit, Abbott said.

The Republican demanded that the construction of the border wall in Texas must be resumed immediately. As one of his first acts in office, Biden shut down the heartfelt concern of his Republican predecessor Donald Trump. Strictly speaking, the wall with its high, metal pillars is more of a fence than a wall.

Biden has repeatedly been sharply attacked by Republicans because of the situation on the border. Republican governors of various states in the southern United States - including Abbott - had repeatedly sent coaches full of migrants to democratically governed states such as New York or the capital Washington last year to put pressure on Biden. The White House then compared the governors to smugglers.

Biden now visited a crossing at the US-Mexico border in El Paso. He also had border officials show him how to search these vehicles. He got an idea of ​​a facility where aid organizations take care of arriving migrants. According to the accompanying press, the employees there made it clear that they needed more financial support. Accordingly, Biden did not meet migrants during his trip to exchange ideas with them.

With the high number of migrants, both the local authorities and the local aid organizations are overwhelmed. In El Paso there is not enough housing for the people. At the US-Mexico border, the US Border Protection Agency registered more than two million attempts by people to enter the US between October 2021 and October 2022. According to the statistics, the number of migrants who do not come from Mexico, Guatemala, Honduras and El Salvador is growing. More and more people are coming from Cuba, Colombia, Nicaragua and Venezuela.

Thousands of migrants are currently waiting at the US border, hoping for an opportunity to enter the country. The US Supreme Court recently ruled that the controversial Title 42 directive should remain in effect for the time being. The regulation stipulates that most undocumented migrants are immediately turned away at the border without even being able to apply for asylum. This should initially contain the spread of the corona pandemic. In the meantime, however, politicians and authorities in the USA fear above all a sharp increase in migration if the directive is canceled.

In view of the dramatic situation and the ongoing criticism, Biden had recently started a new attempt to curb illegal immigration to the USA and announced new regulations. Under certain conditions, up to 30,000 migrants per month from Venezuela, Nicaragua, Cuba and Haiti can enter the United States legally. In return, 30,000 illegal immigrants are to be deported from these countries to Mexico every month.

Biden continued to travel to Mexico on Sunday. He plans to meet Mexican President Andrés Manuel López Obrador and Canadian Prime Minister Justin Trudeau on Tuesday for the annual North America Summit. A bilateral meeting between Biden and López Obrador is already planned for this Monday, and another talk between Trudeau and López Obrador on Wednesday.

According to the Mexican government, the summit will focus on safety, environment, health, diversity and competitiveness. However, the most important issue is likely to be migration. The Mexican President supported the new US initiative. It gives migrants the chance to legally enter the United States and thus prevents the often dangerous journey through Mexico and illegal border crossings. Migrants in Mexico are repeatedly victims of criminal organizations who kidnap, rob or rape them.

Mexico wants to submit a proposal for an "alliance for the prosperity of the peoples of America" ​​at the summit, as Foreign Minister Marcelo Ebrard announced. The aim is to fight poverty in the region and distribute wealth more fairly. It should primarily be about combating the causes of migration. The US government presented a similar program at the America Summit last year with the “American Partnership for Economic Prosperity”. Supply chains are to be strengthened, investments simplified and jobs created in the field of renewable energies.

‹ ›
Keywords:
BidenJoe BidenTexasApple PodcastTexttospeechPolitikNewsteamKubaUSAVereinigte StaatenMexikoRepublikanerJoseph R.VenezuelaEl PasoNicaraguaGreg Abbott
Your comment has been forwarded to the administrator for approval.×
Warning! Will constitute a criminal offense, illegal, threatening, offensive, insulting and swearing, derogatory, defamatory, vulgar, pornographic, indecent, personality rights, damaging or similar nature in the nature of all kinds of financial content, legal, criminal and administrative responsibility for the content of the sender member / members are belong.
Related News