"Terrorism is not me", defends one of the accused at the trial of the Nice attack

Invited to speak for the first time on the facts, the seven defendants present all wanted to stand out from the murderous attack on Mohamed Lahouaiej-Bouhlel who, driving a ram truck, had killed 86 people and more. 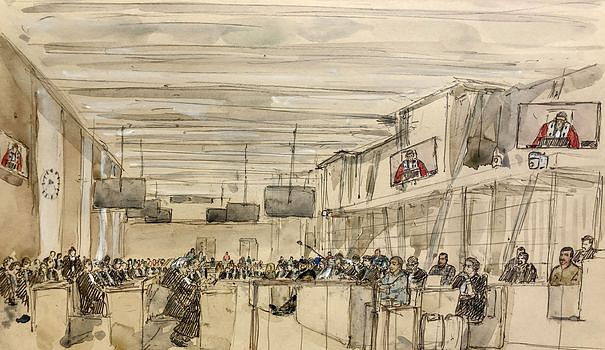 Invited to speak for the first time on the facts, the seven defendants present all wanted to stand out from the murderous attack on Mohamed Lahouaiej-Bouhlel who, driving a ram truck, had killed 86 people and more. of 450 injured on the Promenade des Anglais on July 14, 2016.

"I have nothing to do with what happened," said Mohamed Ghraieb, who appears free under judicial supervision. He is one of the three defendants tried for association of terrorist criminals (AMT) and incurs 20 years of criminal imprisonment.

The prosecution accuses him in particular of a "great proximity" with Mohamed Lahouaiej-Bouhlel and the fact of having traveled with him on July 11 in the truck which was going to be used for the attack.

"It's not a man who did that, he's garbage", gets carried away this 46-year-old Franco-Tunisian, saying he is convinced that the author of the attack, who had several grievances against him, l “trapped” out of jealousy, in particular by sending him compromising messages.

"For me, as a Niçois, it's really not easy that people can think that I am involved in such serious facts", argues for his part Ramzi Arefa, 27, short beard and black jacket.

In pre-trial detention since 2016, he is the only defendant who faces life imprisonment, being in a situation of legal recidivism.

Also prosecuted for terrorist criminal association, he admits having "been the intermediary for the sale of a pistol". But "I never wanted to partner with him on any project," he protests.

"I did not help him, not at all", also affirms - via an interpreter - Chokri Chafroud, 43-year-old Tunisian, next to Ramzi Arefa in the box.

If he admits to having been close to Mohamed Lahouaiej-Bouhlel, he claims not to have known "what he had in his head".

One of the four defendants dismissed for arms trafficking, Endri Elezi, a 30-year-old Albanian, bursts into tears on the stand, discussing his situation in a confused way. "I didn't know anyone (in France) apart from my cousin. I carried something that I shouldn't have".

His cousin Adriatik Elezi, also implicated in this case, committed suicide in prison in 2018.

An eighth defendant, Brahim Tritrou, detained in Tunisia, is "tried by default".

- No longer heard before November -

The accused will no longer be invited to speak until early November.

Aware that the first part of the trial "leaves them a little aside", the president of the special assize court Laurent Raviot assured that the court would take "the time necessary to examine their personality, the charges against them and their elements defence".

The assailant, Mohamed Lahouaiej-Bouhlel, a 31-year-old Tunisian killed by the police on the evening of the attack, is the main absentee from the trial.

This delivery driver - psychologically unstable and known for acts of violence, in particular against his wife - "was part of an ideological approach of jihadist inspiration several months before" the attack, according to the prosecution.

In the morning, the court had debated the advisability of projecting the CCTV images of the attack.

This viewing is "very important" for many victims, argued the majority of civil party lawyers, while those for the defense consider that it "is not necessary".

The president did not specify when he would make his decision but stressed at the end of the hearing that in any case the video could not be viewed on Friday as initially planned.

Five weeks will also be devoted to the testimony of the civil parties. 1,940 people had joined as civil parties on Tuesday in the middle of the afternoon (against 865 before the start of the trial), among whom around 300 wish to testify.

At the beginning of the afternoon, the president and one of the assessors read a summary of the facts and the investigation, an exercise which lasted three hours.

Mr. Raviot could not hide his emotion as he listed the names of the 86 victims. The youngest was two and a half years old and the oldest, 92 years old.