At 21, the Pole adds a third Grand Slam title to her collection, after her two coronations at Roland-Garros in 2020 and in June this year. 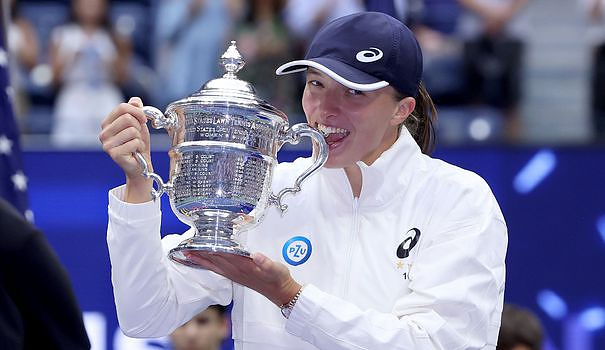 At 21, the Pole adds a third Grand Slam title to her collection, after her two coronations at Roland-Garros in 2020 and in June this year. She succeeds the New York winners of the Briton Emma Raducanu, who created the sensation in 2021, by winning after leaving the qualifications.

Faced with Jabeur, who was playing her second consecutive Major final after the one lost two months ago at Wimbledon, she held her rank as favorite.

Aggressive and sharp, Swiatek quickly chained the winning blows, overtaking her rival, who appeared borrowed from the heart of Arthur-Ashe where she entered much more tense than usual.

The Pole broke her from the start, then two more times in this one-way first set, at the end of which she passed 90% of the first ball and attacked the net with great success (eight points scored on 9 climbs ).

The Tunisian, who had managed to unbreak to respond to the loss of her first service game by dropping beautiful uncrossed forehands, could not confirm this burst on her following commitments, betrayed by a first ball, yet one of her points strong, broken down.

At the start of the second set, after drawing on her concentration in her chair, closing her eyes and breathing deeply, Swiatek resumed with effective placed attacks and broke away 3-0.

- Turning point of the ninth game -

Advantage that Jabeur immediately set about erasing, finally letting go of his shots. Debreak followed by another because the Pole again took her service behind, after exchanges showing that a completely different match was then being played.

The ninth game was a turning point, during which Jabeur cornered Swiatek, who owed his salvation only to the unforced errors of the Tunisian. The latter thus wasted three break points and blamed herself for it by shouting her frustration.

But, pushed by his box displaying "yalla habibi!" (come on honey!), she sighed in relief at 6-5 against her when her rival missed a match point.

A short reprieve since in the tie-break, Swiatek did not miss the opportunity to finish on his second decisive opportunity in 1h51.

In New York, the world No.1 demonstrated that she was not just a clay court player. Her victory on the cement of Flushing Meadows where she had, until this fourth participation, never passed the stage of the round of 16 demonstrates her dazzling progress, already glimpsed at the very beginning of the year at the Australian Open where she had reached the semi-finals.

A success which comes a little more to crown a formidable season, since between February 20 and June 22, she chained no less than 37 victories which offered her six titles in a row, in Doha, Indian Wells, Miami, Stuttgart, Rome then Roland-Garros.

An irresistible momentum finally stopped in the third round of Wimbledon by the French Alizé Cornet, which preceded a difficult start to the American summer, with early eliminations in Toronto then Cincinnati. But as the champion she has become, it didn't take her long to resume her royal path.