Ten tips for Vienna off the tourist track

A synonym for Vienna is often the first district, the historic heart, a concentrate of splendor and atmosphere: Hofburg, St. 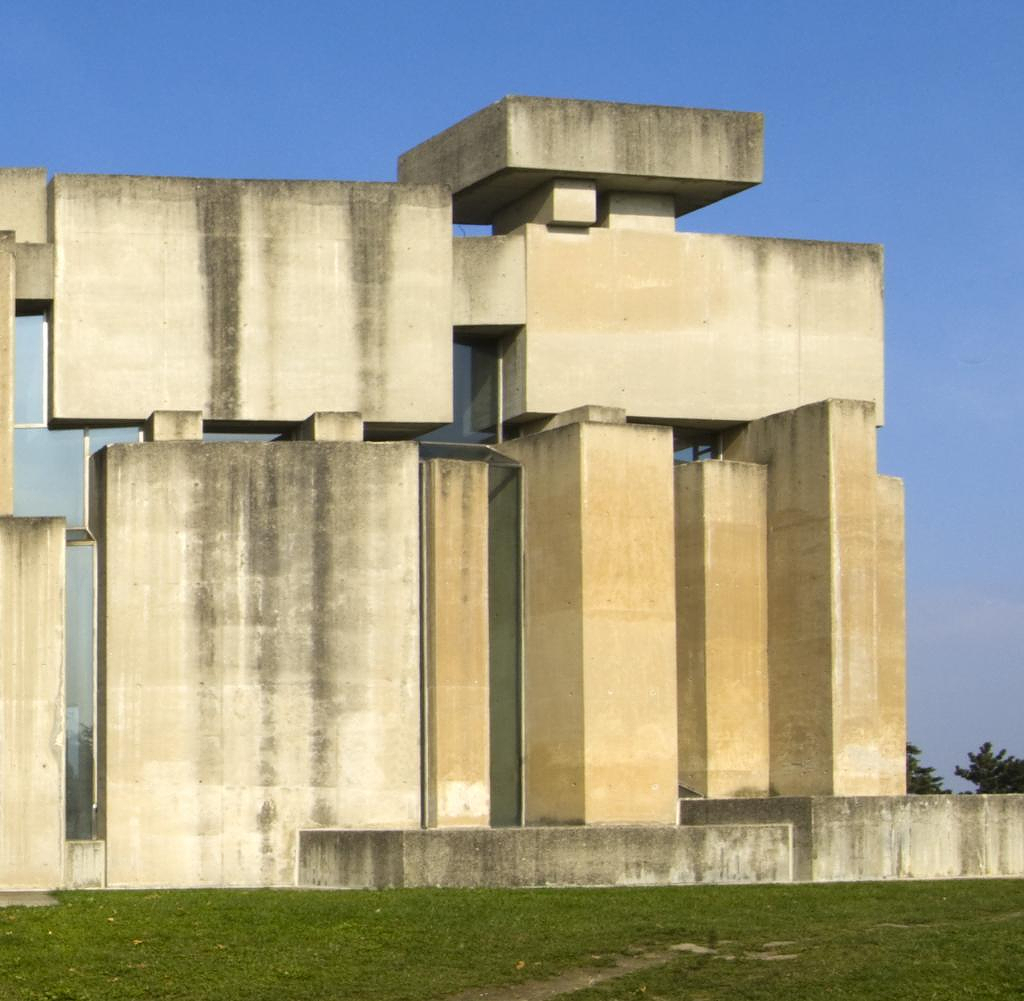 A synonym for Vienna is often the first district, the historic heart, a concentrate of splendor and atmosphere: Hofburg, St. Stephen's Cathedral, coffee houses, elegant boutiques, the traces of Mozart, the clatter of hooves of the Fiaker. Visitors to the metropolis on the Danube who dare to venture to the fringes, deviate from well-trodden paths and explore the unknown get different impressions – including culinary delights. Curious? Here are ten suggestions for the "other Vienna".

St. Stephen's Cathedral stands for the church gigantism of the Gothic, a chest drumming of the clergy that has become stone. On the other hand, the Wotrubakirche in the south-west of Vienna comes along in a way that conservative souls just don't imagine a Catholic church. 152 concrete blocks interlaced with glass, reduced to bare architecture.

Its official name is the Church of the Most Holy Trinity, but many only know it by the name of its creator, Fritz Wotruba (1907–1975). The artist placed the fascinating and provocative church in the green of the Georgenberg and proved that beauty can lie in rough simplicity. Whoever looks through the windows at the trees in which the wind is playing feels pure deep relaxation. Belief doesn't matter.

The Wotruba Church has limited opening hours, information at georgenberg.at

It's like running the gauntlet. "Would you like to taste something?" Or: "You have to have a snack at the Naschmarkt." "If you take a sample and don't buy anything, you can quickly get a rebuff," says city guide Ilse Heigerth, 50, who lives nearby but never shops at the Naschmarkt because of the high price level.

The Brunnenmarkt in the 16th district of Ottakring is completely different. More than 170 street stalls are reflections of the multicultural district, a piece of Viennese market exoticism with a down-to-earth feel. A mango a euro, also a kilo of tomatoes, four panties for five. View companions at the stand aisles are turkey necks, chicken feet, packets of dates, smoked pig ears. It smells of flowers, fish, curry, cheese, coffee - and not of hardened tourist trade.

Vienna without Empress Sisi (1837-1898) - that is unthinkable even for the stars of the second row. A showcase in the Hofmobiliendepot exhibits her gloves and stockings, and a small section is dedicated to her body and beauty cult. In this respect, "Möbelmuseum" as the middle name of the Imperial Furniture Collection is misleading.

Even more Sissy. Emperor Franz Joseph gave his wife, who loved to travel, the Hermesvilla as a refuge far away from obligations. Although she called the country house "Castle of Dreams" in a poem, Sisi did not feel comfortable here in the long run.

No wonder, given the gloomy staircase and her bedroom, which is downright overwhelming with wall and ceiling paintings. The state bed has a double-headed eagle and imperial crown, and the ghostly figure next to it could have sprung from an old Edgar Wallace film.

Vienna's central cemetery is in every travel guide, the celebrity graves there (Falco, Beethoven) are real places of pilgrimage. More original and not at all overcrowded is Vienna's Cemetery of the Nameless. It is embedded in a green hollow, surrounded by hedges, chestnut trees and the chapel.

“Even as a child, I helped my grandfather, who had the same name as me, with the care of the graves,” remembers Josef Fuchs, 61. Together with his wife Rositta, he takes care of the listed area on a voluntary basis. There are 102 graves, "the majority of suicides," says Fuchs, washed up by the nearby Danube. “Not to forget you”, that was already the concern of the grandfather.

The last burial took place in 1940. Not every grave is nameless - some identities could be clarified afterwards. The morbid cemetery flair with the cast-iron crosses pulls in strangely. The neighboring concrete plant doesn't bother us either.

The Cemetery of the Nameless is freely accessible at all times, friedhof-der-namenlosen.at

"Our reputation is greater than the house," says the small cabaret Niedermair. The entrance could hardly be more inconspicuous. Two billboards on the house wall flank the way to minimalist spheres.

The small hall holds a hundred visitors, the rows of seats are reasonably upholstered: clear the stage for word acrobats, thought jugglers. The cabaret stands for sophisticated cabaret entertainment and also gives young talents a chance. However, there is a break in July and August.

The ceilings look devastating: discolored yellow, due to tobacco consumption in the past. But that is exactly what makes the Jelinek coffee house, which opened in 1910 in the sixth district of Mariahilf, all the more authentic. Photo and autograph galleries of prominent visitors stretch across the walls, a dedication reads "Geile Waiter". The sections of plush sofas and chairs are divided by colour: green on the windows, red on the gallery, blue a little more separated.

Coffee house insiders know: Compared to well-known addresses in the center, the cups here are better filled and the prices are not excessive. Tourists, Corona or not, are hardly to be found. The special vocabulary of Viennese coffee house culture is the same, ranging from the “extended brown” (coffee diluted with hot water) to the “Einspänner” (mocha in a glass with a topping of whipped cream).

Created in the 1880s as an amusement park for laborers in the brick industry, most of whom came from Bohemia and Moravia, the Bohemian Prater is a mini version of the famous Prater. It can't keep up with rides for adrenaline kicks, but it offers nostalgia, the oldest wooden carousel in Europe and a view of St. Stephen's Cathedral from Vienna's geographically highest Ferris wheel.

The area merges seamlessly into the local recreation area Laaer Wald - with a distant view of the skyline of the Donau City district, the Kahler Berg and the Leopoldsberg.

Don't worry, even in the most recent times of crisis, no horse was portioned out for Fiaker goulash. After the Corona lockdown, the famous carriages roll through Vienna again. Fiakergulasch is only named after the Fiaker drivers, who are said to have a blessed appetite.

The beef goulash with sausages, fried eggs and sliced ​​gherkins is served in rustic taverns - an authentic and filling alternative to the long-running Wiener Schnitzel.

They are golden brown in colour, round as a ball and easy to bite into: the Viennese laundry girls, the sweet conclusion of our trip. Does the buxom shape build a bridge to the namesake? The profession of laundry maids once shaped the cityscape. They regularly picked up the dirty laundry from the rich households and brought it back clean. You could see them carrying baskets everywhere.

Pitted apricots, filled with marzipan, fried in batter and lard, sprinkled with powdered sugar, are in the culinary Wäschermädln, and are often served in vanilla sauce with slivers of almonds and sour cherries. Jürgen Gschwendtner, head chef at the “Meissl

Arrival: For example, by train in an environmentally friendly and relaxed way (bahn.de). Comfortable direct connections without changing night trains with sleeping cars are available from Hamburg, Berlin, Bonn or Cologne with the ÖBB Nightjet (nightjet.com).

Accommodation: The boutique hotel "Altstadt Vienna" maintains a charming retro style in an old patrician house, with a terrace in the countryside, double rooms with breakfast from 165 euros (altstadt.at).

In the "25hours Hotel" the colorfully designed interior revolves around the theme of the circus, with a roof bar; Double rooms from 106 euros (25hours-hotels.com).

Also recommended in the first district is the "Motel One Vienna State Opera", double rooms from 107 euros (motel-one.com).

On the go: The Vienna City Card offers free travel on public transport and various discounts on admission to restaurants or museums, for example, or a discount on city walks (viennacitycard.at). A practical companion on the smartphone is the Ivi app, the mobile city guide from Vienna Tourist Board, available free of charge from the Apple Store and Google Play.

Information: The official online travel guide for the City of Vienna, wien.info, is clearly laid out

Participation in the trip was supported by Vienna Tourism. You can find our standards of transparency and journalistic independence at axelspringer.de/independence.

If you want to enter Germany, you need a negative corona test. Excluded are vaccinated or recovered. But if you come from a virus variant area, vaccination is of no use. Nevertheless, a negative proof is required here.

This article was first published in August 2021.