Tall stories at the Festival's beginning ...'

The Storytelling Festival "In Ubeda it's told returns to Ubeda to visit different squares and patios in the World Heritage city. 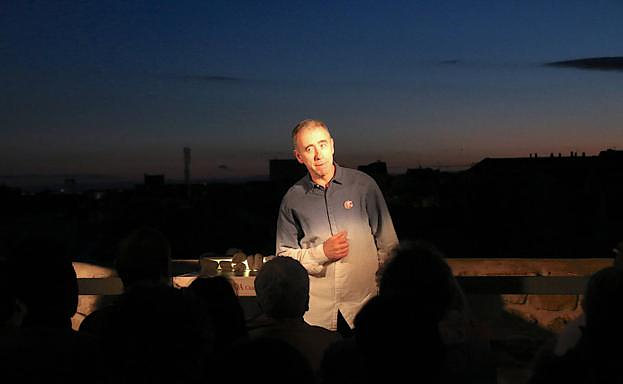 The Storytelling Festival "In Ubeda it's told returns to Ubeda to visit different squares and patios in the World Heritage city. This year, all types of audiences will be able to enjoy the stories of narrators representing different parts of the country. It takes place on the night of San Juan and features a variety of activities. This event has already celebrated 23 editions.

It began with two highly-publicized proposals. They were chosen for their quality as well as the setting. Claroscuro, a prestigious company whose productions often feature puppets and actors presented "Where the Stories Go" last Tuesday. Beautiful work in both the text and the staging. The setting was the church of San Lorenzo which was saved by the Huerta de San Antonio Foundation for cultural purposes.

On Wednesday, you could enjoy the evening Tales from the Battlements'. It was presented by Nono Granero from Ubet in 2 sessions: one at sunset, and the second at night. It took place on Calle Cava in the Torreon del Portillo del Santo Cristo's highest section. The narrator's words carried the audience to the top, while the magnificent views captivated the eyes.

Last night, the La Beltraneja bar and the church San Lorenzo hosted simultaneous sessions for adults. They were presented under the title "Tales on the threshold" and featured Carles Garcia and Paula Carballeira. You can also listen to "The minimum story of every day" from Radio Ubeda (Cadena Ser) starting at ten past twelve in afternoon and continuing through tomorrow, Saturday.

The programming will continue for another two days. Today's stories will start at half past eleven in Occupational Center's Occupational Center. They'll be accompanied by 'Stories For Everyone', a session funded by Obra Social La Caixa. The activity will be continued at half past seven on Radio Ubeda, with 'Cuentos con Buena Onda’, featuring the voices of Eugenia Manzanera and Pep Bruno. The day will come to an end with Tales in the Palace. This will take place in the courtyard at the Anguis Medinilla Palace at nine o'clock at night. All the narrators will be sharing stories that are geared towards families. This event will be used for the delivery of 'La Tragantita,' the festival's mascot. It is presented to an individual or entity who has been named an honorary member. It will be the City Council of Ubeda in this instance.

Tomorrow, Saturday will be the final day of the festival. Two proposals will be made. The session entitled "In the mouth the wolf" will be held at twelve noon in Plaza de Santo Domingo. The traditional "Tales from square-to-square" will be held at nine o'clock in the evening. This will include a tour through the historic center that takes place where all of the narrators will participate. The route will begin at the Plaza Juan de Valencia and continue to the Plaza de los Carvajales, Puerta de Granada and finally end in the Casa de las Torres. This is all for families, except the last stop which is open only to adults.

‹ ›
Keywords:
CuentosAlturaInicioFestivalUbedaCuenta
Your comment has been forwarded to the administrator for approval.×
Warning! Will constitute a criminal offense, illegal, threatening, offensive, insulting and swearing, derogatory, defamatory, vulgar, pornographic, indecent, personality rights, damaging or similar nature in the nature of all kinds of financial content, legal, criminal and administrative responsibility for the content of the sender member / members are belong.
Related News