Tensions in the Taiwan Strait reached their highest level in decades after a visit by US House Speaker Nancy Pelosi earlier this month, which angered China. 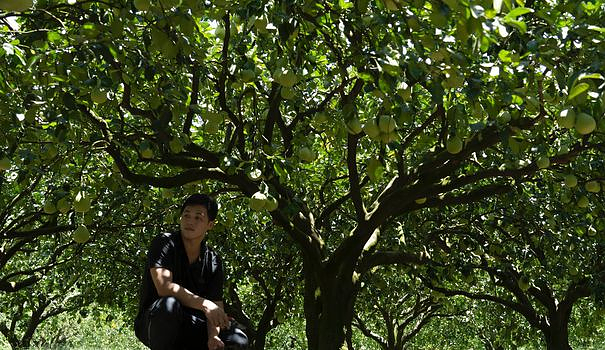 Tensions in the Taiwan Strait reached their highest level in decades after a visit by US House Speaker Nancy Pelosi earlier this month, which angered China.

Beijing, which considers the democratic island of Taiwan as its own, responded by staging military maneuvers, launching missiles off the island, and torpedoing exports of certain fruits and fish to China with new export bans. import.

The overall impact of the latest Chinese economic sanctions is limited. But producers like Mr. Ou are paying a painful price.

"Orders placed on the continent have all been cancelled. Our grapefruits have no possibility of being sent there," he says.

For several decades, its operation in Ruisui, Hualien County, has shipped 180 tons of citrus to the mainland each year.

"Customers are waiting for the pomelos, but we can't do anything, it's a political problem," he laments.

Taiwanese farmers and producers increasingly have to contend with China's import bans, which Beijing more often justifies by citing sudden irregularities rather than a direct link to politics.

After Nancy Pelosi's visit, China banned citrus fruits and several fish from Taiwan, while suspending its own exports to the island of sand used in construction.

The month before his visit, Beijing banned imports of grouper, the vast majority of which had previously been destined for Chinese consumers.

Taipei said the move was politically motivated, while China said it found some fish contaminated with banned chemicals.

The previous year, imports of pineapples had been suspended, with Chinese authorities claiming to have found parasites in shipments.

At a grouper site in Pingtung, southern Taiwan, producer Hans Chen said he would be "severely affected" if sanctions were not lifted by the end of the year.

The ban was imposed without any notice and came at the worst time for producers already battered by the pandemic, he explains.

According to the fish farmer, his business and others are too dependent on the lucrative Chinese market and need to diversify away from their neighbour.

“Everyone thought that the (health) situation was slowly improving, that the Chinese market was gradually stabilizing and that prices were going to increase, and therefore there would be some profits to compensate for past losses,” says- he. "That's why everyone's concerns and the consequences (of the sanctions) are very important."

China remains Taiwan's largest trading partner, with the continent accounting for 28% of its exports.

Taiwan's government and businesses have, however, encouraged economic diversification in response to the increased aggressiveness of the regime presided over by Xi Jinping.

Since 2016, Taiwanese President Tsai Ing-wen has pursued a policy of increasing trade with South and Southeast Asia.

Taiwan is also enjoying renewed sympathy from like-minded democracies in the region.

Much of last year's pineapple harvest was saved when Japanese consumers rushed to buy "freedom pineapples" in a show of solidarity.

"China is very selective about the mechanisms of economic sanctions against Taiwan," Christina Lai, a researcher at the Taiwanese government body Academia Sinica, told AFP.

Taiwan is thus one of the world's largest producers of semiconductors, but Beijing has avoided hitting this market on which it relies to satisfy its domestic demand.

China "has always refrained from harming its domestic economy and tech industry. Beijing cannot afford to ban the most essential imports from Taiwan: semiconductors, advanced instruments and machinery," she adds.

The general impact on the Taiwanese economy is thus "very limited", observes Fan Shih-ping, professor at the National Taiwan Normal University. "It's a political manipulation, China wants to show that it leads the boat and controls Taiwan," he adds.

But for farmers who have fallen victim to the latest escalation in tension, the scale of the sanctions is like an earthquake.

"We are asking for help from the government, if they can help us in any way," Ou said. "We have to start finding outlets inside the country. It's a real headache."