Svaneti is still an insider tip for ski vacationers

No question, Giorgi Goshteliani is a real Swane. 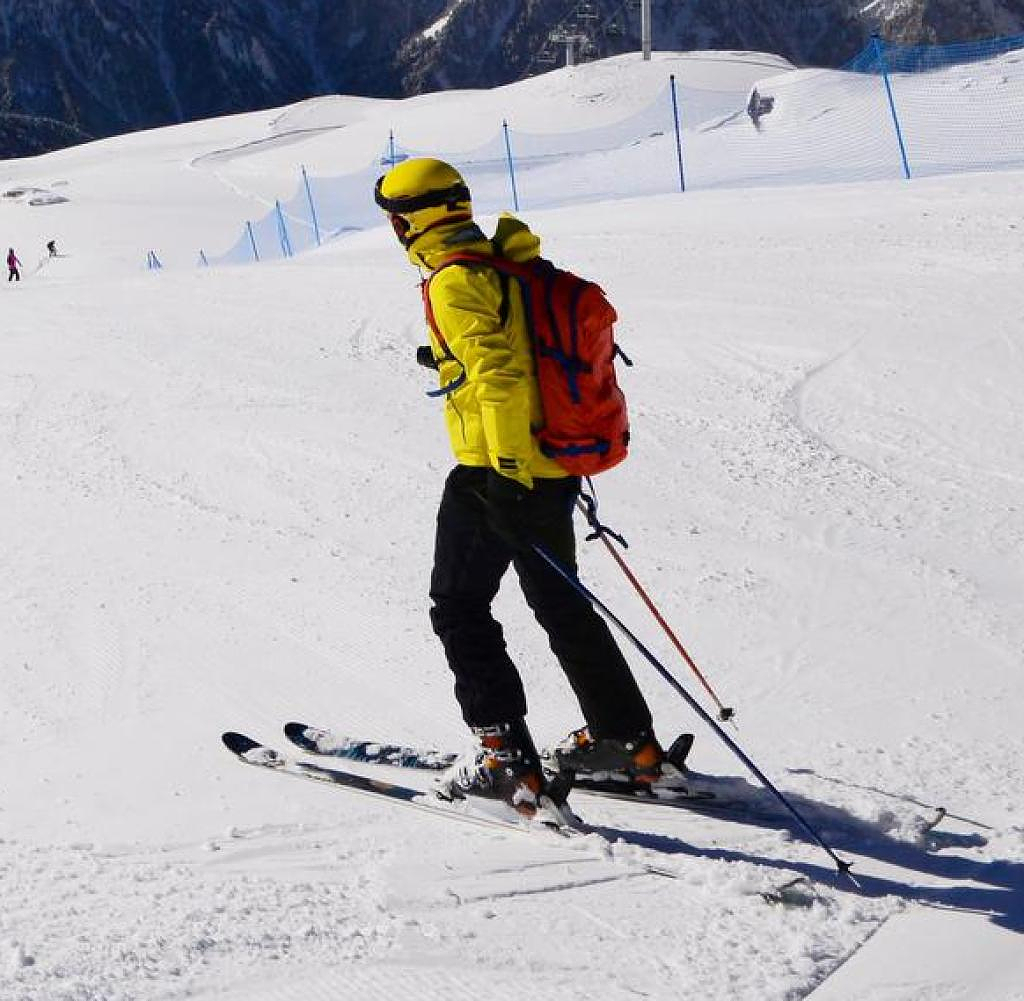 No question, Giorgi Goshteliani is a real Swane. Cigarette in hand, he steers his rickety off-road vehicle over the icy road, honks minibuses to the side, slides around corners, turns up the music and makes phone calls. There is absolutely no need to rush. When he parks at the valley station shortly after ten o'clock, the lift is still standing still. One or two dozen winter sports enthusiasts shuffle through the snow, otherwise nothing is going on. Goshteliani shrugs his shoulders, he says people drive fast in Svaneti and get a coffee first.

The lanky, bearded 30-year-old studied international relations in Georgia's capital, Tbilisi. "But office life in the city was never an option for me." Instead, he is now a ski instructor and deep snow guide in the mountains of his homeland. And his place of work is the most modern ski resort in the Caucasus.

In 2016, the ski arena opened on the 4858 meter high Tetnuldi, Georgia has so far invested 38 million euros in the flagship project, which is a good half hour's drive from the mountain town of Mestia. With three chairlifts in a row, visitors float up to the mountain station at 3165 meters. The all-round view becomes more fantastic with every passing minute: the ice pyramid of the Tetnuldi rises in the foreground, on the right, ridge after ridge, untouched snowy mountains spread out. And in the background the 4700 meter high horns of the Ushba pierce the deep blue sky.

In the Alps one would have to share such a winter dream with hordes of snow enthusiasts. Here in Svaneti, however, one rushes down the wonderful, wide, relatively empty slopes in disbelief. This winter they are a little emptier: In the current season, around 20 percent fewer ski tourists are expected in Georgia than in 2019, the last winter before Corona.

The reluctance may also have something to do with the war in Ukraine, which is not exactly having a positive effect on the desire to travel. Nevertheless, in addition to locals and Russians who are enthusiastic about skiing, you also meet skiers from Austria and Switzerland, Norway and the USA, who don't let their fun in the snow spoil them.

Modern winter tourism only began in these remote high valleys after the turn of the millennium. The access road through the Inguri river gorge was often closed in the past. And the Svans were long thought to be a savage people, with armed bands levying tolls or kidnapping travelers. Already the ancient Greek historian Strabo, 63 BC. Born in BC, described the Svans as brave, bold warriors. Today, no visitor has to reckon with robberies, at most – see above – with bold traffic habits.

A rustic lift was built on the slope above Mestia in the 1950s, but only locals skied here for decades. Until then President Mikheil Saakashvili decided in the late 2000s to particularly promote Svaneti as a tourist region. With newly hired police officers and attack helicopters, he overthrew the local clans. In 2010, the road to Mestia was renovated, and shortly afterwards an airport was opened in Kutaisi. And used lifts from Austria were planted in the mountain forest above the town.

Hatsvali is the name of the older and smaller of the two ski areas near Mestia. Although it is not as spectacular as Tetnuldi in the high Alps, it can be reached on foot from the village. With skis on their shoulders, visitors trudge down icy roads sprinkled with cow dung.

Stone houses with wooden balconies line the streets, behind them towers with protruding arrow slits, which are typical for the area. As archaic as it all seems, the signs of rapid change are unmistakable. Almost every house is an inn, restaurant or shop, shells of new hotels are growing everywhere in the Caucasus sky.

Those who pant up the road to the valley station will be overtaken by a caravan of minibuses with skis and snowboards on the roof. You speed past the turnoff to Hatsvali and continue to Tetnuldi. In the morning, you sit all alone in the Hatsvali lift, which hums up between powdered trees. Once at the top, you have the layer of powder that fell on the groomed slope overnight all to yourself.

A luxury that could soon be over. It is planned to link Hatsvali and Tetnuldi into a huge ski link with more than 100 kilometers of slopes. Georgia's tourism professionals dream of a panoramic restaurant like in the "James Bond" films on Tetnuldi. And at some point, gondolas will whiz down to the Uschba Glacier to make skiing possible in summer too.

Hardly anyone would be happier than Mikheil Chartolani, whom everyone just calls Misho. The 18-year-old comes to the Hatsvali lift in the morning in a tight racing suit. Chartolani is on the Georgian national team and trains here several times a week. "The Tetnuldi is too far away," he says, "and the slopes are more demanding here." Cat-like Chartolani races between the slalom gates, his knees swinging to the left and right. His mother was ten times Georgian champion in slalom and giant slalom, his father was a mountaineer and ski instructor.

In Georgia he has already won a few races, says Chartolani, but internationally it is difficult. “In the summer we only do strength and endurance training. That's a huge disadvantage compared to the Alps, where you can ski all year round." The glacier ski area could help him achieve his big goal: "It's my dream to ski for my country at the Olympics."

Currently, skiing in Georgia is an expensive hobby for a small local elite. But that could change soon. "The government is just discovering that we are a mountain people and that we have a lot of snow," says Eka Chagela, vice-president of the Georgian Ski Association. Ski instructors from the Alps are already training Georgian colleagues.

The 47-year-old hopes that there will soon be a sports school in every mountain region. "Even if our talents will probably never become world champions, they could still open ski schools or hotels and give impetus to their home towns." That's true. Winter sports have great potential, especially in Svaneti. In some places there is snow for eight months of the year. More skiers and snowboarders could boost tourism enormously. And thus stop the rural exodus – or even reverse it.

"When I was a child, there were no hotels in Mestia and hardly any restaurants," says ski instructor Giorgi Goshteliani. Many young people, like him, went to Tbilisi to study and stayed there. He came back. “I liked it better in the mountains. Living together is warmer.” In the city, everyone is busy with themselves. Of course it is difficult to find a job in Svaneti.

Goshteliani has four siblings and 20 cousins, and through his tours he knows many people in the neighboring villages. He proudly tells of churches from the tenth century, of frescoes and icons, of pilgrimages and his family's defense tower. In 1996 the mountain villages of Svaneti were declared a World Heritage Site. "My ancestors have lived here since the twelfth century," he says, "I would never sell my family's land."

So do the other Svans. So far, foreign investors can only participate in joint ventures. And nobody is allowed to build houses that are higher than the defense towers. The downside is that many Svans went into debt to build boarding houses and hotels. If the tourists stay away, they lose their house and home.

But it doesn't look like it at the moment. After two full days of snow, powder addicts from Europe and America are waiting impatiently at the Tetnuldi valley station early in the morning for the lift to start. When there is fresh snow, there is a promise up here that can hardly be found in the Alps: untouched deep snow slopes for everyone. Tetnuldi is a paradise for freeriders and tourers.

From the mountain station they trudge along a ridge, a caravan in colorful functional jackets, with avalanche backpacks and snowboards under their arms or with skis on their shoulders. One after the other, they tumble down the edge and weave cheering through virgin, ankle-deep powder snow. A few lift rides later, the entire slope, hundreds of meters wide, is adorned with the intarsia of the blissful ones – a tightly woven braided pattern of ski and snowboard tracks.

Arrival: Wizz Air offers direct flights from Berlin, Dortmund, Memmingen to Kutaisi. Marshrutkas, the Georgian minibuses, go from the bus station there to Mestia (equivalent to 16 euros each way).

Svaneti's ski areas: The Hatsvali ski area has four lifts and around five kilometers of well-groomed slopes in the mountain forest, degree of difficulty: mostly red and black. The Tetnuldi ski area has five lifts and is above the tree line, with a total of 20 kilometers of slopes that are wider and flatter. The lifts in both ski areas, which are connected by minibus, run until mid-April. The day pass for Tetnuldi and Hatsvali costs 40 lari (around 14 euros), for children 25 lari (around 9 euros). Adults pay 232 lari (around 82 euros) per week.

Organized trips: The organizer Alpine Welten offers twelve-day ski tours with a mountain guide to Svaneti (including flight/half board from 2490 euros, alpinewelten.com). Mountain guide Shako Margiani from Mestia can be booked for ski tours all over Svaneti (300 euros per person per day including accommodation and airport pick-up, email: shako.margiani@gmail.com).

‹ ›
Keywords:
GeorgienLänderporträtsSkiurlaubSkigebieteKaukasusRegionenporträtsWintersportSkifahrenSwanetienMestiaGiorgi GoshtelianiÖsterreichTetnuldiAlpeHatsvaliAlpine WeltTiflisKutaissiEuropaSwanenLifteReise
Your comment has been forwarded to the administrator for approval.×
Warning! Will constitute a criminal offense, illegal, threatening, offensive, insulting and swearing, derogatory, defamatory, vulgar, pornographic, indecent, personality rights, damaging or similar nature in the nature of all kinds of financial content, legal, criminal and administrative responsibility for the content of the sender member / members are belong.
Related News