Authorities estimated that 500 people, including women and children, were on and around the bridge, engaged in religious rituals, when the cables supporting it gave way shortly after dark. 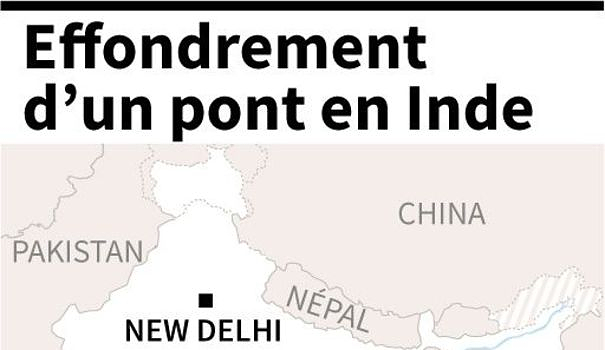 Authorities estimated that 500 people, including women and children, were on and around the bridge, engaged in religious rituals, when the cables supporting it gave way shortly after dark.

"Seventy-five people died," a local official told AFP by telephone. He said most of the victims had drowned.

Media spoke for their part of a balance sheet of at least 90 dead, unconfirmed at this stage.

A previous official report put the death toll at 60.

The bridge over the Machchhu River, located in Morbi, about 200 kilometers west of Ahmedabad, Gujarat's main city, dates back to British colonial times and had just reopened to the public after months of work.

"People were falling on top of each other when the bridge broke. They had gathered on it for rituals because of the Diwali festival. There are many women and children among the victims," ​​said an unnamed witness. identified quoted by local media.

The 233-meter-long suspension bridge was built in 1880 with materials brought from England, according to local media.

NDTV said it was reopened to the public on Wednesday after seven months of work without a security certificate being issued by authorities.

A rescue operation was launched, involving divers, boats and dozens of soldiers.

Prime Minister Narendra Modi, who was in Gujarat, where he is from, called for "the urgent mobilization of rescue teams", and the provision of aid for all victims, his cabinet tweeted.

Accidents on old and poorly maintained infrastructure are common in India, especially on bridges.

In 2016, the rupture of a footbridge over a busy street in the city of Kolkata (east) caused the death of at least 26 people.

In 2011 at least 32 people died when a bridge collapsed on which were a crowd of festival participants in northeast India, about 30 kilometers from the city of Darjeeling.

Less than a week later around 30 people were killed in the rupture of a footbridge crossing a river in the state of Aruchnal Pradesh (northeast).

In 2006, at least 34 people were killed when a 150-year-old bridge collapsed on a passenger train at a station in the state of Bihar (east).