Students from the IES Garcia Lorca visit Armilla Air Base

Along with four other municipalities in the area, Churriana de la Vega lives each day with the magnificent view of one the oldest military airports in Spain. 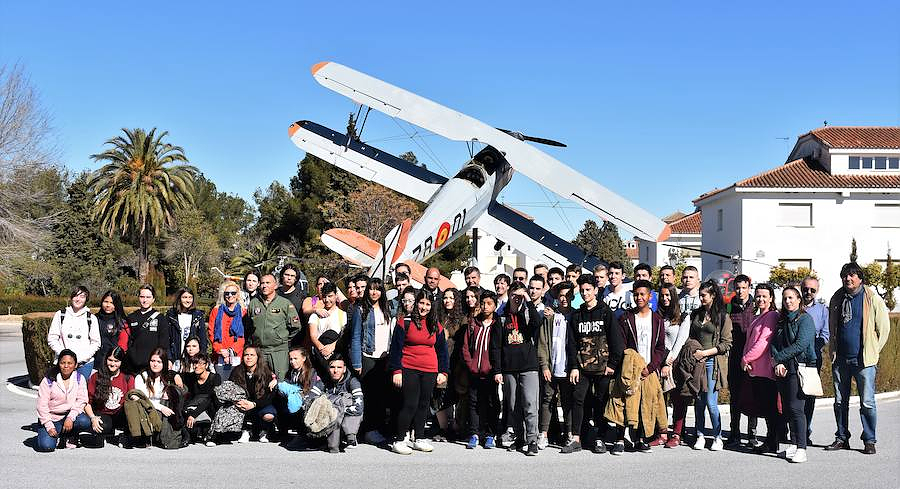 Along with four other municipalities in the area, Churriana de la Vega lives each day with the magnificent view of one the oldest military airports in Spain. The Armilla Air Base is the base for the 78th Wing helicopters. It covers an area of approximately 360 hectares with a 9-kilometer perimeter.

The 4th ESO students of the IES Federico Garcia Lorca were accompanied by the Government Team, center management and other members. They visited the military installations with Colonel Luis Garcia –Almenta Lopez Muniz, the head of the Air Base, who gave a detailed explanation of its peculiarities and the close relationship it has with the surrounding municipalities.

In recognition of his institutional cooperation that led to the creation of the Air Base sports program, the Colonel was presented with a gift by Mayor Antonio Narvaez. This agreement envisages the creation of a circuit that includes a bike lane, a pedestrian path and improvements to the perimeter infrastructures.

The mayor thanked Colonel Garcia-Almenta and invited him to deepen their institutional relations and citizen's understanding of the vital work and public service our Armed Forces provide at the Armilla Air Base.

After touring the Air Base Museum, the Plaza de Armas and the bunker, the Churriana Expedition witnessed some of most remarkable moments that a helicopter could offer in the Patrulla Aspa exhibition. This is the acrobatic flight team made up five Eurocopter Colibri, which has been active since 2003.

Despite strong winds, helicopters performed some of their most risky maneuvers, including the Rienda takeoff, the Serranito and the Rotura Espana. They were also present at the exhibition with El Fandi, a bullfighter, and David Fandila.

‹ ›
Keywords:
AlumnosGarciaLorcaVisitanBaseAereaArmilla
Your comment has been forwarded to the administrator for approval.×
Warning! Will constitute a criminal offense, illegal, threatening, offensive, insulting and swearing, derogatory, defamatory, vulgar, pornographic, indecent, personality rights, damaging or similar nature in the nature of all kinds of financial content, legal, criminal and administrative responsibility for the content of the sender member / members are belong.
Related News