These negotiations, which were scheduled for November anyway, "will make it possible to define how employees will be able to benefit, before the end of the year, from the exceptional results generated by TotalEnergies, while also taking into account inflation for the year 2022". 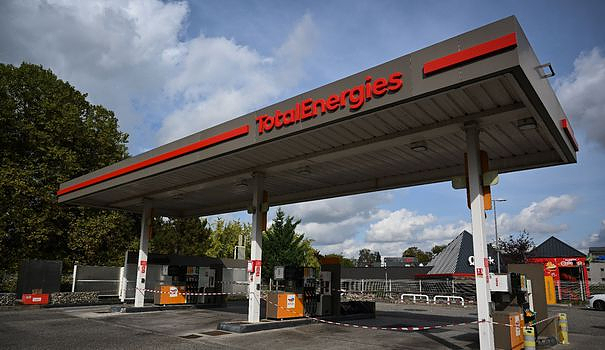 These negotiations, which were scheduled for November anyway, "will make it possible to define how employees will be able to benefit, before the end of the year, from the exceptional results generated by TotalEnergies, while also taking into account inflation for the year 2022". , assures TotalEnergies.

Since the start of the strike ten days ago, the CGT has been demanding a 10% increase in wages - 7% for inflation, 3% for the sharing of wealth - the French energy giant having earned $10.6 billion in profit in the first half of 2022.

The Minister for Energy Transition, Agnès Pannier-Runacher, welcomed the announcement by TotalEnergies, believing that "this conflict must end". "I would like to reaffirm the government's very firm appeal to the leaders and trade unions of Total and Esso: a solution must be found without delay within the framework of social dialogue, which must take place within companies. The French must not suffer any more the consequences of a social movement. This conflict must end," she said.

Referring to a "rush to service stations", she urged "all our fellow citizens not to stock up so that everyone can fill up."

On Sunday, many service stations were still facing supply disruptions, with queues of several dozen cars hoping to be able to buy a few litres, as an AFP journalist noted outside a TotalEnergies station in the boulevard de la Villette in Paris (10th).

After a total shortage of gasoline stocks, its manager decided to limit the refueling of diesel to 30 euros for motorists. A few meters further on, a nearby Esso station has run out of fuel.

"I am a taxi driver, I have not been able to work for two days", laments Thierry, 60, who has "toured Paris" and is starting to get impatient after three hours of waiting, hoping for the arrival of delivery trucks.

At 3 p.m. this Sunday, 29.7% of service stations in France were experiencing difficulties with at least one product (against 21% on Saturday), said the Ministry of Energy Transition (MTE).

Ms. Borne and Ms. Pannier-Runacher recalled that the trucks had been authorized to circulate all weekend to deliver fuel, that the government had drawn on strategic stocks and increased imports.

"These measures have enabled an increase in deliveries of around 20% compared to the usual flows. These deliveries are gradually arriving at service stations and professional networks. These additional volumes should allow an improvement in the situation throughout Monday," said Agnès Pannier-Runacher.

On Saturday, the CGT of TotalEnergies had taken a first step to negotiate: in an open letter to the CEO Patrick Pouyanné, it agreed to put aside its demands in terms of hiring and investments to open negotiations on wages from Monday.

Management, on the other hand, stressed on Sunday that it had already brought forward the mandatory annual negotiations (NAO) to November without "waiting for January 2023 as is usually the case", and that it is therefore taking a further step by agreeing to negotiate. from October.

Pending an exchange scheduled for Monday with management, the strike was renewed on Sunday at 2 p.m., according to the CGT interviewed by AFP.

This movement was launched ten days ago in the refineries and fuel depots of TotalEnergies and the American group Esso-ExxonMobil.

As for TotalEnergies, the group's largest refinery, based in Normandy, that of Feyzin (Rhône), the "bio-refinery" of La Mède (Bouches-du-Rhône) and the Flandres fuel depot near Dunkirk ( Nord) are "still completely at a standstill", according to the CGT.

The two sites of the American Esso-ExxonMobil in Normandy and Fos-sur-Mer (Bouches-du-Rhone) are "still at a total stop on Sunday", also indicated the elected CGT Christophe Aubert.

The CGT demanded Friday wage increases more substantial than those proposed by the management, which according to Mr. Aubert suggested "5.5% increase on average with a bonus of 3,000 euros for 2023".

An increase "which is not sufficient to cover galloping inflation, which is more in a context of superprofits", estimated Christophe Aubert.