Yesterday, thousands of Ubetans marched the streets under a shining sun to celebrate Corpus Christi and to attend the appointment with Blessed Sacrament. 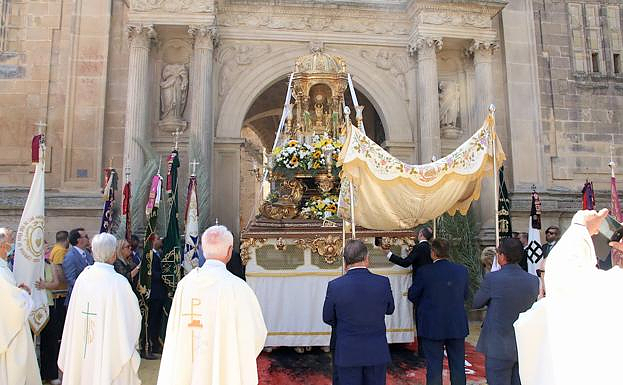 Yesterday, thousands of Ubetans marched the streets under a shining sun to celebrate Corpus Christi and to attend the appointment with Blessed Sacrament. After two years of inactivity, a parade was formed that was filled with enthusiasm and rekindled a sense of normalcy. The procession saw a large participation from representatives of various brotherhoods and brotherhoods, religious groups, collectives, and other city organizations, as well many devotees.

The tour started in the historic center of Ubeda after a previous Eucharist was celebrated at the Minor Basilica Santa Maria de los Reales Alcazares. Many children made their first communion this season attended the parade. The Virgin of Guadalupe was also present.

The itinerary was decorated with awnings, altars, and other hangings. They were commissioned by religious groups and brotherhoods from the city, as well as residents living along the route. Sedge grass was also spread on the route as per the tradition.

As preparation, different cults were held by the Ubetense section in Nocturnal Adoration during the preceding days. One of these was the traditional Triduum in Santa Clara's church or the general Vigil of Corpus Christi.

A week earlier, Joaquin Rafael Robles Medina was the parish priest at Santo Tomas Apostol, and the Proclamation for the Corpus was also made. The priest, using extensive documentation and reflecting on the meaning of the festival, conducted an investigation into its history in Ubeda. The priest combined the past and present to give a very instructive speech that required devotion.

‹ ›
Keywords:
CallesEngalanadasProcesionCorpusChristi
Your comment has been forwarded to the administrator for approval.×
Warning! Will constitute a criminal offense, illegal, threatening, offensive, insulting and swearing, derogatory, defamatory, vulgar, pornographic, indecent, personality rights, damaging or similar nature in the nature of all kinds of financial content, legal, criminal and administrative responsibility for the content of the sender member / members are belong.
Related News