Start of the "Project of the Century"

Exactly one year after the lawyers of the economic authority gave the green light for the first construction phase of the new U5 subway line and issued the planning approval for the route between City Nord and the Bramfeld district, construction officially begins there on Friday afternoon. 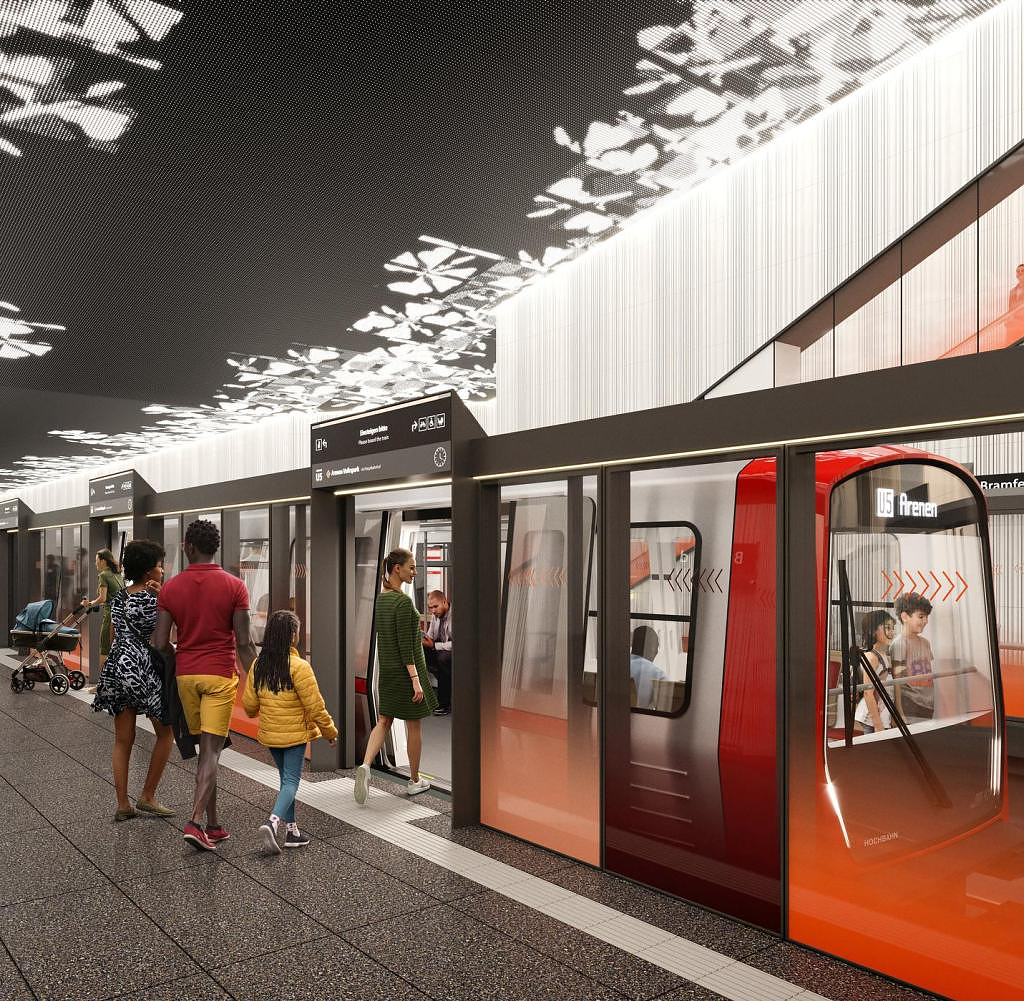 Exactly one year after the lawyers of the economic authority gave the green light for the first construction phase of the new U5 subway line and issued the planning approval for the route between City Nord and the Bramfeld district, construction officially begins there on Friday afternoon.

Mayor Peter Tschentscher (SPD), Transport Senator Anjes Tjarks (Greens) and the CEO of Hamburger Hochbahn, Henrik Falk, will symbolically break ground. Later in the construction process, the still unnamed tunnel boring machine will lower itself into the ground at the point not far from today's U1 station Sengelmannstraße and begin to dig around six kilometers of tunnel under Hamburg's north-east.

Transport Senator Tjarks spoke in advance to WELT of an "important milestone" - not only in the U5 project, which is the first major rail project for the Hanseatic city in about four decades. The start of construction of the U5 route also means a milestone "for sustainable, urban mobility and the mobility revolution," says Tjarks. "Plans and mobility ideas are now becoming rails and connections on which the people of Hamburg can be mobile in a climate-friendly, fast and comfortable way," promises the Green politician, who recently often saw himself in an unusual role.

For a long time, the Greens were among the advocates of another rail idea for the Hanseatic city: that of a tram, called Stadtbahn in Hamburg. Among other things, because this would have been cheaper to build and faster to build than a subway.

But all attempts of the past decades failed. With the exception of the U4, which connects the new HafenCity with the city center on a short stretch, Hamburg remained without any new rapid transit connections. Entire districts and with them hundreds of thousands of Hamburg residents remained cut off from the rail network despite promises to the contrary. That is precisely why one should believe Tjarks when he has been making clear his support and sympathy for the U5 project for months and on the day of the official start of construction.

The Hamburger Hochbahn, which operates the subways in the Hanseatic city as a municipal transport company and is also responsible for the construction of the U5 line, speaks of a "project of the century". The entire line is expected to be completed by the end of the 2030s. It should then run around 24 kilometers from Bramfeld via City Nord to the main train station and from there through the city center via the university and the University Hospital Eppendorf (UKE) to the sports and event arenas and the Volkspark in Stellingen.

23 stops will be built on the new line, seven of them with the option to transfer to the existing U-Bahn and S-Bahn network. The U5 will be fully automated and will also set new standards for the rapid transit in Hamburg in this area.

Around 270,000 passengers will then use the subway every day. 180,000 residents and tens of thousands of jobs will be connected for the first time or better to the Hamburg rapid transit network. The previous four subway lines in the Hanseatic city are mainly north-south connections. The new U5 will essentially represent an east-west connection and will also better connect parts of the city on the outer edges. Residents from Steilshoop, for example, will be able to reach the university in just 22 minutes without having to change using the U5. So far, a total of 37 minutes has been required for the same route with the bus lines 26 and 5 as well as the U1 and travel time.

The U5 also enables "significantly more attractive travel times" throughout the network through links to existing lines, according to the Hochbahn. How much time can be saved can be seen on the Jarrestraße – Hauptbahnhof route. What takes 21 minutes today will in future take seven minutes with the U5. But switching to the U5 will also be worthwhile for longer distances. From Allermöhe in the southeast of Hamburg, for example, passengers can reach the UKE in 30 minutes after changing from the S-Bahn to the U-Bahn, twelve minutes faster than today. From Harburg in the south-west of the city to Winterhude it will now take 24 minutes, 16 minutes less.

The first test drives on the U5 are scheduled for the end of 2027. The costs for the new construction of the first section of the U5 amount to around 1.8 billion euros. The costs for the other sections of the U5 are currently being determined. Because Hamburg wants support from the federal government for the U5 project and a corresponding application for funding will be submitted this year. This will then also receive information on the total costs, said Falk at the presentation of the details of the subway construction.

To ensure that the underground does not have a bad environmental balance compared to the Stadtbahn, the city and elevated railway have committed themselves to building the U5 in an environmentally friendly way. The construction of the new line would consume up to 2.5 million tons of CO2 if it were built conventionally. Emissions are to be reduced by 70 percent through the use of special building materials, the adaptation of bus stops, sustainable soil management and the use of green electricity. Tjarks, Tschentscher and Falk will therefore actually break ground with a spade and not, as is usual, with an excavator.

‹ ›
Keywords:
WittegenanntVedderJuliaHamburgTjarksAnjesÖffentlicher Personennahverkehr (ÖPNV)UBahnenInfrastrukturCity NordMusikJarrestraßeBündnis 90Die GrünenGrüneEuropaVolksparkAnjes TjarkU5UKEBramfeldAllermöhe
Your comment has been forwarded to the administrator for approval.×
Warning! Will constitute a criminal offense, illegal, threatening, offensive, insulting and swearing, derogatory, defamatory, vulgar, pornographic, indecent, personality rights, damaging or similar nature in the nature of all kinds of financial content, legal, criminal and administrative responsibility for the content of the sender member / members are belong.
Related News