Speedster with the Palestine flag storms onto the lawn, Tunisian fans cheer

During the group match between Tunisia and France at the World Cup in Qatar, a speedster again gained access to the field and fooled the security forces. 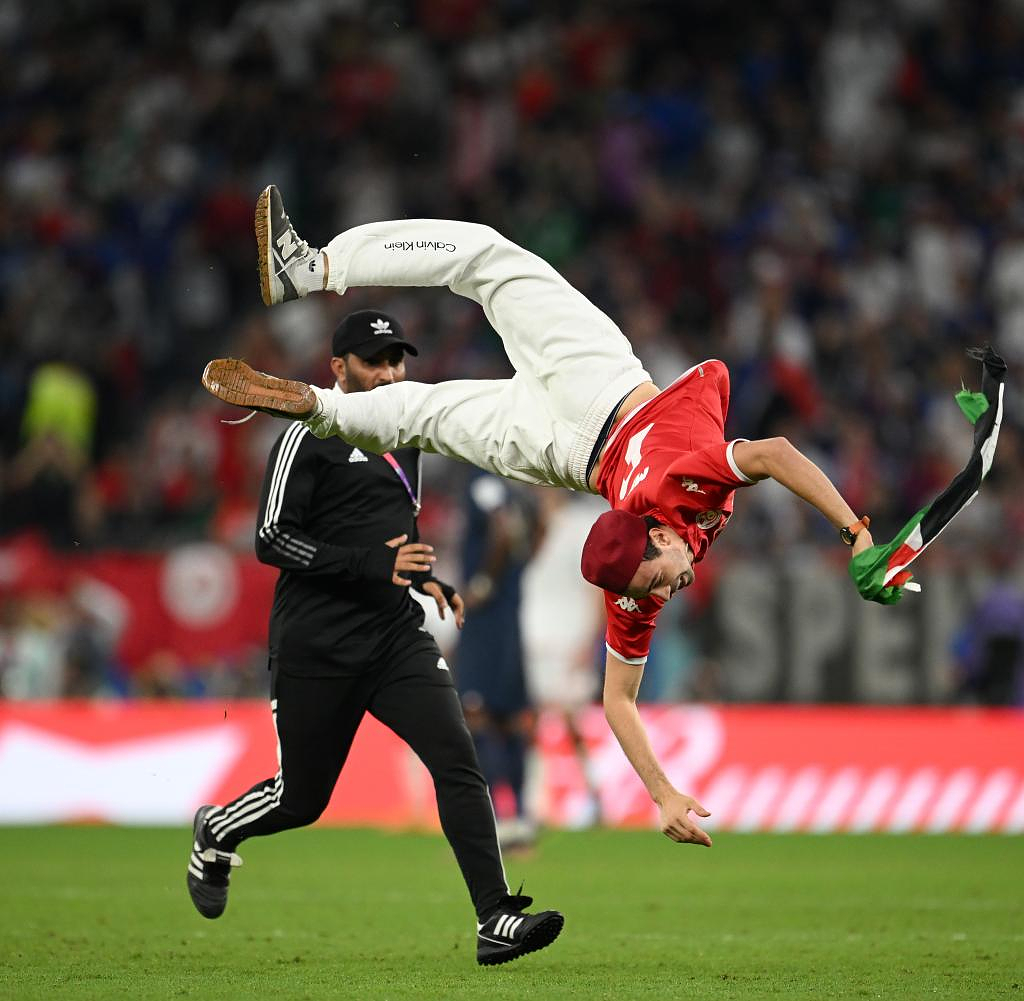 During the group match between Tunisia and France at the World Cup in Qatar, a speedster again gained access to the field and fooled the security forces. The man walked onto the pitch with a Palestinian flag in Al-Rajjan on Wednesday and hit one more flack before security forces roughly removed him.

The Tunisian fans then loudly shouted "Palestine, Palestine". Tunisian substitutes who were talking to the stewards were pushed aside. Tunisia is one of the countries that approved a UN resolution recognizing Palestine.

The scene could not be seen during the TV broadcast, as the management of Weltsignal has consistently switched to neutral camera angles in the event of such actions for several years, on Fifa's instructions. This procedure is now also common in the European cup competitions or the Bundesliga.

Only two days ago, during the game between Portugal and Uruguay, a streaker entered the field. The man who stormed the pitch in the second half of the group game in Doha had a rainbow flag in his hand. His Superman T-shirt read "Save Ukraine" on the front and "Respect for Iranian Woman" on the back.

According to consistent media reports from Italy and England, the man was an Italian who himself played top-flight football for clubs in his homeland, India and Jordan. Accordingly, he has appeared as a speedster several times in international competitions such as the 2010 and 2014 World Cups, the Champions League and the Italian Serie A.

‹ ›
Keywords:
Fußball WM 2022Frankreich FußballnationalmannschaftTunesien FußballnationalmannschaftSkandale Im Sport
Your comment has been forwarded to the administrator for approval.×
Warning! Will constitute a criminal offense, illegal, threatening, offensive, insulting and swearing, derogatory, defamatory, vulgar, pornographic, indecent, personality rights, damaging or similar nature in the nature of all kinds of financial content, legal, criminal and administrative responsibility for the content of the sender member / members are belong.
Related News