Edvard Munch devoted himself to the really big themes: he painted farewells, despair, and death. 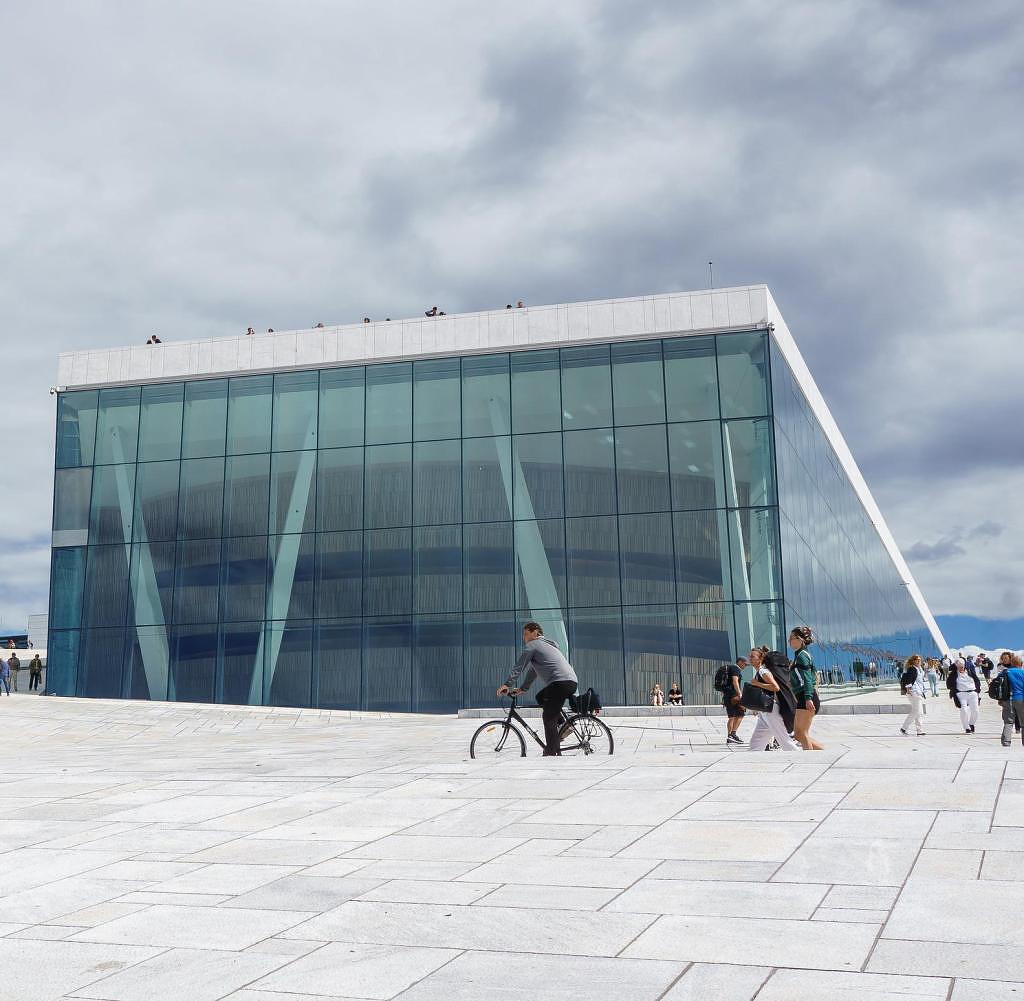 Edvard Munch devoted himself to the really big themes: he painted farewells, despair, and death. The dying and those left behind in mourning. Naked, vulnerable figures. Abandoned and those who remain lonely even in society. He expressed feelings that people are often ashamed of, that they like to suppress.

Munch didn't know how to deal with it. But the Norwegian artist (1863-1944) captured it all in paintings with titles like "Anxiety," "Melancholy," and "Jealousy." This made him world famous. As a viewer, one feels surprising: consolation.

This can be experienced in the new National Museum in Oslo. There, the Norwegians have dedicated their own room to their Munch, in which 18 of his works hang, including the most famous: "The Scream". In 2012, a version of the image sold at auction for $119.9 million. A sum that had never before been paid for a painting at a painting auction.

The National Museum itself is also a superlative as it is now the largest art museum in Northern Europe. Opened in June, Oslo is finally turning into an exciting cultural metropolis.

It is not the only new building in recent times: the new Munch Museum only welcomed its first guests in October 2021, a bold building directly opposite the white opera house, which seems to be floating in the Oslofjord like an iceberg. In 2020 the remarkable Deichman library was created. It was the opera that started the upgrading of the Bjørvika waterfront in 2008. Since then a lot has happened.

The promenade by the water now measures nine kilometers. In general, Oslo is easy to explore on foot. Those who set up their quarters in the center near the Karl-Johans-Boulevard and the main train station can walk in any direction. Down to the water and past Akershus Fortress. Up to the Ekeberg Park. Or along the river Akerselva, from the fjord up to the nightlife district of Grünerløkka with its cafés, restaurants and bars.

Norway's capital has become a city break destination worth more than a day visit on a Nordland cruise. Art – and last but not least Munch – made a significant contribution to this.

How is it now, the new Oslo flagship? Museums like to be judged from the outside first, as if they had to be architectural art themselves. The National Museum is almost hidden behind the Nobel Peace Center, it has a forbidding effect. Did that work? The “Süddeutsche Zeitung” found it more of a “problem”. After all, the museum should be a place of identification for Norwegians.

When you step inside, nothing seems closed anymore. The stronghold for 600 million euros houses the country's most important art treasures. The collection cannot be managed in one day, 6500 works are exhibited in 86 rooms. They were brought together from five art houses in the city and brought together under one roof.

The collection on the first floor is divided into two: design before and after 1900, each divided by theme. You walk from room to room as if you were walking through a modern castle. You can see everything from antique busts to Chinese porcelain to Norwegian glass art - and then of course all the stylish splendor of Scandinavian design. Fundamental questions are raised, such as: Can machines create beautiful things at all?

On the second floor, visitors can see paintings from practically every era of art and enjoy the big names and their works. There is also Sami art on display, for example by Hannah Ryggen and John Savio, as well as contemporary art.

If you step outside again, you can sit down in one of the outdoor restaurants in Aker Brygge, right by the water. Or continue walking to the Astrup Fearnley Museum of Modern Art, designed by Renzo Piano. International contemporary art is shown there in regularly changing exhibitions. Stars like Damien Hirst can be found as well as artists who are probably unknown to the general public.

The Henie Onstad Art Center, which is one of the few sights in Oslo, is also appreciated. Other sightseeing spots such as the Fram Museum, on the other hand, can be easily reached in a few minutes by ferry across the fjord.

Sometimes the art in Oslo is also in the middle of public space. If you walk west past Oslo Castle, you will eventually reach Vigeland Park with stone and bronze sculptures by the Norwegian sculptor Gustav Vigeland (1869-1943). They show naked people, dancing, crying, laughing, consoling themselves. The highlight is a 17 meter high monolith of intertwined bodies.

In the water in front of the opera house rises the installation "She Lies" by Monica Bonvicini, an interpretation of Caspar David Friedrich's painting "The Ice Sea". And in front of the Munch Museum, a massive bronze statue by British artist Tracey Emin towers into the sky.

Finally, don't miss the new Munch Museum. If you ask the Norwegians in Oslo what they think of the building, you hear a lot of mockery. "I like Munch, but I don't like the museum at all," says one architect. The building reminded some of crash barriers piled one on top of the other. But the same applies here: it's what's on the inside that counts. And they fascinate.

The industrious Munch left Oslo more than 26,000 paintings and drawings. There are also 900 works donated by a close friend of the artist. The museum dedicates seven of the 13 floors to art. Munch left not only paintings, but also drawings, prints, works on paper, sculptures and photographs. The main exhibition is divided into twelve subject areas.

One room features three versions of the world famous "Scream" (which incidentally serves as a template for the scream emoticon) - a painting, a drawing, and a print. Only one variant is shown at a time in order to protect the works from too much light.

Another large hall shows three huge monumental paintings that Munch once painted for the ceremonial hall of Oslo University. Pop art master Andy Warhol also took some of Munch's works and recycled the motifs in his own form.

The Munch Museum also takes unusual paths. A selection of images could be seen temporarily until August 28, with a somber composition by the Norwegian metal band Satyricon filling the hall. The band had matched the music to the artwork. That came across very atmospherically and was a real experience.

Like every good museum, this one makes the artist tangible – and thus his works comprehensible. Munch's mother died of tuberculosis when the boy was just five years old. Son Edvard is a sickly child. He spends all winters in bed at home. So he starts painting. He was convinced early on that he would become a great artist.

Munch apprenticed with the painter Christian Krohg, but Kristiania - today's Oslo - soon became too small for him. When the Norwegian exhibited in Berlin for the first time in 1892, he received malice – but also a lot of press. In 1896 Munch went to Paris to establish himself in the art world there. But he doesn't get the same attention as in Berlin. Back in Germany, his career picks up speed.

His health problems increase and Munch has to go to a clinic. In 1916 he retired to a suburb of Oslo to devote himself entirely to his art. The Munch Museum exhibits furnishings.

In the end, one understands the motives of his art better. "Without fear and illness, my life would be like a boat without a rudder," he once said. In love, he is repeatedly disappointed, which affects his paintings. Munch recognized that where there is passion, there is also pain. Where there is desire, there is loss.

Art always works against the background of certain social imperatives. The following can currently be identified: We should walk through life happily, self-determined and authentically every day. Munch reminds that this is unrealistic. One may find this realization disappointing. Or liberating.

A recommendation at the end, in case your skull swells from all the art. Public sauna boats are moored directly on the promenade. So you look sweating over the water, only to then jump into the 18 degree cool Oslofjord. This clears your head again for new impressions and experiences.

Getting there: There are non-stop flights to Oslo from several German airports. There is a ferry connection with Color Line from Kiel. The port city is also called at on many Norway cruises.

Money: 1 euro is around 9.90 Norwegian kroner (NOK). You don't need cash, you can pay with a credit card everywhere. But it should be adequately covered. Oslo is one of the most expensive cities in Europe. A coffee costs just under 5 euros, the pizza at the central Italian restaurant "Olivia" a good 20 euros, and a glass of wine from around 10 euros.

A walrus lady is causing a stir in Norway. First because she spent several weeks in a marina just outside the capital Oslo. Then because she has now been euthanized by the Norwegian authorities. Animal rights activists now even want to build a statue of the dead walrus.

‹ ›
Keywords:
NorwegenLänderporträtsOsloStädteporträtsStädtereisenMunchEdvardMuseenVigelandGustavNOKAkerselvaKunstEuropaDeichman BibliothekAstrup Fearnley MuseumDesignHafenviertel BjørvikaAusgehviertel GrünerløkkaEdvard MunchMunchMuseumPhilipp LaageOsloer SchlossOsloer UniversitätPromenade
Your comment has been forwarded to the administrator for approval.×
Warning! Will constitute a criminal offense, illegal, threatening, offensive, insulting and swearing, derogatory, defamatory, vulgar, pornographic, indecent, personality rights, damaging or similar nature in the nature of all kinds of financial content, legal, criminal and administrative responsibility for the content of the sender member / members are belong.
Related News