Words, then cries, insults and suddenly "Edu", furious, comes out of his hinges and is violent towards "Ali". 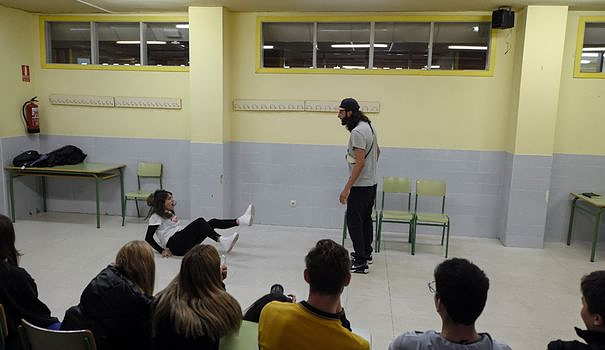 Words, then cries, insults and suddenly "Edu", furious, comes out of his hinges and is violent towards "Ali". The scene is performed in a classroom of the El Olivo high school in Parla, on the outskirts of Madrid, by two actors involved in the project "Teatro Que Cura" (The theater that heals).

In Spain - a pioneering country in Europe since the adoption in 2004 of a law introducing gender difference as an aggravating circumstance of violence - education is seen as central in the fight against violence against women, including on 25 November is the international day.

In the room, Edu first launches into a monologue about his chances of concluding the first evening with Ali, which makes the teenagers giggle... But the laughter becomes more and more rare as the romantic relationship wears off. installs and degrades.

"The idea is that the student lives this conflict and resolves it differently", without "always going through violence" like the actors, explains Susana Martin Cuezva, the therapist at the head of this project.

"If you see (a scene like this) in the street, you just think it's a couple arguing and that's it," said Patricia Garcia, a 15-year-old student. But "if you are aware" of these issues, "you understand that if people start talking badly to you, insulting you, you have to leave before things get worse".

During the show, the teenagers are invited to say if they would have handled things differently, to rewrite the scene or even to speak directly to Edu or Ali.

"I've lost my mind, you know me, I'm not like that," Edu tries, replaying the scene in front of a student.

"Yeah. First, let go of my sneakers, don't try to intimidate me," she told him, calmly. Before leaving, to the applause of the other students, while Edu starts to raise his voice again.

"The jostling, the insults, this is unfortunately what is most realistic" in the show "and it happens a lot more than you think", says Mario Carmona, sixteen years old. Disputes, "it's normal in a couple but it's good that someone tells us Attention, there it goes beyond the limits".

Set up in 2017, the "Teatro Que Cura" project has already immersed more than 9,000 high school students, mainly in the Madrid region, in this type of interactive scenario in order to raise awareness of gender-based violence, which is on the rise among children under 18. .

According to the latest official figures published in May, it is in this age group that they have progressed the most in the country with 661 young female victims in 2021 against 514 in 2020. An increase of almost 30%.

Affective and sexual education classes "reduce the risk of using gender-based violence in boys and of experiencing it in girls", concluded a Spanish government report in 2021.

"If you are taught it at school, you become aware of all this very early", recognizes Maryam Calderon, sixteen years old.

For Silvia Serrano Martin, the school psychologist at El Olivo high school, this type of show is very effective. Thanks to the theatre, the students "experience it directly". "It is a tool that is used for prevention but also to sometimes detect certain cases," she adds.

The pupils concerned by these situations of violence sometimes come to confide.

"Once a boy went to speak with the actor and explained that he identified with Edu, that he was starting to be violent with his girlfriend. He was crying and told us that he needed help and that he did not want to reproduce what he had seen at home", says Susana Martin Cuezva, explaining that her case had been reported to the competent services.

At the end of the show, Patricia Garcia explains that she learned that you had to respect yourself and know how to set limits.

"If a relationship starts to take an aggressive turn, you have to leave. For your physical and mental health," she concludes.