On this day, October 5, 2018, the team of the migrant aid association is preparing a big event: the next day must be held a national demonstration to support the rescue actions at sea that it carries out with its ship. 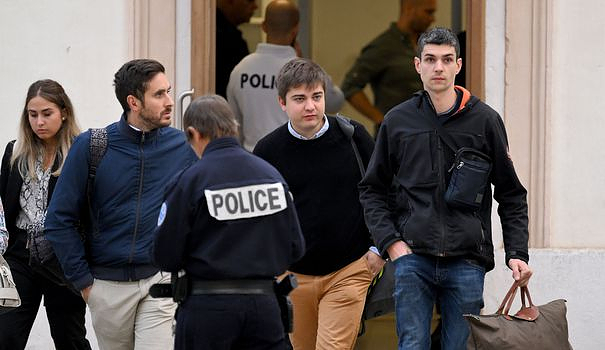 On this day, October 5, 2018, the team of the migrant aid association is preparing a big event: the next day must be held a national demonstration to support the rescue actions at sea that it carries out with its ship. , the Aquarius, blocked in Marseille for administrative reasons.

Suddenly, activists from Génération Identitaire - a far-right group dissolved in March 2021 - invade the apartment that serves as the NGO's premises: seven employees are inside, including the director, Sophie Beau.

At the helm, Monday, on the first day of the trial of 23 activists (19 men and 4 women) from the far-right group of which only eleven are present, she says she was "very, very scared" when she saw 22 young people to rush, like "a horde" which "screamed", in the narrow corridor of the association's headquarters.

The director, accustomed to very violent situations during her humanitarian missions, "notably an armed robbery in Sierra Leone", is "totally shocked", in particular when she notices that one of her colleagues, the only man present on the association's side that day, trying to intervene: "I thought it was an attack, that my colleague was going to die".

"It was the first time that I felt targeted as a humanitarian", insists Sophie Beau. If she remembers having been violently ejected from the apartment, down the stairs, the director of the NGO has "a moment of amnesia": she has completely forgotten having been "pressed against a wall", which she reported his colleagues.

"I even forgot, at the time, who was in the office that day, I had to look in my diary", she continues, to show the extent of the trauma suffered.

- "Projected on the wardrobe" -

Another employee finds herself in the presence of about fifteen activists, in her office, whom she refuses to leave, not understanding "who they were or what they wanted".

The youngest of the identity activists, Flora Salacroup, 18 at the time of the events, "pushed the door very violently and threw me on the cupboard", explained this employee on Monday, describing a group "very organized, with some who yelled at me and others who tried to reassure me".

For fear of reprisals, the young woman prefers to be quoted anonymously.

At one point, two women from the Génération Identitaire "commando", including Mrs. Salacroup, pull her by the arm to make her fall from her chair: for several months her shoulder will remain painful.

At the helm, this victim also revealed that she was pregnant at the time of the events: "I lost this child two weeks later", she says, in tears: "Of course we can never prove that it is due to the attack, but for me, all my life, it will be linked to this event”, she continues.

"We didn't traumatize anyone," said Flora Salacroup, law student, activist successively with the Republicans and the National Rally before joining Generation Identity in 2018.

Defending a "pacifist action", the young woman maintained, like the other defendants called to the bar on Monday, that the sole purpose of the operation was "to send a political message": "SOS Méditerranée, I still think so today today, traffics in human beings".

A certainty for Sophie Beau: this action of Génération identitaire has "released violent speech", especially on social networks, and contributed to the harassment of which the association is now the victim.

"Before, it was a source of pride for me to work for SOS, since then I no longer dare to tell people what I am doing", slipped his colleague, lamenting a "permanent feeling of hypervigilance".

SOS Méditerranée, an NGO based in Marseille, still rescues, now via its ship Ocean Viking, migrants trying to reach Europe on makeshift boats in the central Mediterranean, the deadliest migratory route in the world.

The trial is to be held until October 19.