SOS Méditerranée asks for help from France, Spain and Greece to disembark 234 people

The sea rescue NGO fears "a strong wind, high waves and a drop in temperature by the end of the week", adding in a press release published Thursday that "provisions are starting to run out" on board. 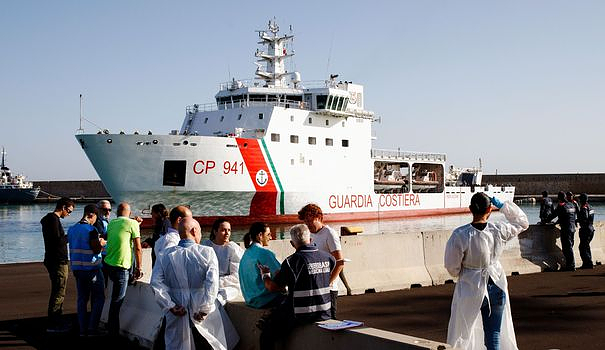 The sea rescue NGO fears "a strong wind, high waves and a drop in temperature by the end of the week", adding in a press release published Thursday that "provisions are starting to run out" on board.

Since its first rescue on October 22, SOS Méditerranée has requested, as usual and in accordance with maritime law, the authorities of the search area, in Libya and Malta, without obtaining a response, the director told AFP. and co-founder of the NGO, Sophie Beau, by phone Thursday.

She then approached Italy, but the recent change of government in Rome, and the anti-migrant declarations of its leaders, leave little hope of obtaining a green light.

"The Minister of the Interior targeted the Ocean Viking in his statements", recalls Sophie Beau. Matteo Piantedosi has indeed announced that he has issued a directive warning the police forces and the port authorities that his ministry is considering a ban on entry into the territorial waters of the ship chartered by SOS Méditerranée and the German boat of the NGO SOS Humanity.

On Thursday, the two ships had not received any official communication on such a decision, but "they are nevertheless faced with a total blockage on the high seas and an implicit ban on entering Italian ports", detailed SOS Méditerranée.

The NGO then turned to the maritime authorities of France, Spain and Greece, "which are best able to provide assistance, to facilitate the designation of a safe port".

“This is the first time that we have asked them,” explained Ms. Beau, who specifies that the request was made on Wednesday evening. Thursday at midday, SOS Méditerranée had received no response.

The director insisted: "We are not asking France to open a port for us, but to help us find a solution", in priority in Italy or Malta, the states closest to the Viking Ocean, currently in southern Sicily.

Since the beginning of the year, 1,765 migrants have disappeared in the Mediterranean, including 1,287 in the central Mediterranean, the most dangerous migratory route in the world, according to the International Organization for Migration (IOM).