Somalia is on the brink of famine, warns the UN in a "final warning"

"Famine is knocking at the door. 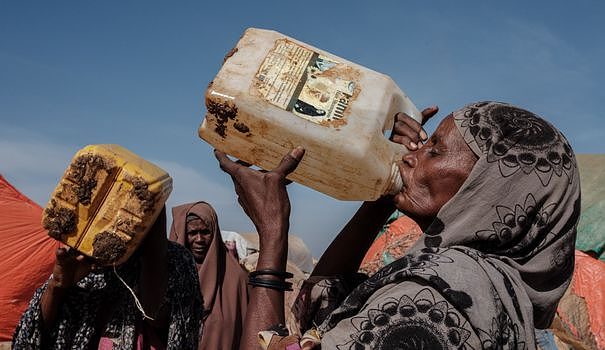 "Famine is knocking at the door. Today is a final warning," Martin Griffiths, head of the UN's Office for the Coordination of Humanitarian Affairs (Ocha), told a press conference from the capital. Somali Mogadishu.

He stressed that the latest data "show concrete indications that a famine will occur (...) between October and December this year", in two districts in the south of the country, those of Baidoa and Buurhakaba.

Arriving in Somalia on Thursday, Mr Griffiths said he was 'deeply shocked by the level of pain and suffering that so many Somalis are enduring', saying he had seen 'children so malnourished they could barely speak' during his visit in Baidoa, "epicenter" of the impending disaster.

Across the country, a total of 7.8 million people, nearly half of the population, are affected by the historic drought, of which 213,000 are in serious danger of starvation, according to UN figures.

Hunger and thirst have thrown a million people onto the roads since 2021.

The country is experiencing its third drought in a decade, but the current one "exceeded the horrific droughts of 2010-2011 and 2016-2017 in terms of duration and severity", Ocha estimated in July.

This drought is the result of an unprecedented sequence for at least 40 years of four insufficient rainy seasons in a row since the end of 2020.

The World Meteorological Organization (WMO), the UN weather agency, warned at the end of August of the high probability that the next season, scheduled for October and November, will also fail.

The drought decimated herds, essential to the survival of a largely pastoral population, as well as crops, which had already been ravaged by an invasion of locusts that crossed the Horn of Africa between late 2019 and 2021.

The consequences of the coronavirus pandemic (confinement, slow trade, etc.) have made the lives of many Somalis even more precarious.

And in recent months, Russia's invasion of Ukraine has had a dramatic impact on Somalia, whose wheat supply was 90% based on these two countries.

The prices of certain commodities have exploded. "In parts of Somalia, prices of staple foods, such as red sorghum, have risen above levels seen during the 2011 famine," said an OCHA report released in July.

"People's means of producing food and earning an income are stretched beyond breaking point and large-scale intervention is urgently needed to save lives... and avert starvation" , said the Food and Agriculture Organization of the United Nations (FAO).

Somalia was hit in 2011-2012 by a famine that killed around 260,000 people, half of whom were children under the age of five. Famine was declared in several areas in the south and center of the country between July 2011 and February 2012.

In 2017, a new disaster was averted thanks to the early mobilization of the international community.

But this year, faced with the multiplicity of humanitarian emergencies (Yemen, Afghanistan, Ukraine...), the many appeals launched by humanitarian NGOs and UN agencies to avoid a tragedy - not only in Somalia, but in the throughout the Horn of Africa (Ethiopia, Kenya) - received little attention.

At the end of June, the NGO Save The Children had warned the international community that it was advancing "like a sleepwalker towards a catastrophic famine" in Somalia.