"Solidarity", minister and colleagues pay tribute to the tax officer killed on Monday 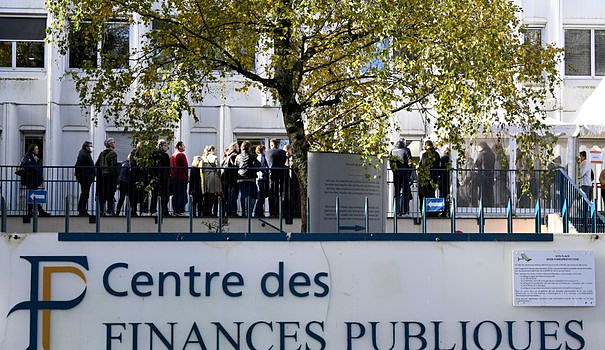 At 12 p.m. sharp, the Minister of Public Accounts Gabriel Attal, the director of the Public Finance Department (DGFiP) Jérôme Fournel and several members of the ministerial cabinets of Bercy lined up in silence in front of a portrait of the killed agent.

Despite the rain, dozens of agents from the Ministry of Economy and Finance were also present in the main courtyard of Bercy to pay tribute to their colleague.

In Rennes, around fifty tax officers gathered in the inner courtyard of the administrative city, noted an AFP videographer.

"Vis-à-vis the colleagues who are exposed, then vis-à-vis the relatives of our deceased colleagues, it shows that there is a community", explained Christophe Kerguelen, head of the personal tax department of Rennes. .

In the morning, Gabriel Attal had received the four representative unions of public finance at the ministry.

The exchanges lasted more than an hour and the minister "was rather attentive", commented to AFP Olivier Villebois for the CGT Public Finances.

Working groups will be set up to work on the safety of officers during tax audits, he added.

The unions have asked the minister to "speak a strong public voice" against "civil servant bashing" and to strengthen consent to tax, adds Anne Guyot-Welke (Solidaires Finances publiques).

“We had confirmation of extensive psychological support” for the agents of the center on which the killed agent depended, and of the reactivation of a national listening cell set up during the Covid-19 pandemic, was - she congratulated.

A climate of consensus that contrasts with the horror caused Monday evening by the death of the tax official.

The latter had gone Monday around 2:00 p.m. to the home of the 46-year-old second-hand dealer, in the company of an inspector "to carry out an audit of the accounts".

The junk dealer then kidnapped the two agents before killing the inspector and then shooting himself, said Arras prosecutor Sylvain Barbier Sainte Marie on Tuesday. The victim, a 43-year-old senior public finance inspector, died of "several stab wounds to the back and chest".

Her colleague, 39, is in severe psychological shock. She was taken care of by the emergency services, before being auditioned.

The investigation is open of the counts of sequestration and assassination. The Arras prosecutor believes that the act could have been premeditated, the links used to attach the victim and his colleague, including clamps, having "probably been bought before the facts", knowing that an appointment had been set for control.

"By dint of criticizing taxes, those who come to get them (...) those who want equal treatment before taxes, inevitably they suffer", was annoyed Wednesday the secretary general of the CGT Philippe Martinez during a trip to Bobigny (Seine-Saint-Denis).

All the public finance unions have decided to suspend their national campaign communication in the context of the professional elections (from December 1 to 8) until Friday.

The National Assembly observed on Tuesday a minute of silence in memory of the victim, described by his colleagues as a "reassuring, united figure, a real team leader", according to Mr. Attal.