“Societal peace that has been achieved with difficulty is willfully endangered” 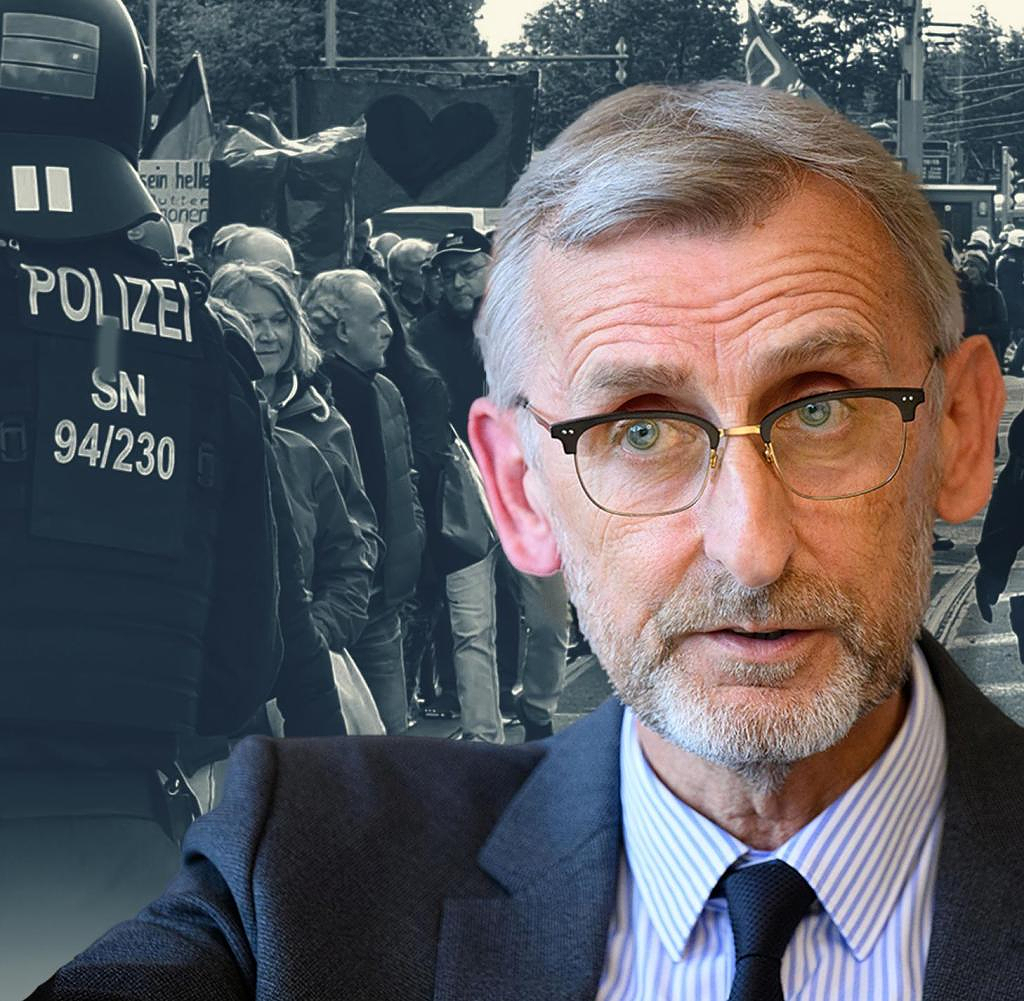 WORLD: Mr. Schuster, in Saxony, thousands have been demonstrating on Mondays for months against the federal government, the energy crisis, for Russia. Is something slipping here?

Armin Schuster: That worried me at first in the summer. We had a very high meeting intensity in Saxony, but are now noticing a significant decrease in the number of participants. Although there are still around 90 meetings every Monday, only around 15,000 people come instead of 35,000. So we don't have a rage autumn.

There are many topics that overlap: the war in Ukraine, the energy crisis, migration, Corona - and everything else that is on people's hearts. The number of people on the street seems to correlate strongly with the quality of federal and state crisis management. Many are simply afraid of their existence and are on the streets.

WORLD: If you ask them, many demonstrators have no problem with the appearances of right-wing extremists. Does that worry you?

Schuster: The plan of these extremists is to be able to connect with the bourgeois milieu. It is the task of our society that this plan fails. Legally, this is often difficult to prevent. It is not punishable if a right-wing extremist Freier Sachse speaks there, as long as the often borderline rhetoric is still within the legal range. A political attitude is not yet a legal finding. What I personally find disgusting does not have to be criminally relevant. We move in this field of tension.

WORLD: This is how you classify the small party Freie Sachsen. They lead the protests. How strong do you think they are?

Schuster: Above all, they are loud on the internet and weak on the street. What they don't bring to the streets themselves with their own gatherings, they try to compensate for with a kind of optical illusion at large gatherings: flags are cleverly positioned and the demos are dramaturgically influenced as if they were the leading figures themselves.

This also makes it difficult for the assembly authorities: Can something be banned or not? Our goal is to make life as difficult as possible for right-wing extremists.

Schuster: On Saturday in Leipzig, for example, the pictures of politicians as convicts behind bars should be shown. We were of course prepared for this, as they were already being used in Thuringia. This allowed the police to collect the items immediately. Saxony has long since changed course.

The police and the Office for the Protection of the Constitution are not just social repair shops, we want to act more preventively, i.e. before the situation arises: zero space for right-wing extremists and man cover whenever it suits. For example, we will establish a permanent network of experts, which we have only used on a case-by-case basis so far.

WORLD: When has it been used so far?

Schuster: In Heidenau, a "show trial" was to be carried out by the Free Saxons against Robert Habeck. Then a flyer is said to have appeared where Habeck was tied up in a trunk. Experts and lawyers, the police, the Office for the Protection of the Constitution, the public prosecutor's office and the assembly authority then got together to ask: Can we ban this without any problems under the rule of law? After all, something like that has to hold up in court. In the end, the ban stood up in two courts.

WORLD: Thuringia used to have it...

Schuster: ... that's why we decided on a transnational "Security Cooperation East". We have to get rid of this image problem because otherwise we have no chance of attracting people to this location. Saxony has a successful tradition, top companies are based here, it is a top location for research and universities. As long as we present this image, we will not be able to attract enough high school graduates, students, engineers, scientists and tourists.

WORLD: The number of refugees is increasing, some municipalities are sounding the alarm. How does Saxony deal with it?

Schuster: The pressure is very high. Cities such as Leipzig, Dresden or Chemnitz are at the limit when it comes to accommodation and the other communities are about to reach it. That worries me. In addition to the approximately 58,000 Ukrainians that we have taken in, we are again seeing an increasing number of refugees from Syria and Afghanistan. We face great practical problems.

In view of the ongoing war in Ukraine, the destroyed local infrastructure and falling temperatures, German municipalities and municipalities are expecting the number of refugees to increase. The City Day is therefore now demanding more support from the federal and state governments.

WORLD: Do you have to provide collective accommodation in gyms again, as in autumn and winter 2015/16?

Schuster: We want to avoid that as much as possible. The numbers are as high now as they were then. But we learned a lot from that crisis. In this way, we were able to offer apartments to many Ukrainians in a short space of time. And the search for new accommodation options continues.

Schuster: We are running a project group with our state directorate and are expanding our state capacities. There is close and unbureaucratic cooperation in the Saxon districts and communities. The managing directors of the housing companies reported vacancies and said to the mayors, for example: We have 30 apartments here. But there are no kitchens in there. Then kitchens were bought and installed. That was lightning fast. The Saxons are very practical.

WORLD: Right-wing extremists are already trying to heat up the mood. Do you anticipate conflict?

Schuster: In the meantime, there are no more vacancies, especially in the big cities. I would like to avoid having to hog gyms again. That would lead to conflict. In the pandemic, people had to do without a lot, especially in sports. We can't take that away from them again. Then I would rather set up winterproof tents and use containers. We do what we can. However, overall development cannot continue unabated.

Schuster: It goes without saying that we have to help the Ukrainians and that is my top priority. The murderous war is only a day's drive from Dresden. In addition to the bombs, there is now also cold weather and a power failure. That's why we have to be prepared for the fact that even more people will come to us in the coming months.

At the same time, however, we have an unchecked influx of asylum seekers who are not Ukrainians and whose right to stay is in question. When it comes to asylum procedures, we sometimes have very high rejection rates, depending on the country. However, the corresponding repatriations occur only rarely or not at all.

WORLD: What do you expect from the federal government?

Schuster: The traffic light policy is going in the wrong direction. Voluntary admission programs are running, for example from Afghanistan, the right of residence for those who are obliged to leave the country is being further simplified, the hurdles for immigration are further lowered and a repatriation offensive is being refused. I think that's absolutely wrong in this situation.

A laboriously achieved social peace is wantonly endangered. The district administrators and mayors are already telling me: we can't do it anymore. And Berlin is pursuing a policy of being ignored.

WORLD: What do you suggest?

Schuster: I'm from southern Baden, so Europe is in my blood. As a federal police officer, I helped build up Schengen and am completely convinced of it. That's why I'm not a fan of barriers, I preferred to dismantle them and rely on intelligent border surveillance. But the state still has to control and regulate immigration. But that just doesn't work.

Around 2,000 Tunisians, Moroccans, Algerians and Georgians who are required to leave the country live in Saxony. They don't have the right to stay, but we can't deport them. I think it is urgent to finally declare the Maghreb countries and Georgia safe countries of origin and to start again in the Bundesrat. But the government doesn't dare to do that. Although the Germans like to fly to Tunisia on vacation, they are not returned there. That's absurd.

WORLD: What would have to happen?

Schuster: We have an EU refugee agreement with Turkey that is actually no longer being observed. Serbia is happily issuing visas, and diplomatic pressure would be appropriate there too. But that doesn't happen either. There is unchecked immigration to Germany via the Balkan route and the central Mediterranean route via Switzerland. This waving through of the Schengen partners must end.

Two points are very clear: In this situation, people fleeing Ukraine have absolute priority. If the federal government does not foreseeably slowing down other access to asylum, we demand regular border controls for Saxony.

‹ ›
Keywords:
AfghanistanUkraineGrüneCDUApple PodcastTexttospeechRusslandPolizeiKrimiMalzahnClausChristianFlüchtlingeDresdenBundesratLeipzigThüringenRechtsextremismusAsylsuchendeMigrationspolitikArmin SchusterDemonstrationenCulinaKevinFreie SachsenArminSchusterOstritzRechtsextreme
Your comment has been forwarded to the administrator for approval.×
Warning! Will constitute a criminal offense, illegal, threatening, offensive, insulting and swearing, derogatory, defamatory, vulgar, pornographic, indecent, personality rights, damaging or similar nature in the nature of all kinds of financial content, legal, criminal and administrative responsibility for the content of the sender member / members are belong.
Related News