SNCF orders TGVs from Alstom, to go further in Europe

The contract for an amount of nearly 590 million euros, announced by the railway manufacturer on Thursday, relates to quadricurrent TGVs which, points out Alstom, "corresponds to the needs of European traffic". 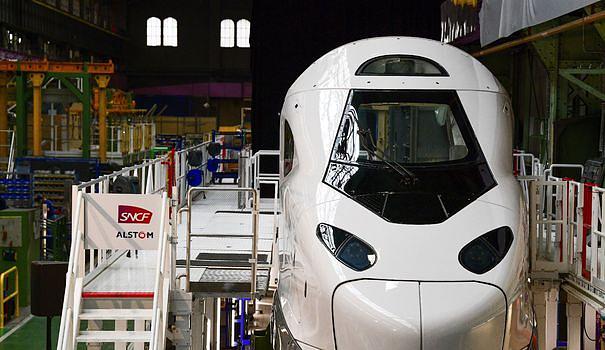 The contract for an amount of nearly 590 million euros, announced by the railway manufacturer on Thursday, relates to quadricurrent TGVs which, points out Alstom, "corresponds to the needs of European traffic".

These new trains will indeed be able to circulate under the different tensions of the rail networks in France and in the neighboring countries, allowing for example to rally Paris to Berlin or to venture into Italy. Provided that their engines can read the different signals.

"We have planned for this TGV to go anywhere in Europe," said Christophe Fanichet, CEO of SNCF Voyageurs, last year.

The company confirmed the order to AFP, taken according to it "in anticipation of customer demand which is higher than initial forecasts".

"It is a decision that accompanies the desire of Jean-Pierre Farandou (the CEO of SNCF) to double the share of rail in passenger transport for the 2030s, in order to achieve the necessary climate transition", specified a spokesperson.

The contract completes an initial order for 100 trains for the French market, placed in 2018 for 2.7 billion euros, as part of an "innovation partnership" concluded in 2016 between SNCF and Alstom to design the " TGV of the future".

This has since been called "TGV M" by the railway company and "Avelia Horizon" by the manufacturer. It costs 20% less than the previous generation, indicate the two parties.

The deployment of "TGV M" will be spread over ten years, from 2024, according to SNCF Voyageurs. The delivery date of the 15 additional trains has not been specified.

"This solution meets the technological, economic and competitive challenges of SNCF, in an environment of strong passenger demand for low-carbon mobility solutions", commented Jean-Baptiste Eyméoud, President of Alstom France, quoted in the press release. .

"More capacity, more ecological and more comfortable, TGV M meets the expectations of customers who are more and more numerous to choose the train as a mode of transport", added SNCF Voyageurs.

In fact, the 360 ​​TGVs currently in service are struggling to meet demand this summer, the spectacular rebound in attendance having quickly made people forget the trains running empty during the pandemic. The SNCF has even been accused of having reformed its old trains too quickly or of having shipped too many to Spain, where it launched its low-cost Ouigo service last year.

Fourth generation of French-style high-speed trains in 40 years - the first was put into service in 1981 - the "TGV M" should allow the transport of 20% more passengers than the current equipment. It will be able to accommodate 740 people per train in maximum configuration.

Major novelty, modularity: we can add or remove cars to have more or less long trains, according to needs. SNCF Voyageurs can also change the configuration of the seats to transform a car from first to second, and vice versa

This new train must consume 20% less energy than its predecessors thanks to more efficient aerodynamics and motorization. Its designers display 37% fewer CO2 emissions and 97% recyclable materials.

Alstom also promises 30% savings on maintenance thanks in particular to sensors that will allow parts to be changed at the right time.

Its train is assembled in La Rochelle, ten of the manufacturer's sites being associated with the project, including Belfort for the manufacture of the power cars, Ornans (Doubs) for the engines, Tarbes for the traction chain, Le Creusot (Saône-et-Loire) for bogies and Villeurbanne (Lyon metropolis) for on-board computer systems.