SNCF controllers on strike all weekend, 60% of TGVs canceled

The controllers - also called train managers at the SNCF - decided to stop work for the whole weekend to demand better recognition of their status. 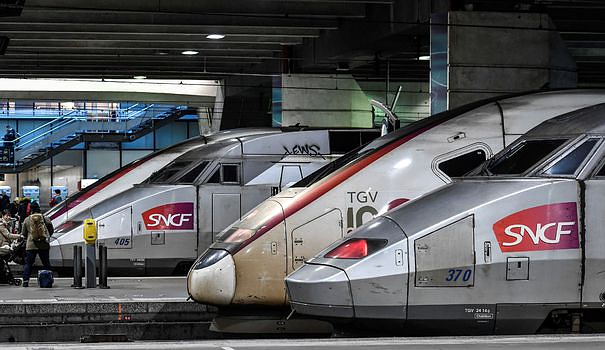 The controllers - also called train managers at the SNCF - decided to stop work for the whole weekend to demand better recognition of their status.

"In total, more than 80% of us are on strike and more than 90% on the TGV, it's unheard of," assured AFP Nicolas Limon, member of the National Collective ASCT (CNA), launched in September on Facebook outside of any trade union framework and which today has nearly 3,000 members.

The almost 10,000 train supervisors of the SNCF, of which nearly 3,000 work on the TGV and Intercités, have an essential function in terms of traffic and passenger safety. Without them, trains cannot run.

The weekend therefore promises to be extremely disrupted and a "gradual recovery" is envisaged on Monday, with 3 out of 4 trains on all TGV axes. The Atlantic axis is particularly affected, with only 1 out of 4 TGVs, as for the Ouigos.

"The management has not taken the measure of the discontent", assured AFP Rénald Szpitalnik, elected SUD-Rail and controller in the TGV Paris-Milan.

The collective was received twice by the management, but without concrete progress, before carrying out its strike threat.

"It's a strike that we didn't see coming, neither us nor the unions," SNCF CEO Jean-Pierre Farandou admitted Thursday during a conference organized by the magazine Challenges. "We were a little surprised by this move," he admitted.

"We are not considered to be rolling staff when we work three weekends a month and do not sleep at home ten evenings in the month", explains Nicolas Limon.

With the CNA, he calls for the integration of various bonuses to the base salary so that they are taken into account in the calculation of the pension.

These bonuses are indexed to activity and are therefore not paid in the event of sick leave or during holidays, also denounces the railway worker, who is one of the six controllers at the origin of the creation of the collective.

The management of SNCF Voyageurs says it has proposed "an increase in the work bonus of 600 euros per year for all on-board managers", a "partial" integration of this "in the fixed salary in 2024", "acceleration the progression of remuneration" and "the transition to two skippers per train for all TGV Inoui within three years".

Proposals that did not calm the mobilization. "We are not revolutionaries, but we need something concrete," assures Nicolas Limon.

The collective has filed a strike notice for the Christmas and New Year weekends in order to put pressure on the SNCF but "we will do our best to ensure that there is no strike at Christmas", promised Mr. Silt.

This mobilization comes on the eve of the start of the mandatory annual negotiations (NAO), which must begin next Wednesday at the level of the SNCF group. The CGT, SUD-Rail and CFDT called for a "unitary strike" that day.

After this date, negotiations between captains and management should resume and "between December 8 and 22, we will have 15 days to restart a dialogue" and reach an agreement, said Nicolas Limon hoped.

Jean-Pierre Farandou said for his part that he hoped to be able to "find a balance between (...) ticket prices on the one hand, an increase in railway workers on the other, having the resources to innovate and to invest...."