Sliding, racing, cruising - a test drive on the "Norwegian Prima"

Somewhere on the Atlantic Ocean between New York City and Halifax, in a sky-blue capsule, John stands in a felt sack and crosses his arms across his chest. 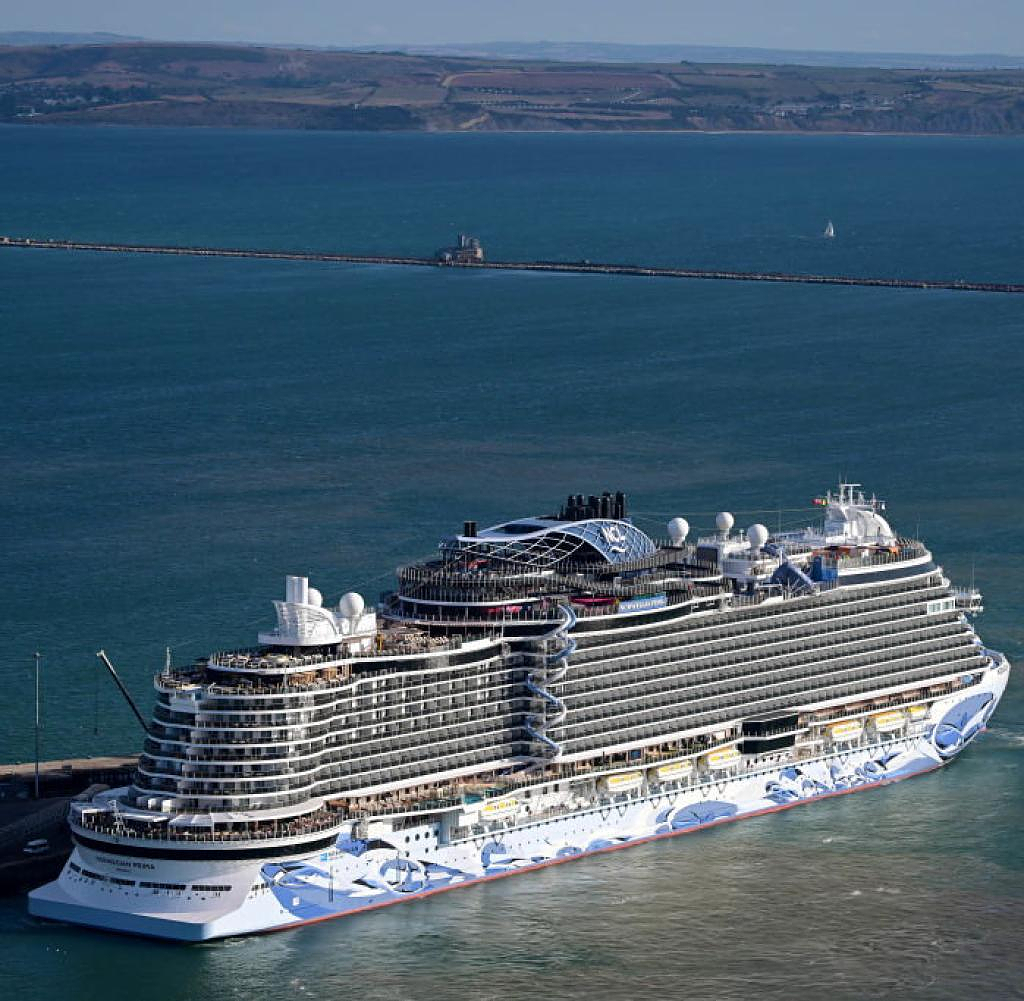 Somewhere on the Atlantic Ocean between New York City and Halifax, in a sky-blue capsule, John stands in a felt sack and crosses his arms across his chest. Just before the capsule hatch closes on him, he smiles nervously and gives a thumbs-up. "Three, two, one", a computer voice that sounds like Darth Vader begins the countdown. Then it slips and John is gone.

"The Drop" is the name of the freefall dry slide in which John is just blasting down ten missiles on board the cruise ship "Norwegian Prima" before being spat out again seconds later on deck eight. His wife is already waiting there with her smartphone camera running.

However, the best view of the fun was had by a passenger whose cabin balcony is located exactly where the tube is transparent for a few meters. To ensure that the slide ends safely, the slides are slowed down briefly on the middle section, so that John in his felt sack and the holidaymaker in a bathrobe could smile at each other, as he says.

The newest ship of the American shipping company Norwegian Cruise Line, put into service in August 2022, is a floating amusement park. While the “Prima” glides across the world’s oceans, the passengers can race in pairs in a kind of helix spiral, let themselves be washed down the track by an artificial tidal wave or whiz down a 420-metre-long go-kart track.

Everyone on board is on first-name terms. Cheerful exuberance with a bit of thrill and comfort - this recipe is intended to open up new, younger groups of customers. By waking up the kid in the Crusader.

While there are shorter go-kart tracks and water slides on other ships, the new concept is aimed at the play instinct of a more adult audience - none of the slides here are suitable for children under eight years of age, there is no special children's pool or water slide for toddlers. The Kids Aquapark on the "Prima" is more of a water sculpture than a playground and is positioned off the beaten track.

The new ship is best suited to teenagers with hefty pocket money and adults who don't mind paying a few dollars extra for each attraction, because go-karts, interactive mini-golf "Tee Time" and darts cost between ten and $40 extra per round . The same applies to the gigantic Galaxy Pavilion, a virtual adventure playground with a flight and racing simulator, for playing golf or shooting zombies with two escape rooms. The slides, after all, are free.

The cruise industry has learned a few lessons from the pandemic, and for the “Prima” they mean: more decentralized offers, more fresh air. You can play darts in "The Stadium", a spacious, covered facility with a design that alternates between the TV series "Miami Vice" (palm trees, flamingos, neon lights) and the "Sopranos" (Chesterfield sofas, dark wood panelling). , pickleball, beer pong, shuffleboard and foosball.

Many of the restaurants have outdoor seating, and on deck eight, an ocean boulevard wraps around the ship. There is so much to do on board that it almost doesn't matter where the ship is sailing - vacationers don't really need to leave it anymore if they are looking for entertainment.

Younger crusaders should be lured on board with the opportunity to work remotely, i.e. without a permanent office on the go. Alex, a single mid-40s from Manhattan, is one of them. He has moved his home office to the “Prima” for the duration of the cruise. He has booked a Wi-Fi package (from $25 per day) and is now hoping that the Zoom conference calls will work. And that works? "At least temporarily."

Internet connections at sea are via satellite, which is expensive and rather unreliable. That's why you see more people with books on cruise ships than with laptops in front of their noses. Yet. Because in June, the responsible US authority approved that Starlink, the Internet access via satellite network of SpaceX entrepreneur Elon Musk, can also be obtained from vehicles, airplanes and ships. The difference to the classic satellite system is that Starlink is made up of thousands of small satellites instead of just a few large ones. This ensures a more reliable and faster network.

The world's largest cruise company, Royal Caribbean Group, is in the process of equipping its entire fleet with the system. Norwegian Cruise Line is also currently testing Starlink, at least that's what CEO Harry Sommer indicated at an industry conference in November. The cruise company did not want to officially confirm this when asked. But one thing is clear: if the Internet on board becomes more reliable and cheaper, a ship like the "Norwegian Prima" would be ideally suited for a new, younger and internet-savvy target group.

First surfing, then rushing: For Alex, this is exactly the right mix, even if the two-meter giant had to bite back the go-karts. He weighs two kilos too much, more than 120 are not allowed for the 50 km/h fast car on the 420-meter track, which has 14 narrow curves over three floors.

Alex washes off his frustration in the whirlpool. Apart from the experience at the racetrack, however, he has surprisingly few problems with his body dimensions. The cabin is unusually spacious and even the bed is long enough. Alex is most impressed by the spa, which features a charcoal sauna, another first at sea.

3000 passengers and 1500 crew members fit on the "Norwegian Prima". The open but nested architecture of the ship cleverly avoids excessively large crowds. Instead of one large pool, there are several smaller pools spread across the ship. The central atrium extends over three levels, on which bars, cafes, lounge corners and guest service centers are located.

Even the theater, which turns into a disco at night, is rather small for a cruise ship of this category, with 700 seats. The restaurant options are numerous, the dining rooms glamorous - lots of gold and eccentric chandeliers. In the French restaurant "Le Bistro" they almost reach the floor.

John and his wife are ready for a lunch break. The two are passionate crusaders, they like the new attractions that the "Prima" offers. The couple settle into the thick black-and-white striped cushion of the sun loungers and order frozen margaritas.

They put their menu together using a touchscreen built into the table, and it is brought from one of the eleven food stands in the airy market hall. John orders guacamole with nacho chips and Indian chicken korma, his wife orders Thai noodles and a Caesar salad. At the next table, a seven-year-old eats a gigantic sundae while his grandmother picks ham from an appetizingly prepared tapas plate.

The aforementioned Ocean Boulevard is ideal for a digestive walk. Here on deck eight you can stroll past shallow pools, expansive sun beds, elegant beach bars and two pools. With a bit of luck you can watch whales or dolphins out in the sea from the edge of the pool.

Incidentally, without being disturbed by the engine noise of the kart track. Although the cars are equipped with a noiseless electric motor, a roaring engine is played back from the soundtrack for that authentic Formula 1 feeling. For the delight of the drivers, for the chagrin of the sunbathers, the Vibe Beach Club is located on deck 17 just below the speedway.

For those who want to hide the hustle and bustle, the Observation Lounge on Deck 17 is the place to be. The high, slightly inclined window front, which stretches around the entire bow of the ship on this deck, offers an unobstructed view of the water. Lying sprawled on one of the chaise longues here feels like swimming on the waves, which might explain why the lounge is full of people napping at almost any time of the day.

However, John has no time for a nap after dinner. He wants to try everything the ship has to offer. In the end, however, “The Drop” remains his favorite, he says, not least because the mega slide is free. When asked if it isn't silly to rush through a plastic pipe as an adult, John shakes his head in disbelief. He thinks that only someone who doesn't trust themselves can ask a question like that. And gets in line again at the top.

The Norwegian Prima will be sailing Northern Europe from June and the Mediterranean in October before crossing over from Barcelona to New York for Caribbean winter cruises in November. The identically constructed "Norwegian Viva" (also with a three-storey go-kart track on board) will be christened in the summer of 2023 and will then sail in the eastern Mediterranean. Four more ships in the new Prima category are to follow in the next five years (ncl.com/de/de/).

Other cruise companies also have floating playgrounds. Carnival Cruises is known for its water slides and offers “Bolt”, the first roller coaster on board a ship (carnivalcruiseline.de). MSC has a bowling alley on board (msccruises.de) and Royal Carribean, for example, has an ice rink and carousel (royalcaribbean.com/deu/de).

Participation in the voyage was supported by Norwegian Cruise Line. You can find our standards of transparency and journalistic independence at axelspringer.com/de/Werte/downloads.

‹ ›
Keywords:
KreuzfahrtenKreuzfahrtschiffeVergnügungsparks
Your comment has been forwarded to the administrator for approval.×
Warning! Will constitute a criminal offense, illegal, threatening, offensive, insulting and swearing, derogatory, defamatory, vulgar, pornographic, indecent, personality rights, damaging or similar nature in the nature of all kinds of financial content, legal, criminal and administrative responsibility for the content of the sender member / members are belong.
Related News