"There are a lot of tears, a lot of blood. 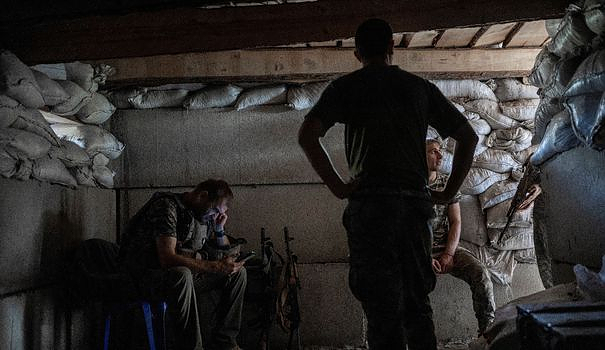 "There are a lot of tears, a lot of blood. You cry in your heart," adds the 40-year-old man, a dental technician in civilian life.

"The history of several generations is being destroyed".

In a complex of underground bunkers, surrounded by rusting anti-tank obstacles and filled with stray cats and dogs, his comrades pour themselves hearty bowls of hot soup.

"Six months of war is not only a big pain for the country, it's also a little pain for everyone personally," said Mykola, a 41-year-old soldier seated to his left.

The deputy commander of the battalion, Artem, 30, does not hide it: "We informed our soldiers that the conflict could drag on for years".

Russia launched its attack on Ukraine on February 24, attempting to capture the capital kyiv in a lightning offensive.

But Ukrainian forces put up fierce resistance, forcing Russian troops to retreat and shifting the fighting to the eastern Donbass basin and its agricultural south.

Ukraine, for a few weeks, announces a counter-offensive in the south, delayed, according to kyiv, by the slowness of Western arms deliveries.

Asked about his hopes for the future during a visit to Odessa (southern Ukraine) on Friday, UN Secretary General Antonio Guterres closed his eyes, slowed his words, and spoke of a "very difficult situation, where prospects for peace are not obvious".

In Mykolaiv, an important regional center which had almost half a million inhabitants before the Russian offensive, the war seems to be nothing new.

Troop support posters were sodden by winter, torn by spring winds and bleached by summer heat.

The seams of the sandbags piled around the dams begin to tear, and wild grass grows in the gaps.

In the first weeks of the war, a Russian missile fell on the seat of the regional government, killing 37 people.

The gaping hole still visible is now one of the many scars of this port city, which remains the target of relentless bombardment.

Last week Petro-Moguyla Black Sea State University was hit twice. The main entrance was blown away, the ceiling panels demolished and the windows shattered into pieces.

The collapse of the facade reveals the interior of the classrooms.

"They are attacking schools, hospitals, the port and the city's infrastructure," said the rector, Leonid Klymenko, from a gutted study room.

"It is clear that they want to completely destroy Ukrainian education, destroy the Ukrainian spirit, destroy everything Ukrainian."

As the war enters its seventh month, few signs of progress are visible.

On Friday, Antonio Guterres visited the port of Odessa to observe the implementation of this agreement, which seems to be working.

But his travels were clouded by growing concerns around Ukraine's Zaporizhia nuclear power plant.

Located 200 km north-east of Mykolaiv, this power plant, the largest in Europe, has been occupied by Russian troops since the start of the war and regularly comes under bombardment raising fears of a major disaster.

"It will not be easy to find a path for peace in the short term, but we must persist, because peace is the most important good in the world", summarizes Mr. Guterres to AFP.