Cosentino's Silestone(r), stars in a new Madrid Fusion Alimentos de Espana edition, one of the most important gastronomic conventions in the world. 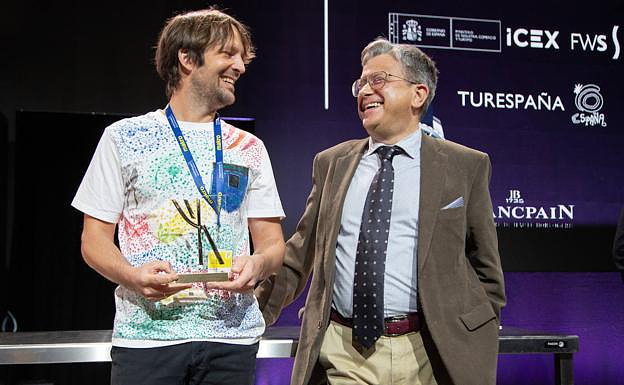 Cosentino's Silestone(r), stars in a new Madrid Fusion Alimentos de Espana edition, one of the most important gastronomic conventions in the world. The event celebrates its 20th anniversary by bringing together some of the most innovative chefs around the globe during these days in Madrid. There are also different promotions, contests, and prizes.

The Silestone(r), brand, has been responsible for presenting one of Congress' most anticipated awards, the "Chef Of The Year in Europe" award. This year, Rene Redzepi was awarded the prize. Redzepi is known as the father of new Nordic cuisine and has been head of Noma since 2003. The restaurant, which holds three Michelin stars and is regarded on many occasions as the best in the world, was recently relocated to the outskirts Copenhagen.

Santiago Alfonso (Vice President of Communication and Corporate Reputation at Cosentino), and Jose Carlos Capel (President of Madrid Fusion), presented the award to Redzepi. They thanked Redzepi for this honor and said that innovation in gastronomy was valued and, above everything, that a more sustainable kitchen is possible. The talk was preceded by the appearance of Andoni Luis Adurz, a Danish chef. Both have talked about creativity, play and progress, as well as their cooking backgrounds, environment, and the future of gastronomy under the title "Encounter of Thoughts".

Silestone(r), on the other hand, is making chefs and professionals fall for its design and features as they work hard in the professional kitchens at Madrid Fusion. The heart of the Congress' backstage area is where the most intense work takes place, with twenty countertops.

‹ ›
Keywords:
SilestoneProtagonistaAniversarioMadridFusionAlimentosEspaña
Your comment has been forwarded to the administrator for approval.×
Warning! Will constitute a criminal offense, illegal, threatening, offensive, insulting and swearing, derogatory, defamatory, vulgar, pornographic, indecent, personality rights, damaging or similar nature in the nature of all kinds of financial content, legal, criminal and administrative responsibility for the content of the sender member / members are belong.
Related News