"Seventeen fighters were killed in a Turkish airstrike that targeted a Syrian regime position (. 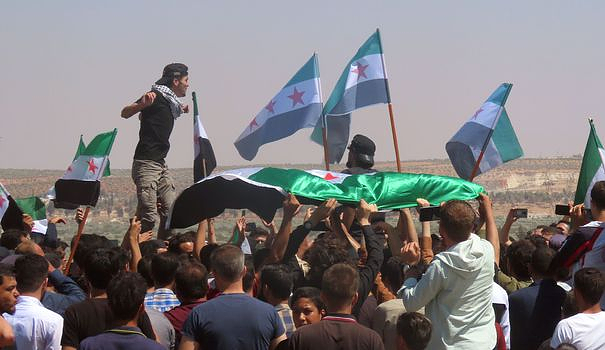 "Seventeen fighters were killed in a Turkish airstrike that targeted a Syrian regime position (...) near the Turkish border" in the village of Jarqali, west of the city of Kobane, reported the Syrian Observatory for Human Rights (OSDH).

"We don't know if they come from regime forces or if Kurdish fighters control the area," said OSDH director Rami Abdel Rahmane.

"Any attack on a position held by our armed forces will be met with a direct and immediate response on all fronts," SANA added.

Heavy fighting broke out overnight from Monday to Tuesday between the Syrian Democratic Forces (SDF), led by Kurdish forces, and the Turkish army, which intensified its bombardment after one of its positions on the Turkish side of the border was attacked, according to the OSDH.

Ankara claimed that the Kurdish attack in Turkish territory had cost the life of a soldier.

In retaliation, "13 terrorists were neutralized", according to the Turkish Defense Ministry, adding that the operation in the region was continuing.

The SDF said in a statement that "Turkish military aircraft" had carried out "12 airstrikes against Syrian army positions deployed on the border strip west of Kobane". The raids claimed "casualties", SDF spokesman Farhad Shami said, without providing further details.

According to the SDF, at least 13 of their fighters have been killed by Turkish attacks since July.

Kurdish forces control most of northeastern Syria, a country fragmented since the war started in 2011 and which has become more complex over the years with the intervention of multiple groups and foreign powers, such as Turkey.

The conflict has left around half a million dead and millions displaced and refugees.

Syrian regime forces have deployed in recent years in areas controlled by Kurdish forces near the border with Turkey, under agreements intended to stem cross-border Turkish offensives against Kurdish fighters, considered "terrorists by Ankara.

Turkey, which has launched a series of operations in Syria targeting Kurdish forces and the Islamic State jihadist group since 2016, has been threatening since May to carry out a major offensive against the Kurds in northeastern Syria.

Since the start of the war, Turkey, supporting the rebels, has fiercely opposed Syrian President Bashar al-Assad. But last week Turkish Foreign Minister Mevlut Cavusoglu called for reconciliation between the Syrian government and the opposition, which angered rebels and led to anti-Turkish protests.

Also on Tuesday, Cavusoglu said the Syrian insurgents and the regime in Damascus needed to "reconcile".