On Friday, the 26th Seron Ham and Sausages Fair opened with the National Ham Cutter Contest. 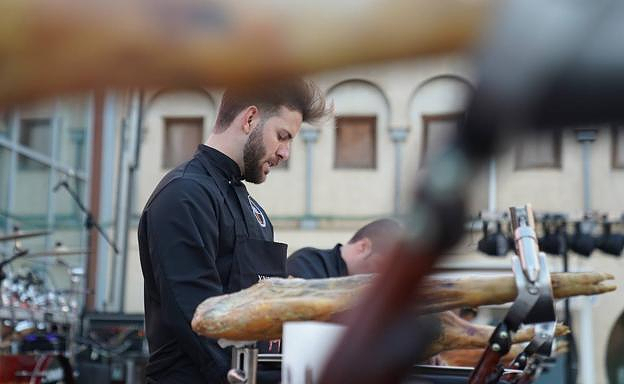 On Friday, the 26th Seron Ham and Sausages Fair opened with the National Ham Cutter Contest. The massive public attendance far exceeded the expectations of businessmen and city council officials. It was also reminiscent of previous editions of the covid-19 pandemic. Geovany Almanza, from the Canary Islands, was the new winner of the XII Edition of this contest. In addition to the cash prize of 300 euros, points are awarded for the Final of Spanish Championship. Jose Alcobendas won the second prize, while Vicente Garcia took home third place. Gines Rodrigo won the award for the best creative portion. Vicente Garcia's dish was the closest to 100g. He was served a 99-gram portion.

The contest's high standard attracts top cutters from all over the country. The official awards section was made more competitive by this announcement. From 10 p.m. to after 12 p.m., the judges evaluated skill, cleanliness, style, speed, and even speed of the cut. All six contestants were observed at all times by the jury. The jury evaluated the following aspects of a cutter: the profile of the pieces on each side, the style and pointing of cutters, the length and thickness of slices, effectiveness and efficiency of plating, artistic plates, and creativity of plates.

The evening was organized by the Seron City Council, the municipality's meat-business association. Institutional representatives were invited to join Juan Antonio Lorenzo, the mayor of Seron and Luis Segura, the president of the association. It was also a night to reunite after many years of the covid pandemic that made it impossible for the municipality experience such a traditional, but at the same time so crowded, activity like this Friday night.

The cut show was a joint event between Seron's businessmen and residents. This table was held prior to the tasting. This year's participating companies are Pena-Cruz Hams and Sausages and Los Remedios Sausages. This year, a new merchant, "Sabores de Seron", has been established in Valle del Almanzora. They make chips and have recently opened their doors.

The Seron Ham Fair, just like a well-dry leg, has improved over the years and added value, like the national cutters competition. It is not a coincidence that 26 editions of Seron Hams and Sausages have been held. The Protected Geographical Indication, (PGI), confirms the unique quality of the Seron dryers meat products and distinguishes the microclimatic conditions for their optimal development.

Since 1995, the Seron Ham and Sausage Fair has been a tradition. Seron residents and those from other municipalities are invited to join the festivities and enjoy a meal made with one of the most iconic products of Iberian cuisine. The event's tradition has made Seron one of Spain's capitals for ham, alongside other inexcusable points along the route of this pork product.

The city council of Seron and the organizing companies offered a taste of the product during the competition. This was in addition to the display at the court. The jury gave the prizes to the cutters at the end.

Today will be the last day of the weekend in Almeria's Plaza Nueva. It will include the XXVI Ham and Sausages Fair. Each company was able to offer a taste of their products. The tastings will end at midnight. However, an orchestra festival will be held in Plaza Nueva afterwards.

This great fair will feature tastings from a variety of companies that offer ham, sausages and cheese as well as wine, honey, snack-type potato, and free-range eggs.

‹ ›
Keywords:
SeronRimaNuevoJamon
Your comment has been forwarded to the administrator for approval.×
Warning! Will constitute a criminal offense, illegal, threatening, offensive, insulting and swearing, derogatory, defamatory, vulgar, pornographic, indecent, personality rights, damaging or similar nature in the nature of all kinds of financial content, legal, criminal and administrative responsibility for the content of the sender member / members are belong.
Related News