"Serial thinker", the philosophy teacher who is a hit with his TikTok videos

"We say young people are not curious, they no longer ask themselves questions. 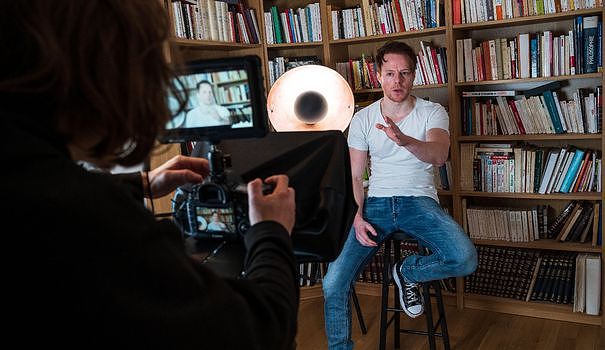 "We say young people are not curious, they no longer ask themselves questions. I think that's completely false, they (are) asking themselves a lot. But the current education system does not encourage the emergence of these questions. “, believes this 41-year-old teacher who started “three years ago”, first on Youtube, to “teach differently”.

He baptizes his account "serial thinker", a name he will use on TikTok. An encrypted tribute to Socrates: "he was considered a serial killer ("serial killer", editor's note) while he was a serial thinker", "an old man who walks around Athens asking questions and who was sentenced to death", he explains.

"It's the first that destabilizes the system" and "I wanted to show the badass, martial side of philosophy", he smiles.

To illustrate his questions about love, veganism or the meaning of life, Lev Fraenckel digs into "pop culture" to stick to the "repository of a 16 or 17-year-old youngster" and talk to him about philosophy "in his language", by summoning series ("Snowpiercer", "Dahmer") or blockbusters ("Fast and furious").

His first Youtube videos, aimed more at the general public and some of which exceed twenty minutes, enjoyed modest success.

But in June, at the time of the baccalaureate, he launched on TikTok: the success will be immediate, "with 100,000 subscribers in a few days" and "6 or 7 million views. It was impressive", remembers Mr. Fraenckel.

The secret? Tightly written three-minute videos, shot in his Strasbourg apartment with a former student, Simon Schott, who set up his production company, Wolfdog. Real revision sheets in which, in jeans and t-shirt, he summarizes in a relaxed tone the 17 notions of the philosophy baccalaureate (the State, the Unconscious, Language, Freedom...).

Punctuated with quotes from key authors, they are quickly a hit with high school students in the middle of revisions before the philosophy test.

According to many students, their efficiency is formidable. A medical student, 18-year-old Cyril Hadef from Strasbourg, says he had "19" at the baccalaureate thanks to them: Lev Fraenckel "has the gift of managing to simplify fairly complicated things to make them something" understandable by "all the world", enthuses the young man.

"Proof", for the teacher, that his "method works. We can do serious philosophy" which will at the same time be "a little entertaining".

"I don't like things that are too closed", continues the one who, as a child, did not appreciate "school too much" but asked himself "lots of existential questions". But at the time, "I was told: if you do philosophy, you'll end up a tramp", he recalls.

After a few years in the chartered accountancy, he realizes that he risks "withering away completely" if he remains in this field and enrolls in philosophy at the University of Strasbourg. A "shock", by his own admission: "I say to myself: here, this is where I should have been forever".

He began a thesis, still in progress, on psychoanalysis and existentialism, and in 2014, successfully passed the Capes in philosophy.

Currently on availability from the Strasbourg high school where he teaches, he still gives courses in the history of religions at the university, just to keep a foot in teaching "IRL, in real life" ("in real life"), laughs the one who gives himself a year to live from his activity on TikTok.

He will soon be releasing a book "to help Terminale students pass the philosophy baccalaureate". Others will follow, "larger public", in which he intends to develop themes addressed in certain videos, for example "Does Mbappé deserve his salary?"

And at the beginning of December, he will put online an exchange with Gad Elmaleh around his film "Reste un peu", a story of religious introspection.

"More quirky things," says Lev Fraenckel. "I give what I love. Philosophy, for me, must also have a fun aspect."