Segura de la Sierra, a 'One of Spain's Most Beautiful Towns' is the first Jaen.

After being added to the network in January, the sign that recognizes Segura de la Sierra as one of Spain's Most Beautiful Towns is now officially displayed. 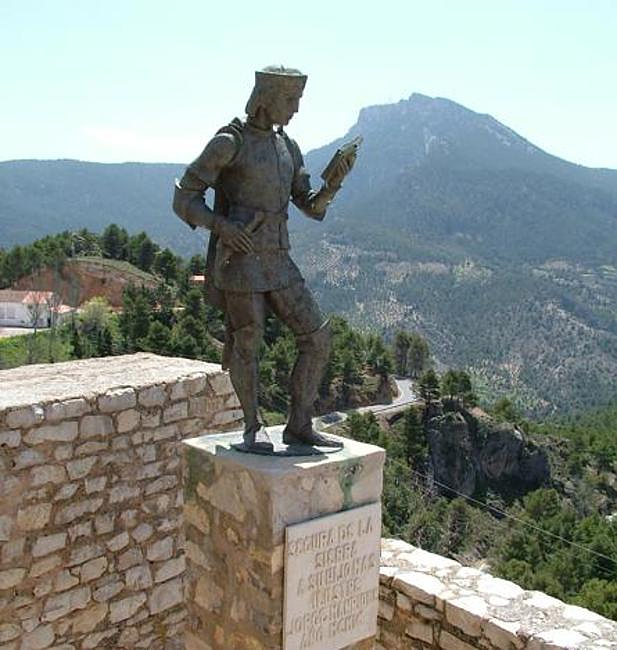 After being added to the network in January, the sign that recognizes Segura de la Sierra as one of Spain's Most Beautiful Towns is now officially displayed. Segura de la Sierra is the first Jaen town to be included in this network, which includes towns with less than 15,000 residents.

The official act of presenting posters was held in the Segura de Sierra Town Hall Square. He was joined by the Second Vice President and the Deputy for Promotion of Tourism of the Hon., Jaen Province Council, Mr. Manuel Fernandez Palomino, and the Delegate of Tourism, Culture and Sports of the Junta de Andalucia, Jaen, Ms. Pilar Salzar Vela, the mayor of Segura de Sierra, Ms. Maria Esperanza Chinchilla, and the President of the Association of the Most Beautiful Towns of Spain, Mr.

Francisco Mestre, President of the Association of the Most Beautiful Towns of Spain, stated that Segura de la Sierra is a unique town because of its cultural, artistic and architectural heritage. Segura is proud to be the first municipality in Jaen to join this network of great quality. Residents and institutions will have the opportunity to better promote Segura de Sierra, a beautiful town with the charm of a walled town. We will continue to work with the association to preserve its heritage, protect its traditions, improve sustainable tourism, and most importantly, improve the quality of life for the neighboring communities.

Maria Esperanza Chinchilla was the mayor-president for Segura de Sierra. She stated that today "we live the reality of an exciting project, an opportunity value the beauty of Segura, rich heritage, to bring people closer to this beautiful town, its customs, and its good people. In short, everything that generations upon generations of Segurenos left us as an inheritance and that we all strive to improve every day."

Manuel Fernandez Palomino, Second Vice President and Deputy to Promotion and Tourism of Hon. Jaen Provincial Council, stressed that all residents and institutions are aware of the journey that led to this recognition. It has been many years and quiet work that culminated today with the unveiling of the poster that recognized us. But we also know that this is only the beginning of a new commitment that each of us will make to continue to beautify and improve our community every day.

Pilar Salazar Vela, Delegate for Tourism Culture and Sports at the Junta de Andalucia, Jaen. This award, which is part of an international network that has gained prestige, confirms the hard work of many generations.

A series of traditional events and tastings featuring products from Segura de la Sierra have been planned to celebrate Segura de la Sierra's inclusion in the network. The traditional sweets of the region were available to be sampled by attendees, along with cuerva and mistela liqueurs made with wine, lemon, and washed down with wine and lemon. The Orospeda group performed traditional mountain music and the Gascon Brothers Duo paid tribute to Spanish songs and zarzuelas with cante and piano at the end of the event.

Francisco Mestre stated that the unveiling of the poster containing the name Segura de la Sierra as well as the logo of the Association's logo will be a symbolic gesture to recognize the municipality of Jaen for "the work well performed for generations to maintain and improve its architectural beauty and cultural heritage, its traditions, and its environment as well as establishing an important turning point in the improvement Segura de la Sierra towards excellence in tourism in the future". The event will allow residents to learn more about the Association and the projects they are planning to carry out in their community.

Segura de la Sierra was designated a Historic-Artistic Site on 22nd September 1972. This is due to monuments like the Mudejar Castle, a Muslim-derived castle (with the category National Monument), and because they evoke the past. Segura de Sierra is like a time travel.

This villa is situated in the Natural Park of Cazorla Segura and las Villas. The surroundings of this villa are of unique beauty. From the same municipality, you can enjoy spectacular views of the whole region and the natural park at the summit of Mount Yelmo. Segura de la Sierra is an ideal place to practice free flight and mountaineering.

The Association membership will help attract more tourists to the area, increase business and hotel activity, and result in a positive economic impact for the region. The data from the various departments of tourism show that the Association towns experience significant growth in visitor arrivals. This includes an average increase of 70%, reaching historic figures like Anento (343%) and Calaceite (60%).

In 2018, eleven new municipalities were created

Eleven towns were awarded the title of "Most beautiful Town in Spain" in 2018. They will now be part of a network which will include 68 other towns that are grouped under this quality brand.

‹ ›
Keywords:
SeguraSierraPueblosBonitosEspañaPrimeroJaen
Your comment has been forwarded to the administrator for approval.×
Warning! Will constitute a criminal offense, illegal, threatening, offensive, insulting and swearing, derogatory, defamatory, vulgar, pornographic, indecent, personality rights, damaging or similar nature in the nature of all kinds of financial content, legal, criminal and administrative responsibility for the content of the sender member / members are belong.
Related News