Sanchez appeals to the PSOE's "red pride" to win the 19J, voting "en masse", for Espadas to become president

Pedro Sanchez, the Secretary General of PSOE and President in the Government, claimed Sunday the "red pride", of the PSOE to win the Andalusian elections of June 19. 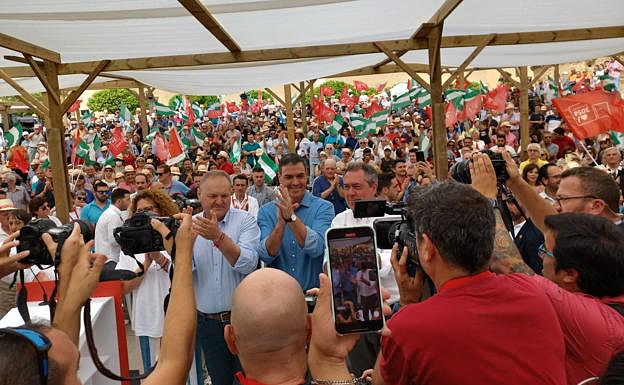 Pedro Sanchez, the Secretary General of PSOE and President in the Government, claimed Sunday the "red pride", of the PSOE to win the Andalusian elections of June 19. He also called upon the Socialists "vote...en masse" that day, convinced that Juan Espadas, his candidate for Presidency of Board, will reach the San Telmo Palace.

Pedro Sanchez has sent these messages of support for the socialist candidate to Board during the first rally of the electoral campaigns of June 19, in which he participated in Andalusia. He covered Juan Espadas in the Almeria municipality Cuevas del Almnzora.

According to calculations by the socialist organisation, Pedro Sanchez claimed that the PSOE was "the party that best protects the interests of Andalusia" and criticised the attitude of the PP to opposition to the Government of Spain. He voted "against all the social advances" made by the coalition Executive of PSOE/United We Can throughout the legislative session.

Pedro Sanchez called all those who wish to consolidate and advance social achievements in Andalusia, given the coincidences he sees between Vox and PP, to vote on June 19, "to the red of PSOE". The President of the Government sentenced, "There are many reasons, reasons, and a lot pride for it".

‹ ›
Keywords:
SanchezApelaOrgulloRojoPSOEGanarVotandoMasaEspadasPresidente
Your comment has been forwarded to the administrator for approval.×
Warning! Will constitute a criminal offense, illegal, threatening, offensive, insulting and swearing, derogatory, defamatory, vulgar, pornographic, indecent, personality rights, damaging or similar nature in the nature of all kinds of financial content, legal, criminal and administrative responsibility for the content of the sender member / members are belong.
Related News