Castillo Marques De los Velez de cuevas de Almanzora is a socialist fiefdom that has been the focal point for leaders and loyal socialists in the run-up to the June 19 elections, in which Juan Espadas, the general secretary of Andalusian PSOE stands as a candidate. 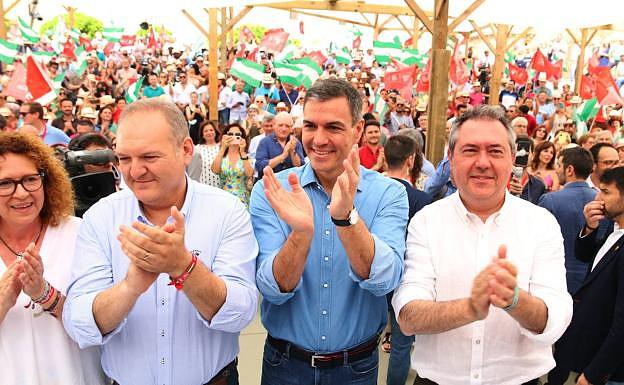 Castillo Marques De los Velez de cuevas de Almanzora is a socialist fiefdom that has been the focal point for leaders and loyal socialists in the run-up to the June 19 elections, in which Juan Espadas, the general secretary of Andalusian PSOE stands as a candidate. With the help of Pedro Sanchez, the leader of Almeria Maria Lopez, and Antonio Fernandez, head of Cuevas del Almnzora's party, swords were counted. It was a morning of great inflow, and it was sunny and peaceful despite the heat, which Sanchez highlighted during his speech.

Antonio Fernandez, general Secretary of the PSOE Cuevas de Almanzora, initiated the rally. His speech was the shortest, without doubt. He began by defending "the social achievements we are achieving together", referring specifically to Pedro Sanchez, "from Moncloa". Progress achieved in "the most difficult times for Spain" and "the world", and with an "unfair, destructive" opposition. Juan Espadas, his party partner, said that there is only one thing to be hopeful for: "That he is the next President of the Junta de Andalucia." It is time to "be in the street with neighbors and do what they do from humble, recover the vote. Create quality public services that all can access. This will guarantee freedom in a fair society."

Maria Lopez, president and mayor of Garrucha of the PSOE in Almeria, said more. "The PSOE of Almeria works so that all of us represent us in the Andalusian Parlament and win the elections," said Lopez, an Almeria leader. Lopez said, "I know them all. The candidates that you will have at your side as president, are honest, hardworking, and loyal Almerian people with land and party." Cuevas de Almanzora, Garrucha's mayor, was "full" of socialists, who continued to fight for equality and freedom for their grandparents and parents who fought here. You have made this a cultural reference. It is full of wisdom, and it is the best reference for our grandparents." Lopez said Pedro Sanchez had thought about the workers, children, self-employed, companies, and women, for whom the socialists worked hard to attain the equality we enjoy today.

Juan Espadas was the next speaker. He is the general secretary of Andalusian PSOE, and candidate for the elections. Espadas considers Andalusia "the heart and soul of the PSOE in Spain" and believes that when it beats, Spain vibrates. Swords said that the Socialist Party is "a tide that identifies more with Andalusian society with its problems, needs, and experiences than we have after two years of such a difficult time."

He believed that the PSOE had led this crisis, vaccinations and taken the necessary measures to protect Andalusians. He also boasted of "the decisions to conserve our natural heritage, as we are in Almeria near Cabo de Gata," and another decision that the socialist government made, which was able to make conservation compatible with sustainable development. What would have happened to Cape if the Andalusian parliament had not taken the decision to defend itself ?>>, Swords?

Green policies were also possible, as Andalusia had to make it clear that its policy must include correct actions in fighting climate change. This is why public investment is required. Swords stated that the 12,000,000,000 euros of European funds Andalusia has decided to manage must be used to "protect the coastline, biodiversity, and our energy efficiency with this Almeria solar that was at the forefront in European energy policy."

The candidate appealed to Andalusia for quality employment and new sectors that protect human beings and the environment.

The President of the Government Pedro Sanchez gave the climax. He admitted that there are many reasons for being proud of the country's response to conflicts like war or the covid panademic.

Sanchez thanked the Spaniards for their exemplary support to the vaccination process. This has allowed 92% to have the complete and protected guideline to prevent covid. He also thanked some health professionals who gave everything including science and life in record time to help us find the solution to this pandemic.

He boasted about the "unique" employment data that he had seen since 2008, when a socialist government was formed with Zapatero. Today's SMI is 1,000 euros. He referred back to the previous crisis in which "then, they were fired, and today, in the worst covid, we protect 3.5 million workers and 1.5 million self-employed, and hundreds of thousands more companies."

He also asked Espadas to vote for him as the next President of the Board to ensure that Almeria has "its best ally in Juan", because in this province the Mediterranean Corridor is 3,000m euros of investment. 47% of it will be allocated to the Almeria railroad connection for efficiency in irrigation. We are also taking care the Almeria coast.

Finally, he claimed the PSOE's "red pride" for winning the Andalusian elections in June 19th. He also called for Socialists to vote en masse that day, believing that Juan Espadas, their candidate for Presidency of Junta, would achieve the goal of reaching San Telmo Palace.

‹ ›
Keywords:
SanchezApelaOrgulloRojoPideVotarMasaEspadasJuanMejorAlidado
Your comment has been forwarded to the administrator for approval.×
Warning! Will constitute a criminal offense, illegal, threatening, offensive, insulting and swearing, derogatory, defamatory, vulgar, pornographic, indecent, personality rights, damaging or similar nature in the nature of all kinds of financial content, legal, criminal and administrative responsibility for the content of the sender member / members are belong.
Related News