Yesterday, after two years of silence, the municipality welcomed San Isidro, its patron saint, to celebrate the occasion. 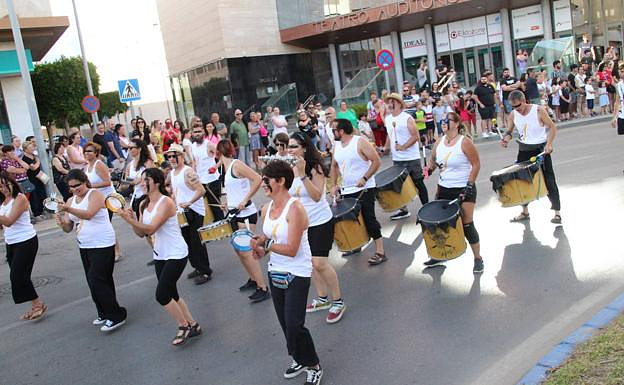 Yesterday, after two years of silence, the municipality welcomed San Isidro, its patron saint, to celebrate the occasion. They filled the streets, and enjoyed until late the first day of five days of celebrations that are planned.

The afternoon began at seven o'clock with the traditional Battle of the Flowers. It featured a procession of over 200 participants, 11 elements and colorful parades like that of the Hipocampus Company, the batukada of "Kalima du Samba" and the participation of the AMASAL Cultural Musician Association.

The most popular and most well-received activities during the program are the color performances and exhibitions.

In the meantime, at eight in the afternoon in the Municipal Park where most of the activity was concentrated on the first holiday day, distribution of the Holiday Book began.

Two hours later at 9:00 p.m., official lighting took place. This extraordinary lighting adorns the streets with intricate lighting. This year, this year, 5,000 LED bulbs were installed in the Fairgrounds area. This is in keeping with the City Council's goal of energy efficiency and low-consumption lighting.

To provide light and create a festive atmosphere, the arches are maintained in the streets.

After the official lighting of all the lights, the Proclamation was started on the stage in the southern section of the municipal park. It was in charge of Gabriel Gimenez, a great Ejido athlete.

Francisco Gongora, the mayor of El Ejido, stated that the El Ejido name has been carried around the world as a referee at international volleyball games. He also recalled that Gabriel has been associated with sport since he was the director of IMD. This has allowed him to promote sport for all ages, in close collaboration and cooperation with athletes and clubs.

This is to say that El Ejido today is a municipality that is active in sports and has high-level athletes. It also cares for its elderly and children through sports. Sport is an exceptional tool to foster cohesion and social integration and helps us live a healthier lifestyle. Gabriel Gimenez is a key figure in a current activity. This has caused us to feel pride and it has not gone unnoticed. Gabriel loves El Ejido and wants it to be a healthy, active, and cohesive municipality.

Gimenez stated that El Ejido had a centuries-old agricultural tradition. That tradition, that history was the reason that the Ciavieja mosaic discovery was the knock that woke us up from our lethargy regarding the search for our history."

Gimenez also mentioned the fact that an ejido citizen is "assessed by the things that depend upon him, not others", and invited his neighbors to participate in sports. "Because he acts and favors inclusion, and for that We have a wonderful tool, the IMD as a unifying factor for the practice of sports in our municipality. Sport instills positive values such as improvement, discipline and honesty, camaraderie with others, solidarity, and responsibility.

The head of the municipality made a wish at the end of the event: "May San Isidro be with us, protect us through the year, and watch over our country, our farmers, and all those who live in this land of El Ejido.".

After a cheered Proclamation, it was the time for the Coronation and Ladies of Festivities in the 2022 edition. Miss Ejido was also in attendance. The music on the first night was provided by the El Ejido Symphonic Band, who once more surprised the public with a concert in collaboration with Los Vinilos.

The fairground was located behind the municipal park. It opened at 6 p.m. on the first day of Children's Day. Little by little it increased in activity and bustle.

It was obvious that students wanted to party, especially when they were able to gather with those who had already finished the course and those who have taken the university entrance exams. It was time to celebrate and share.

‹ ›
Keywords:
LucesMúsicaDiversionArrancanFiestasIsidro
Your comment has been forwarded to the administrator for approval.×
Warning! Will constitute a criminal offense, illegal, threatening, offensive, insulting and swearing, derogatory, defamatory, vulgar, pornographic, indecent, personality rights, damaging or similar nature in the nature of all kinds of financial content, legal, criminal and administrative responsibility for the content of the sender member / members are belong.
Related News