Daria Douguina, journalist and political scientist, was killed on Saturday evening in the explosion of the vehicle she was driving on a road near Moscow. 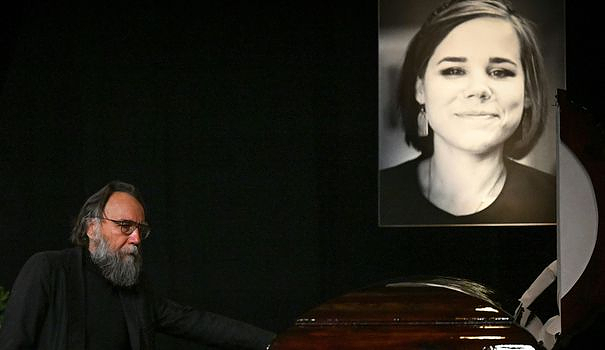 Daria Douguina, journalist and political scientist, was killed on Saturday evening in the explosion of the vehicle she was driving on a road near Moscow. She was 29 years old.

She was the daughter of Alexandre Douguine, 60, an ultranationalist philosopher and writer promoting an imperialist doctrine. Like her father, she fiercely supported the Russian offensive in Ukraine.

They were returning together, but in different vehicles, from a conservative cultural festival in the Moscow region.

"It was a barbaric crime for which there can be no forgiveness (...). There can be no mercy for the organizers, the sponsors and the performers", reacted Tuesday the Russian Minister of Foreign Affairs, Sergei Lavrov.

Hundreds of people, including relatives and politicians, gathered in Moscow on Tuesday in front of the coffin of Daria Douguina, above which a smiling portrait of her had been hung, AFP noted.

"She died at the front for the nation, for Russia. The front is here," said Mr. Dougin, in a trembling voice, his eyes darkened, present with his wife and Daria Douguina's mother, Natalia Melentieva.

“Among the first words we taught him, in his childhood, there is obviously Russia, our power, our people, our empire,” said Alexander Dugin, holding back tears.

This murder created a shock in Russia and undermined the efforts of the authorities who seek to convince that the offensive in Ukraine, launched six months ago, has no negative consequences for the Russian population.

However, the conflict has become more and more visible in recent weeks, with in particular a series of explosions in Crimea, the Ukrainian peninsula annexed by Moscow where many Russians traditionally spend their holidays.

Less than 48 hours after the death of Daria Dugina, the Russian security services (FSB) said on Monday that they had concluded that the attack had been planned and carried out by a woman working for the Ukrainian secret service. kyiv has denied any involvement.

In a message of condolence, Russian President Vladimir Putin denounced a "despicable, cruel crime", which "prematurely ended the life of Daria Duguina, a brilliant and talented person with a truly Russian heart".

Mr. Putin also posthumously presented him with the Order of Courage, an important decoration.

The spokesman for the American diplomacy, Ned Price, abstained on Monday from any speculation on the responsibility for the murder. He condemned any attack on civilians and stressed that Kyiv had rejected any involvement.

"Since the murder of a journalist is not even commented on from this angle, which is nevertheless so important for the American authorities, then Washington has no moral right (...) to judge human rights in the world", reacted his Russian counterpart, Maria Zakharova, on Telegram on Tuesday.

Promoter of "Eurasism", an imperialist doctrine advocating an alliance between Europe and Asia, under Russian leadership, Alexander Dougin has been targeted since 2014 by European Union sanctions.

Her daughter had been sanctioned in early March by the United States.

Media personality and polyglot, recognizable by his long beard, Alexandre Douguine is influential in part of the European far right.

Nicknamed by some media "Putin's brain", Mr. Dougin is sometimes presented as being close to the Russian president. But the latter has never supported him publicly and many observers put his influence in the Kremlin into perspective.