Crimea, annexed in March 2014 by Russia after an intervention by its special forces and a referendum denounced by kyiv and the West, serves as the headquarters of this fleet and as a logistics rear base for the Russian offensive in Ukraine. 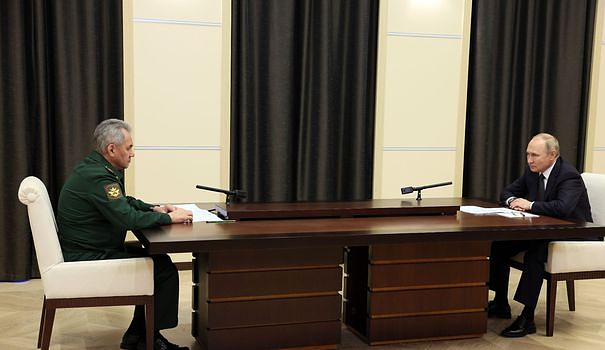 Crimea, annexed in March 2014 by Russia after an intervention by its special forces and a referendum denounced by kyiv and the West, serves as the headquarters of this fleet and as a logistics rear base for the Russian offensive in Ukraine. Military and civilian installations have been targeted there several times in recent months.

Pro-Russian authorities on the peninsula announced early Saturday morning that ships of the Russian Black Sea Fleet had repelled a drone attack in Sevastopol Bay and that all craft had been shot down.

"No installation in the city has been affected. The situation is under control," said the pro-Russian governor of the city, Mikhail Razvojayev.

The Russian Defense Ministry reported "minor damage" to the minesweeper vessel Ivan Goloubets, as well as to the bay containment dam.

"The preparation for this terrorist act and the training of military personnel of the 73rd Ukrainian Special Maritime Operations Center were carried out by British specialists based in Ochakov, in the Mykolaiv region of Ukraine," the Russian Defense Ministry said on Telegram.

Mr. Razvojayev referred to "the most massive attack by drones and remotely piloted surface vehicles on the waters of Sevastopol Bay in the history" of the conflict in Ukraine.

According to Moscow, the attack involved "nine unmanned aerial vehicles and seven autonomous maritime drones" and targeted ships that are helping to secure convoys responsible for exporting Ukrainian grain under an agreement concluded under the aegis of the UN and Turkey.

Russia recently criticized the deal, arguing that its own grain exports were suffering because of the sanctions.

Attacks targeting Crimea have increased in recent weeks as Ukrainian forces advance on the southern front towards the city of Kherson, turned into a fortress by the Russians awaiting the inevitable assault.

On Thursday, Mr. Razvojayev announced that the Balaklava thermal power plant had been targeted by a drone attack which had not caused major damage or casualties.

In August, he reported a drone attack on the Russian Black Sea Fleet headquarters in Sevastopol without causing any casualties, after a first strike a few days earlier that injured five people.

An airfield and a military base were also victims of explosions in August in Crimea, attacks for which Ukraine ended up recognizing responsibility several weeks after the fact.

In early October, it was the Crimean Bridge, a key infrastructure for the peninsula that connects it to Russia, inaugurated at great expense by Vladimir Putin in 2018, which was damaged by the explosion of a truck bomb.

Elsewhere on the ground, the Ukrainian military reported fighting in the Lugansk and Donetsk regions in the east, including near Bakhmout, the only area where Russian troops have advanced in recent weeks, and shelling in several others. regions.

Pro-Russian separatists fighting alongside Moscow have announced a new prisoner swap with kyiv involving 50 people on each side.

On the southern front, AFP journalists witnessed artillery battles in the village of Kobzartsi, the last town on the Ukrainian side before the line of contact with the Russians.

"It can go wrong there. But we know that they suffer much more on their side than on ours", assured a Ukrainian soldier, Oleksiï, in his twenties.

Both sides are preparing in this area for the battle for the city of Kherson, the regional capital, from where the occupation authorities have evacuated tens of thousands of civilians, whom Ukraine has described as "deportations".