Russian aviation sought to prove that it was still within reach of Odessa (the main port still under the control of Volodymyr Zelensky) just a day after its troops were forced to leave Snake Island. 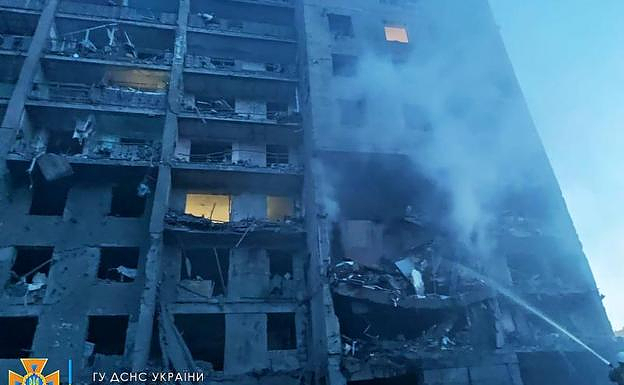 Russian aviation sought to prove that it was still within reach of Odessa (the main port still under the control of Volodymyr Zelensky) just a day after its troops were forced to leave Snake Island. This island is of vital importance to the defense of the Ukrainian coastline in Black Sea. Three bombers fired three rockets at Odessa on Thursday night. Two children and 38 others were wounded. Five minors were also admitted. One of the victims was in a serious condition, according to the data provided by the District attorney.

One rocket partially destroyed a nine-story residential structure, while the others hit two resorts. According to the State Emergency Service of Ukraine, (GSChS), four children and a pregnant lady were among those who were injured. Eight people were rescued from the rubble, including three very small ones.

According to the Southern Operational Command of the Ukrainian Army, "a night attack with missiles of Tu-22 strategic aircraft over the Black Sea airspace resulted in three X-22 missiles - the exact same ones used on Monday against the shopping centre of Kremenchuk – hitting an apartment building and two rest centres in the Belgorod Dnestrovski region of the Odessa." Andrei Yermak (head of the Presidency) also echoed this attack via his Telegram account, assuring the world that "a terrorist nation is killing our people."

This is the second Odessa operation in less than one day. Maxim Marchenko (head of the regional military administration) reported that rocket fire was being used in the area on Thursday afternoon. However, he said that there were no casualties and that the damage had not been significant. The Kremlin troops were forced to leave the area the following another heavy bombardment by Ukrainian forces on Snake Island. It is located several tens and kilometers from Odessa. However, the Russian Defense Ministry presented it as a "goodwill gesture".

"Invaders can't win on the battlefield, so they resort to cowardly killing civilians." Ivan Bakanov (head of the Security Service of Ukraine) stated that the enemy had been expelled from Snake Island and decided to bomb homes and rest centres as if they were military bases. According to Bakanov, the Russian Federation's goal is "the literal destruction of Ukraine and its people."

Dmitri Perskov, the Kremlin's spokesperson, released information yesterday about Odessa. He assured that the Armed Forces of the Russian Federation did not intervene against civilian targets. Peskov stated to reporters that he would remind them of Vladimir Putin's words. "The Army does not attack civilian targets or infrastructure during the special military operation."

This is the morning footage of the rescue operation at 3 locations.

Despite multiple testimony from humanitarian and international human rights organizations, the Moscow authorities still deny that civilians were targeted despite numerous evidence. This evidence is recognized by the UN. However, the Kremlin denies that such reports are being used.

While the main focus of Russia's war effort is in eastern Ukraine and its allies, Russia continues to use longer-range missiles against cities throughout the country. The number of people who have been killed continues to rise. Yesterday, the authorities in Mikolaiv in the south of Russia raised the death toll from eight to eight following a missile attack by Russian troops on a residential building. According to the State Emergency Service, a body of a man was discovered under the rubble of an elevator on Thursday night.

A recreation center was destroyed by the second projectile / reuters

Oleksander Senkevich was the mayor of the city. He stated Wednesday that the invading army had fired a dozen missiles at the city. However, the building was damaged by an X55 cruise missile.

According to President Zelensky's office news also broke of a series attacks that took place in the past 24 hours, resulting in four civilian deaths in the region of Kharkov in the northeast and four more in Donetsk. These same sources reported an "intensification” of Kremlin offensive operations in Kramatorsk with an attempt at seizing the highway linking Bajmut to Lisichansk.

General Staff of Ukraine Army also mentioned unsuccessful attacks against Siversk and Bilohorivka during the last day. He said, "The enemy is focusing its efforts on encircling troops in Lisichansk form the south and west to seize full control over the Luhansk area." His spokeswoman said that in this context, the invaders had fired artillery on Berestove and Yakovlivka, Vidrodzhena Mayorsk, Vihledarska, and the surrounding areas of Bajmut.

‹ ›
Keywords:
MuertosAtaqueRusoMisilesOdessa
Your comment has been forwarded to the administrator for approval.×
Warning! Will constitute a criminal offense, illegal, threatening, offensive, insulting and swearing, derogatory, defamatory, vulgar, pornographic, indecent, personality rights, damaging or similar nature in the nature of all kinds of financial content, legal, criminal and administrative responsibility for the content of the sender member / members are belong.
Related News