She just got the same awkward design tattooed on her arm, because she wanted to "have a piece of Artiom forever" on her body. 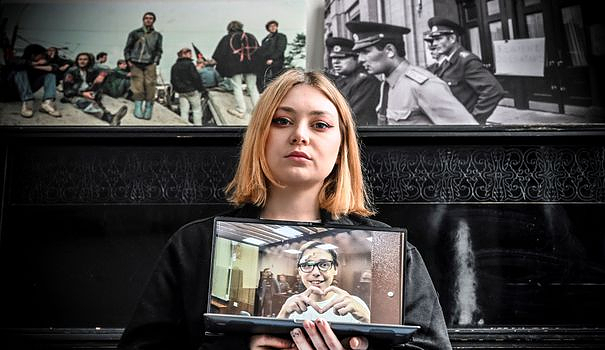 She just got the same awkward design tattooed on her arm, because she wanted to "have a piece of Artiom forever" on her body. Unless, she says still laughing, we don't "cut her skin".

In September, Artiom Kamardine, 32, was arrested and, he says, raped by police. His crime? Reciting a poem against the offensive in Ukraine. Since then, Alexandra Popova, 28, has clung to small symbols so as not to sink.

A few months ago, this couple thought they had the future ahead of them. But after the intervention of Russian troops in Ukraine, the lovers were caught up in the repressive machine which accelerated in Russia.

This armed conflict forever separates thousands of couples and families broken by death. Tens of thousands of others, more fortunate, must nevertheless experience a painful separation, caused by military mobilization or forced exiles.

For Artyom and Alexandra, it was their opposition to Vladimir Putin that plunged them into hell. September 26, to be exact.

That day, hooded police burst into their apartment: they are looking for Artiom, whom they take to a separate room. To his lawyer, he claims to have been beaten up and sodomized with the bar of a dumbbell. Alexandra says that the police brutalized her, sprinkled her cheeks and her mouth with strong glue, and threatened with "gang rape".

In the aftermath, Artiom is forced to present an apology filmed and broadcast on the Internet. A common punishment in several authoritarian regimes, but rare in Moscow.

According to Alexandra, Artiom was threatened, after his arrest, with being raped in prison. Since then, he has refused to publicly discuss the subject.

The couple filed a complaint and the Russian Investigation Committee announced, at the end of November, a verification for possible "abuse of power", according to a document consulted by AFP.

Alexandra is traumatized. "At home, I imagine that the door will be broken down, or that I will be followed or tapped," she confides. "I know it's paranoia, it's not real, but I don't have a sense of security anymore."

The day before his arrest, Artyom had recited one of his poems during an "anti-military mobilization" reading in front of the statue of poet Vladimir Mayakovsky in Moscow, a place where dissidents have gathered since the Soviet period.

The text in question, "Kill me, militiaman!", is a middle finger addressed to pro-Russian separatists in eastern Ukraine.

During his performance, Artyom Kamardin also shouted an offensive slogan against the imperial plan of "New Russia" to annex southern Ukraine.

"His poetry is very brutal, but he is a very sweet boy", comments Alexandra.

She learned by heart the article of the penal code for which Artiom is prosecuted: article 282, part 2, point A. "Incitement to hatred with violence or threat of violence." Maximum penalty: six years in prison.

Alexandra and Artiom met in 2019 during an opposition demonstration. They first became friends, then, last year, the young woman gave in to the advances of the young man. "You can't run away from love," she says.

He is an engineer and mad about poetry. She then worked for the Yabloko opposition party. They are part of this politicized Moscow bubble, mixing artists, journalists and activists. "A way of life, not a hobby", emphasizes Alexandra.

Their community is now hit by an exacerbated repression. Thousands of fines and hundreds of prison sentences fell on those who denounced the offensive in Ukraine. Many fled the country.

Alexandra and Artiom had themselves suffered a first punishment. In the spring, they were arrested during an anti-war demonstration. For this, he received a simple fine, but she had to serve 25 days in detention.

Today, the two lovers want to get married in prison. This will make it easier for Alexandra to visit Artyom. She has not seen him since his arrest.

On November 24, we find her during a hearing on the extension of Artiom's pretrial detention. But the poet is not presented to the judge that day, because he was transferred to a psychiatric hospital for an "expertise".

On leaving the court, Alexandra has a lump in her throat. "I was hoping to see and hear him." His hands are shaking with cold. It's late. "I have to go home." She lights a cigarette and leaves in the night.