"Ruptures are accelerating": are we going to run out of certain drugs this winter?

In the back rooms of more and more pharmacies, certain medicine boxes disappear for a few days, sometimes for months. 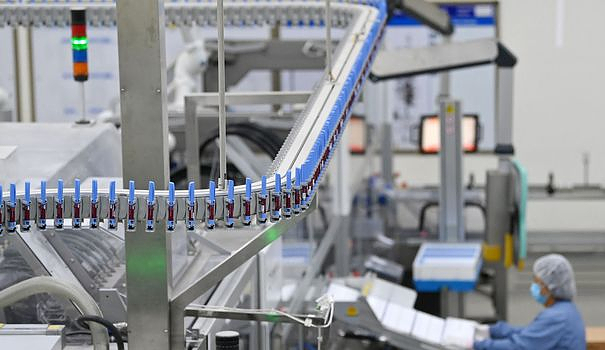 In the back rooms of more and more pharmacies, certain medicine boxes disappear for a few days, sometimes for months. "I have about 90 to 100 molecules out of order. It varies: paracetamol, antidiabetics, anticancer drugs or antihypertensives", says Pierre-Olivier Variot, president of the Union of community pharmacists ( USPO). According to the practitioner, the situation is unprecedented and the deficiencies are intensifying. He is far from the only one to make this observation.

With the season of colds and other infections approaching, medical organizations are alarmed at the risk of drug shortages in Europe, a consequence of the war in Ukraine and the energy crisis. This context accentuates supply tensions already present and identified on French territory, plagued by recurring problems for ten years. Many molecules, sometimes vital for some patients, are already out of stock.

Latest alert to date: the Medecines for Europe union sent an open letter to the European Commission, published on September 27, on the risk of a shortage of generic drugs due to the explosion in energy prices. Some drugs "require energy-intensive processes for the production of active ingredients or formulations", recalls the organization. Without a boost from the States, European production would not be "viable", due to production costs.

"Any production stoppage, even temporary, would have adverse effects on the supply of medicines to patients, on the supply of medicines to patients and would require a significant effort and long delays to resume operations", thus insisted Medecines for Europe. Yet another proof of the fears that hover around part of the production, while the health crisis and the cessation of trade have demonstrated that it was risky to rely on imports.

"The phenomenon is recurrent. For 7 or 8 years, the union has identified tensions in the supply of certain drugs. These are not always the same. But for about two years, the shortages have been accelerating", specifies Pierre-Olivier Variot. He is worried about seeing the crisis hit France first. In 2021, the National Agency for the Safety of Medicines and Health Products (ANSM) had already received 2,160 reports for ruptures or risks of ruptures. This is five times more than in 2016.

Beyond the production difficulties linked to the crises (Covid-19, Ukraine), the trade unionist warns of very French "micro-breaks". "Manufacturers prefer to give priority to other countries, because in France the prices are the lowest in Europe," he says. Result: the share of medicine allocated to France would be reduced and, according to him, certain intermediaries would benefit from it. "Depositories resell drugs intended for the French market elsewhere, to make a profit", assures Pierre-Olivier Variot.

In response to this situation, the ANSM has increased its fines against manufacturers who have not made enough efforts to guard against shortages. They must keep stocks destined for France so as to provide patients with a period of two to four months to try to adapt. Since October 1, by decision of the public agency, offending companies must pay 20% of the annual turnover generated by out-of-stock treatments. And the bill will increase for each additional day of shortage.

Until now, it was sometimes more profitable for certain industrialists to pay rather than give up more juicy markets. And in reality, the sanctions were applied very little. “The number of sanctions pronounced remains minimal in view of the number of shortages and the serious consequences for sick people and for public health”, denounced France Assos, on August 30. Only two financial sanctions were awarded in 2020, none in 2021, according to ANSM figures.

Another source of questioning specific to France, the government announced, Monday, September 26, wanting to organize calls for tenders for each disease, a way of putting producers in competition. The proposal is included in Article 30 of the Social Security Financing Bill (PLFSS) for 2023. If, in the short term, the operation could lower costs, numerous reports published over the past ten years highlight the risk of aggravating shortages.

"Some manufacturers could lose markets on which they practiced high margins, and be forced to stop the production of unprofitable molecules to compensate", says Pierre-Olivier Variot. In 2012, a report by the General Inspectorate of Social Affairs (IGAS) showed that the practice of calls for tenders risked leading to relocations, because it would favor companies with low costs. A shame, while France wants to bring its production of drugs back to its territory.