The City Council of Granada has launched a special device in order to ensure the normal development of Rosalia's concert as part of her international tour Motomami World Tour>>. 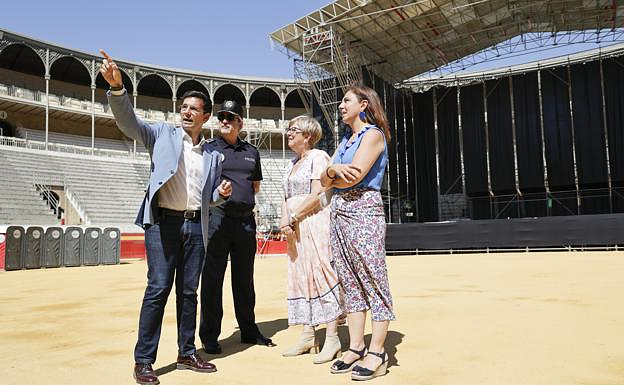 The City Council of Granada has launched a special device in order to ensure the normal development of Rosalia's concert as part of her international tour Motomami World Tour>>. This Tuesday, July 12, Rosalia will be performing at the Plaza de Toros de Granada. Mayor of Granada says that this unique show will return our city to the "international circuits of culture and music".

During a visit to the bullring this morning, the highest municipal official made these statements. Raquel Ruz, the councilor for Mobility and Citizen Security, and Maria de Leyva for Culture, the organizer of the Pro venue event, indicated that Granada is preparing to host the third concert on the world tour starring the acclaimed Barcelona artist. This, he said, will have a significant impact on the city's economic activity.

The mayor indicated that the City Council of Granada had adopted a protocol that included exceptional measures in terms of mobility accessibility and security. This protocol was in coordination with the National Police security forces to ensure that "the concert is a complete success and runs as smoothly as possible."

According to the Councilor for Mobility and Citizen Security a "significant effort will be made by the Local Police" to intensify its presence in the area. A traffic unit will be assigned to order entry to the enclosure with particular attention to Doctor Azpitarte Street, with "the goal of guaranteeing access at the health emergency services". If necessary, it will also cut a lane on Doctor Oloriz street in order to allow access to the Granada bullfighting zone.

Ruz has demanded the use of both public transport and underground car parks. He has indicated that lines 5, 33, and 4 will be strengthened and that the bus service's hours will be extended to 1 AM.

The Operational Group for Attention to Diversity Rapid Intervention Unit will provide security and surveillance to ensure there is no illegal activity. A unit from the UPR citizen attention unit of the National Police will accompany this unit.

‹ ›
Keywords:
DispositivoEspecialRecibirRosaliaGranada
Your comment has been forwarded to the administrator for approval.×
Warning! Will constitute a criminal offense, illegal, threatening, offensive, insulting and swearing, derogatory, defamatory, vulgar, pornographic, indecent, personality rights, damaging or similar nature in the nature of all kinds of financial content, legal, criminal and administrative responsibility for the content of the sender member / members are belong.
Related News