"Hosting the Roquetas Summer Courses has been a great pleasure and this City Council serves as the dean, which is something I am proud to be a part of. 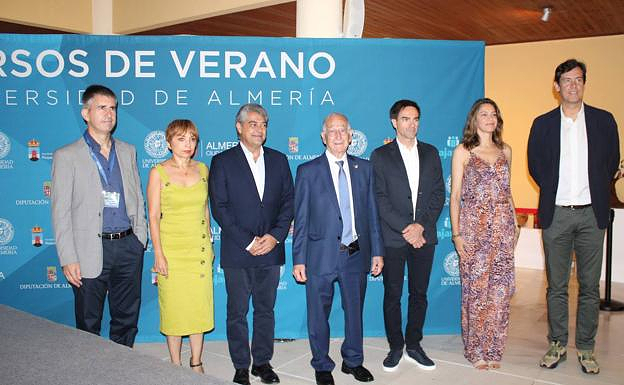 "Hosting the Roquetas Summer Courses has been a great pleasure and this City Council serves as the dean, which is something I am proud to be a part of." Gabriel Amat, the Mayor of Rock, was present yesterday at the University of Almeria's XXIII edition of the summer seminars. The councilor expressed his gratitude to the directors of the four courses that were held in his hometown, saying, "We do it because we are serving our people." He also made direct mention of the idea of decentralizing this educational proposal. "Getting them out there to the province is very essential." Participants already suggested taking advantage of this opportunity "because that's the future, knowledge and wisdom, preparation."

Yesterday the first course started at the Santa Ana castle in the first headquarters-Roquetas de Mar-, and four weeks ahead to ratify the work that has been carried out for months. After analyzing the experiences and listening to students and speakers, we have come to the conclusion that summer courses should be held face-to-face. We want to promote discussion and reflection, said Carmelo Rodriguez. He recalled that there were 24 courses this year and 8 venues. "This edition has a higher presence of courses within the province>>, 275 speakers and specialists on their subjects>>. With an expansion of 800 seats, we have exceeded our expectations regarding the number of students attending>>.

There are 650 formalized enrollments, which will rise in the coming days from the 24-course program. "Half of them have filled all their places and, in additional, they have increased their numbers due to demand." This is clear evidence that "in recent years our summer courses have been a benchmark in summer training offer," he stated verbatim. Another important aspect of the program was "the participation of institutions and entities private and public, more than 30>>." This was emphasized by he stating that the University of Almeria must take care of these synergies. He also stated that the commitment of society to the UAL is a source of pride and an incentive for the summer courses to achieve high standards of excellence.

Almeria, Tijola and Cuevas de Almanzora were greeted by the rector. He also made a special stop at Roquetas de Mar which will be occupied the first week only. "This municipality has been very important in welcoming our courses as well as other UAL proposals such the University for the Elderly.

The XXIII Summer courses of the UAL began with the seminar titled "Lifestyle and Health", co-directed by Jose Manuel Cimadevilla (professor of Psychobiology at UAL) and Antonio Granero (professor of Didactics and Corporal Expression and secretary of the Health Research Center). It will continue until Wednesday inclusive, when the other three courses in Roquetas de Mar begin.

These twenty-third UAL Summer Courses will be a record for the second week. They will host 13 simultaneous seminars on Wednesday, July 13. Some of these seminars will end at the halfway point, while others will start at your specific programming. Almeria, Velez Rubio and Tijola will all be present. This will make them the final venue to start the course, along with Nijar in the third week. Almeria, Velez Rubio, Tijola, Dalias, and Cuevas will all be back there. Gergal will also be there as part of the course "You are also an Astronomer" at the Almanzor Dome, Calar Alto Observatory. All the protagonism for the fourth week of the month will be for Velez Blanco and its XXI Renaissance and Baroque Music Festival. This festival is co-organized and managed by the University of Almeria.

‹ ›
Keywords:
RoquetasRompeHieloCursosVerano2022
Your comment has been forwarded to the administrator for approval.×
Warning! Will constitute a criminal offense, illegal, threatening, offensive, insulting and swearing, derogatory, defamatory, vulgar, pornographic, indecent, personality rights, damaging or similar nature in the nature of all kinds of financial content, legal, criminal and administrative responsibility for the content of the sender member / members are belong.
Related News