Risk of tsunami in the Mediterranean: how France is preparing

They are not a consequence of global warming but the probability that they will hit the French coasts is worrying. 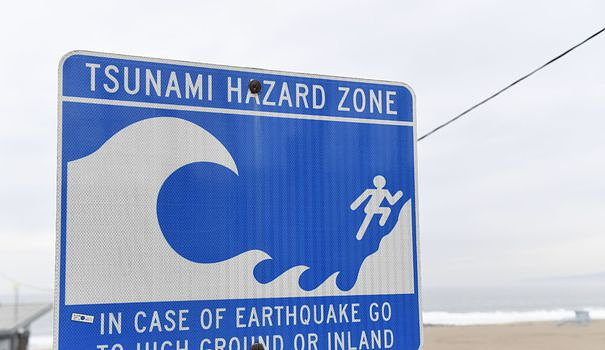 They are not a consequence of global warming but the probability that they will hit the French coasts is worrying. Tsunamis are an ocean wave - a huge wave - originating from an underwater earthquake (or eruption). The most deadly took place in 2004, in Sumatra, off the coast of Indonesia, after an earthquake of 9.1 on the Richter scale, causing the death of 250,000 people. "This disaster acted as an electric shock for the entire international community and the risks, even for France, are not zero in the Atlantic and the Mediterranean", explains Hélène Hébert, geophysicist in the military applications department of the Commissariat. to atomic energy (CEA).

Historically, the most powerful known tsunami to hit Europe was that of Lisbon on November 1, 1755, the magnitude of which, estimated between 8.5 and 9, devastated the port city and caused a tsunami whose effects crossed the Atlantic and were felt as far away as Fort-de-France in Martinique. The Caribbean, which is located not far from known underwater faults, seems precisely to France to be the most exposed, so much so that there is greater awareness of the risk overseas than in mainland France, in particular because the populations are subject to potential recurring "natural disaster hazards" (Piton de la Fournaise in Réunion, hurricanes in Martinique). The fact remains that the metropolis could have to face a similar cataclysm.

"Today, the most feared scenario is on the side of the Big Blue: on the whole coast, which goes from Morocco to Tunisia, there is a real risk since this region happens to be a subduction zone between the African and Eurasian plates, which sees the first advance by 2.5 centimeters per year in the direction of the northeast", explains Pascal Roudil, head of the CEA's Operational Geophysical Surveillance laboratory in Bruyères-le-Châtel (Essonne).

Again, such an event has already occurred in the recent past: first in the Ligurian Sea (north of Corsica) in 1887 (the city of Nice was particularly affected), then on May 21, 2003, when a powerful earthquake was triggered in Boumerdès, a region located in the northeast of Algeria with a magnitude of 6.9. "The tsunami created caused minor damage on the French coasts but it is interesting by its process: immediately after the underwater earthquake, the wave rises slowly but with a horizontal displacement over a long distance, in the occurrence about 200 kilometers, details Pascal Roudil. And the closer the train of waves gets to the mainland, the more it slows down while the amplitude (the height of the wave) increases. Results ? A wave about two to three meters high, a remnant of which ended up stranding in France causing disruptions in eight ports between Toulon and Menton (200 boats destroyed) and causing sudden drops in level linked to the ebb of water .

"Since they are a consequence of earthquakes, tsunamis are not more predictable. On the other hand, at the time of their detection, depending on their power and the place in the Mediterranean where they would be triggered, an hour elapses before the wave does not strike the earth, so that we have a period of time, admittedly short, but which can make it possible to warn populations and save a large number of lives", explains Hélène Hébert. Hence the creation of the tsunami warning center (Cenalt) on the site of Bruyères-le-Châtel (Essonne), which is celebrating its tenth anniversary.

In the main room, about twenty desks with screens everywhere, a bit like in a rocket launch room. On the wall, on the main screen, a huge map of Europe with tiny triangles, some of which flash. "It is a network of tide gauges and seismometers which provide live information on the state of the sea", explains Pascal Roudil. As such, France has, for example, deployed, via the hydrographic and oceanographic service of the Navy, 44 seismometers located in the main ports on the coast of metropolitan France. "Our foreign colleagues have the same instruments and we exchange information continuously", continues the geophysicist. As soon as an alert sounds, an automatic message in English is triggered. The men of Cenalt, who keep watch twenty-four hours a day, 365 days a year, must then characterize the danger according to its degree of importance: "We have three levels - yellow, orange and red - depending on the magnitude of the earthquake and its location. We analyze it and send a message to the operational center for interministerial crisis management of the Ministry of the Interior, which decides on alert measures, first at the level of the prefectures, then of the municipalities concerned.

"Since 2016, we have been carrying out monthly exercises to ensure that the decision-making chain is functioning optimally", explains Yves Hocdé, deputy director for planning, anticipation and crisis management (Ministry of the Interior and Overseas). Concretely, if a red alert were triggered, the authorities would have about fifteen minutes to act and ensure that the populations take shelter. "The main instruction aims to bring them as far as possible from the shore or to bring them upstairs. The order of magnitude is to take refuge 200 meters upstream and at a height of 5 meters", details Yves Hocdé. For this, since last year, the mayors must have established a safeguard plan, by marking paths to help people move away from the shore and by establishing refuge areas. Today, the cities of Cannes and Antibes are among the good students. "But the French people in mainland France are not aware of the tsunami risk, and all our work consists in acculturating them, in particular at the level of schoolchildren or professionals such as restaurateurs who are by the sea", assures Mendy Bengoubou-Valérius, national seismic and volcanic risk prevention referent (Ministry of Ecological Transition and Territorial Cohesion).

One of the solutions will go through our mobile phones. The device called "FR-Alert", deployed on the national territory since June 2022 for industrial risks, will be extended to the tsunami risk in 2023: each inhabitant who is in an alert zone will receive a text message, after the triggering of a siren, with the nature of the danger, its location and the behavior to adopt. But the leaders of Cenalt admit it: difficult to sensitize public actors and the population to a potential disaster of which we have no memory. However, we must prepare for it, according to Unesco experts: "Statistics show that the probability of a tsunami wave of more than 1 meter in the Mediterranean in the next thirty years is close to 100%."