Return to the jungle in Jonestown, 44 years after the massacre

More than 900 people, most of them followers of the American guru-Reverend Jim Jones, perished here, some of their own free will, some carried away by the collective momentum or forced by the leaders of the movement. 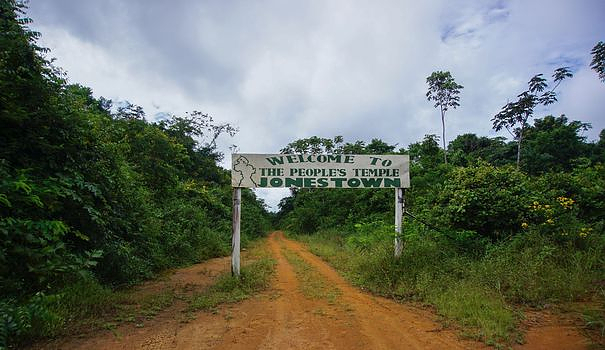 More than 900 people, most of them followers of the American guru-Reverend Jim Jones, perished here, some of their own free will, some carried away by the collective momentum or forced by the leaders of the movement. The world then discovered with horror the power of insanity that could be engendered by sects.

Today, "there is not much to see unless we clear the area," said Fitz Duke, who was 31 at the time, visiting the site with AFP. He claims to have witnessed certain events, without having witnessed the massacre.

Only a small white stele near a recent straw hut bears witness to the drama that took place here. The strange sign at the entrance to the track is post-event, emphasizes. Mr. Duke, who indicates that by excavating the jungle one could find remains of tractors, trucks and undoubtedly foundations of house.

50 years ago, Jim Jones, charismatic enlightened pastor, claiming to perform miracles and oscillating between communism and Protestant fundamentalism, had moved his sect to Guyana where he had acquired nearly 1,500 hectares of land in the middle of nowhere.

Then respected in particular because of his defense of racial equality but also of some political connections, he had succeeded in obtaining a special regime for his organization in Guyana, a very poor country.

With a lot of work and money, the followers cleared the jungle and planted crops: "They had a very good agricultural system. We (the people of Port Kaituma) came to see what they were doing. A lot of people were working for them. They had livestock, poultry, pigs, cows. They were almost self-sufficient," Duke recalled.

"We went there often, they had a good orchestra with lots of instruments," he adds.

But the camp, which wants to give the image of a small paradise on earth, is managed with an iron fist by Jim Jones and his assistants.

"You couldn't move around freely. If a local met a junior (from the cult), very quickly a senior would come and say, 'I'll take care of it and the junior should leave the place. You only dealt with the seniors", explains Fitz Duke, who tells another anecdote.

"There was a big tower that kept watch over the main road. There were always men with binoculars," he says.

"The cars were being searched. Once, I remember, a police car came. They said We're police. We're going in. The others said, No. We don't have time with the police. This is Jonestown. You don't belong here. They had more guns than the police. This wasn't Guyana anymore, it was Jonestown."

In the United States, the living conditions, the restrictions and the atmosphere around the sect worry many relatives who seize the authorities. Elected to the House of Representatives, Leo Ryan traveled to Jonestown in November 1978 to investigate. He will, despite himself, trigger the drama that was brewing.

Accompanied by journalists, he questions the followers and presumably understands what is happening. Some want to return to the United States with him.

Jim Jones, who pretended to be transparent, does not hear it that way, fearing that the truth discovered by Leo Ryan will sound the death knell for his field.

The next day, November 18, 1978, before Leo Ryan, who was even stabbed as he left camp, and his delegation could board the plane at Port Kaituma, Jones' men shot them dead.

There is no turning back possible: Jones, who has been preparing his followers for weeks, then launches collective suicide with the voluntary or forced ingestion of poison.

"It's still a mystery how a single man could brainwash hundreds of people like that," wonders Mr. Duke, who would like to turn the page.

"It hurt the country a lot. It put us on the map of the world (...) for the wrong reasons. So many lives lost... We should forget all that. Giving the land to farmers (. ..) otherwise it will continue," he said.

The local authorities did not wish to respond to AFP's requests, but Tiffnie Daniels, 31, elected from the opposition of Port Kaituma, believes that Jonestown should be made a place of "memory", a museum or a tourist site that is educational.

"At the moment there is nothing. Just a monument and the jungle. But if the children want to do subjects or visit, there is nothing. If there were things that could help to understand this happened, how things like that can happen, that would be helpful," she said.

"These are bad memories, okay," she concludes, "but it's also history."