Republicans well placed but no "red wave" in the American elections

The "red wave" (the color of the Republicans) announced did not take place during a tense vote on Tuesday but without violence, despite fears before the vote, undoubtedly depriving Donald Trump of a springboard in his will to regain the White House. 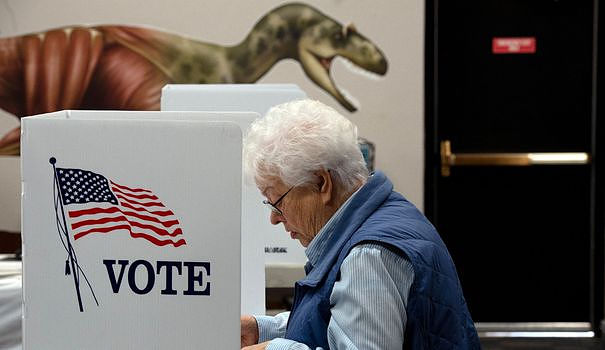 The "red wave" (the color of the Republicans) announced did not take place during a tense vote on Tuesday but without violence, despite fears before the vote, undoubtedly depriving Donald Trump of a springboard in his will to regain the White House.

The former president also observed an unusual silence. The Democratic president was to hold a press conference for him at 9:00 p.m. GMT.

"What's coming out of the midterm elections is pretty bad for Donald Trump," Jon Rogowski, a political science professor at the University of Chicago, told AFP.

"Not only did voters reject many candidates dubbed by Donald Trump, but they also rejected his ideas," he noted, citing for example a series of referendums on the right to abortion.

More than twelve hours after the closing of the last polling stations, America was still waiting to know the fate of several decisive and disputed polls such as in Arizona or Nevada.

And, cautious, the major American media were careful not to announce their projections for control of the 435 seats in the House of Representatives, the majority being at 218.

Despite this, the Republican tenor Kevin McCarthy, who should in the event of victory become the next president of the lower house, succeeding the "speaker" Nancy Pelosi, wanted to be confident.

“It is clear that we are going to take over the House of Representatives,” he assured on the night of Tuesday to Wednesday.

If they win, the Republicans have already announced the color: they will try to tear up Joe Biden's program, on climate change for example, and have promised to open investigations into his management of power.

- Uncertainty in the Senate -

In the Senate, where the Democrats held a very slim majority before the election, it will surely take several days, even several weeks, before a majority is decided and therefore the political agenda in the United States for the next two years.

Arizona and Nevada were yet to be decided as of 7:00 p.m. GMT. Long undecided, Wisconsin re-elected Republican Ron Johnson, CNN and ABC reported Wednesday.

And in Georgia, as in 2020, the ballot is so close that it will be necessary to wait for a new election on December 6 to decide between Pastor Raphael Warnock, outgoing senator, and former American football star Herschel Walker, supported by Donald Trump, according to projections.

The Democratic camp of the 79-year-old president did not hide his satisfaction at having more than saved the furniture.

“Never underestimate how underestimated Team Biden is,” tweeted mockingly, the chief of staff of the American president, Ronald Klain.

The Democrats thus snatched from the Republicans one of the most disputed seats in this ballot, in Pennsylvania, won by John Fetterman.

The campaign was relentless and centered in particular on inflation, which emerged as the main concern of Americans according to the polls taken from the polls.

The Republicans thus said they were confident in their chances of depriving Joe Biden, a president with an anemic popularity rating, of his majorities in Congress.

Organized two years after the presidential election, the mid-term elections almost systematically act as a sanction vote for the power in place.

But American voters did not see it that way and the "Grand Old Party", which until recently had been credited with a breakthrough of 10, 25, even 30 seats in the House, was forced to review its ambitions downgraded.

As for the state governors, after snatching two posts from the Republicans (in Maryland and Massachusetts), the Democratic camp had not said its last word either in Arizona, where the outcome of the race between the Trumpist Kari Lake was the favorite, and Democrat Katie Hobbs remained unknown.

The elections in this state were not rigged, despite the technical problems encountered by certain electoral machines, local authorities insisted on Wednesday, warning that the final results would not be known for several days.

In addition, according to provisional results, abortion rights defenders have recorded several victories in referendums organized after the historic Supreme Court ruling in June.

In the end, many of Donald Trump's lieutenants were beaten. And one of those potential rivals for the Republican nomination, Florida Governor Ron DeSantis, 44, stole the show.

Re-elected triumphantly, the latter assured that he was only "starting the fight".