Renewal with the 2022 Goncourt Prize

The ten jurors of the most prestigious of French literary prizes, seven men and three women, give their verdict at midday. 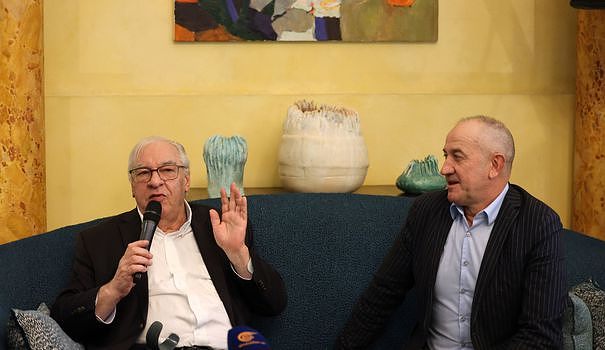 The ten jurors of the most prestigious of French literary prizes, seven men and three women, give their verdict at midday.

The ritual has been the same for more than a century: a lunch at the Drouant restaurant in Paris, to decide who has written the best French novel of the year.

The selection was narrowed down to four authors: two French women, Brigitte Giraud and Cloé Korman, an Italian-Swiss, Giuliano da Empoli, and a Haitian, Makenzy Orcel.

While in 2021 many anticipated the victory of the Senegalese Mohamed Mbougar Sarr, the forecasts are more difficult this year.

Giuliano da Empoli, 49, who published "Le Mage du Kremlin" (Gallimard editions) in April, is favored by literary journalists interviewed by the specialist magazine Livres Hebdo: eight out of twelve bet for him.

History seemed to be written before he won the Grand Prix for the novel from the French Academy: this novel, which talks about Russia over the past 30 years, and in particular President Vladimir Putin, was going to be crowned.

But achieving the double is rare. Only the American Jonathan Littell, in 2006 with his fresco on an SS officer, "Les Bienveillantes", and one of the current jurors, Patrick Rambaud, in 1997 with "La Bataille", on a Napoleonic battle, have succeeded. .

In addition, a "Decoin case law", named after the president of the Goncourt Academy Didier Decoin, wants the same book not to obtain two different autumn prizes.

Just before handing over the Goncourt 2021, he explained to AFP: "We must not forget our friends and allies who are the booksellers. If we give two prizes to a single book, it only makes one book In the showcase".

Literary prizes, which often inspire French people wishing to discover or offer a novel at the end of the year, are a crucial economic issue.

Le Goncourt guarantees sales in the hundreds of thousands. "Le Mage du Kremlin", after very favorable reviews and more than six months in bookstores, is only in the process of reaching the 100,000 copies mark. And its three rivals published in August are far from it.

Still according to literary journalists, the most serious competitor, if Mr. da Empoli were to be beaten, is Brigitte Giraud, 56.

"Live fast" (Flammarion), which looks back on the spiral of improbable events that led to the death of her husband in a motorcycle accident in 1999, greatly affected some jurors.

Cloé Korman and Makenzy Orcel, if they do not start as favourites, could make everyone agree.

The first, at 38, signs an investigation into child victims of the Shoah, "The almost sisters" (Seuil).

Three Holocaust survivors on whose testimony the story is based, however, protested. According to their testimonies to several media, the book contains inaccuracies and indiscretions about their lives.

Although they have no plans to sue, the revelation of their displeasure in the days leading up to the award is likely to weigh heavily.

Finally, for the second consecutive year, a Haitian made it to the final. After Louis-Philippe Dalembert in 2021, this time it's Makenzy Orcel, 39.

"A human sum" (Rivages) is a monologue from beyond the grave, by a young French woman, which confirms the talent of a prolific but hitherto unknown writer.

The reward comes with a check for ten euros, which the beneficiaries prefer to frame rather than deposit in the bank.

As tradition dictates, the Renaudot prize is awarded just after the Goncourt, in the same restaurant in the Opéra district of Paris.