Renaissance music and fireworks at the World Heritage anniversary

Last night's celebration of the 19th anniversary the designation of Ubeda as World Heritage Site together with Baeza was concluded by a fireworks display. 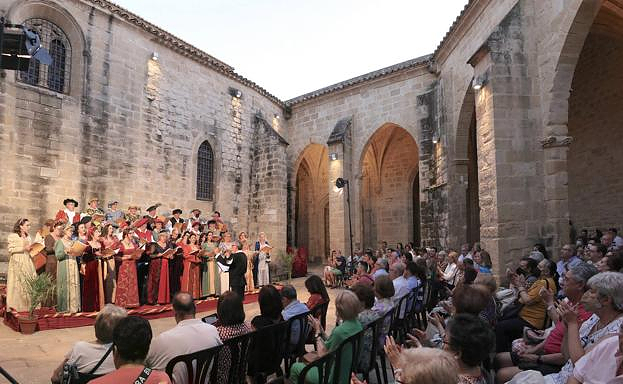 Last night's celebration of the 19th anniversary the designation of Ubeda as World Heritage Site together with Baeza was concluded by a fireworks display. It was set ablaze in the Eras Del Alcazar, and it lit up the sky above the historic center. This concluded four days of activities that were all framed in Renaissance Festival. We can now travel back to the glory of the city's past. . They also resumed normality and their usual format this year after being forced to suspend in 2020 and last year's pandemic.

Many people returned to the Alcazar neighborhood to enjoy the last day of festivities.

Yesterday's concert was held in the cultural section. It featured a complete Renaissance repertoire, which its members had prepared over several weeks. The recital was held in the Minor Basilica of Santa Maria de los Reales Alcazares, this year as the Vazquez de Molina palace was still under construction. This space brought magic to the musical program.

The Syntagma Musicum group staged a second concert the day before in the Anguis Medinilla Palace courtyard. This time, it was based on music from the 15th-16th centuries. Some of its members offered a workshop in Renaissance dancing and an exhibition during the festivities.

The Ubetense Musical Group with its young band joined the celebrations on Friday. They performed in front of Sacra Capilla del Salvador and gave shape to the Ubeda, Renaissance City’ Band Festival.

Aside from music, the market had a variety of entertainments. There was also a parade of musicians who wandered through the streets and corners of the market.

It was also remembered that Ubeda and Baeza were both included in the World Heritage List on July 3, 2003. This UNESCO recognition marked a difference in the development of the municipality in many areas, such as tourism, heritage conservation and the creation of new jobs.

Atmosphere during the Renaissance Festivals. ROMAN

‹ ›
Keywords:
MúsicaRenacentistaFuegosArtificialesAniversarioPatrimonioMundial
Your comment has been forwarded to the administrator for approval.×
Warning! Will constitute a criminal offense, illegal, threatening, offensive, insulting and swearing, derogatory, defamatory, vulgar, pornographic, indecent, personality rights, damaging or similar nature in the nature of all kinds of financial content, legal, criminal and administrative responsibility for the content of the sender member / members are belong.
Related News