The epicenter of the 5. 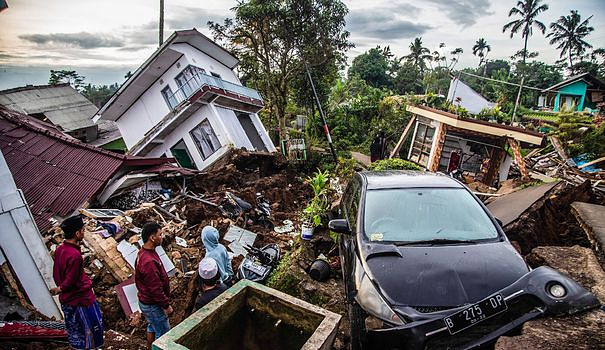 The epicenter of the 5.6 magnitude earthquake was near the town of Cianjur in West Java, Indonesia's most populous province, where most of the victims died when buildings collapsed and landslides.

Among the victims are in particular students of an Islamic boarding school or even people who died in their homes, killed in the fall of the roof or the walls of their accommodation.

"The room collapsed and my legs were buried under the rubble. Everything happened so quickly," Aprizal Mulyadi, 14, told AFP, pulled out and brought to safety by one of his friends, Zulfikar. , who later lost his life.

As body bags emerged from crumbling buildings, attention turned to the missing and those trapped under the debris in this rural, mountainous region where houses are made of both wood and concrete.

Indonesia's disaster management agency (BNPB) said at least 25 people were still under the rubble as the city plunged into darkness.

As rescue efforts continued to find them, the survivors camped outside in near complete darkness, surrounded by ruins, shards of broken glass and large slabs of concrete.

More heavy equipment such as bulldozers were deployed to Cianjur on Tuesday to support rescuers, and rescuers were trying to clear roads blocked by landslides, said Joshua Banjarnahor, spokesman for the agency. search and rescue in the city of Bandung in West Java.

According to the BNPB, more than 2,000 houses suffered damage. Some 13,000 people have been taken to evacuation centers, West Java Governor Ridwan Kamil said.

Doctors were treating patients outdoors as well as in makeshift medical units after the quake, which was felt as far away as the capital, Jakarta.

Relatives expected authorities to release bodies stored in morgues to bury their loved ones in accordance with their Islamic faith, while others continued to search for the missing amid the chaos.

Indonesia is regularly confronted with earthquakes or volcanic eruptions, due to its position on the Pacific "ring of fire" where the tectonic plates meet.