Fishing at an ice hole on a frozen lake, cross-country skiing on endless, groomed trails or being pulled by reindeer on a sled through the snow-covered spruce and pine forest: The cold season in Finnish Lapland offers many options for active holidaymakers - and they are long. 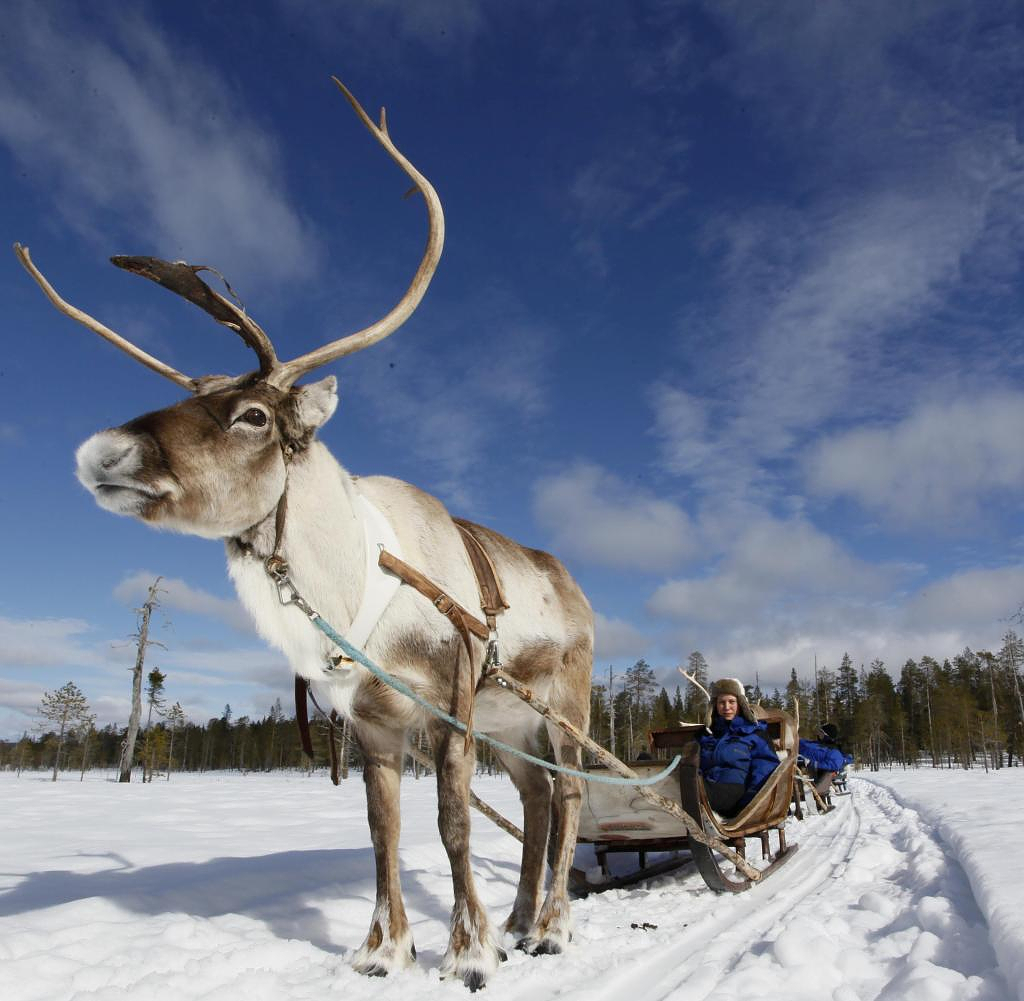 Fishing at an ice hole on a frozen lake, cross-country skiing on endless, groomed trails or being pulled by reindeer on a sled through the snow-covered spruce and pine forest: The cold season in Finnish Lapland offers many options for active holidaymakers - and they are long.

Winters last up to 200 days a year in Finland's far north, and they are bone-chillingly cold. The coldest temperature ever measured in Finland was measured in Lapland in 1999 at minus 51.5 degrees Celsius. The snow often doesn't melt until May, in some places never.

But you should also keep an eye on the time window in which it is bright enough for outdoor excursions during the day, because there is a polar night in winter. In extreme cases, this means that the sun does not even rise above the horizon at the northern border for more than 50 days.

The village of Nuorgam boasts of being the northernmost point in Finland and the whole EU. Nuorgam is part of the municipality of Utsjoki - it is the only one where the indigenous Sami people are in the majority. Only around 7,000 of them live in Finland, 4,000 of them in Finnish Lapland, which is fairly deserted: Although the region covers almost a third of Finland's total area, with a good 175,000 people only around three percent of all Finns live here. On the other hand, there are up to 200,000 more reindeer than people in northern Finland.

The landscape of the region is characterized by vast forests with small conifers and birches, which sometimes do not get over the tree line of only 300 meters. Here then lichens and mosses take over, which also cover the worn mountain ridges of Lapland; these inselbergs, which stand out from the flat surrounding area, are called Tunturi in Finland.

Even if they do not reach alpine heights, ski areas have been set up here, for example on the 719 meter high Ylläs Fjäll, in Saariselkä with ski slopes and a network of cross-country ski runs or in Levi, the largest and best-known winter sports center in Finland, almost 200 kilometers north of the Arctic Circle. The Pallas-Yllästunturi National Park is also popular, where snowshoe hikers and ski tourers get their money's worth. And when summer comes at some point, mountain bikers conquer the terrain.

No, it's not green Martians sending green flares across to Earth. The greenish glowing light phenomena that can be seen from time to time in the polar regions of the northern hemisphere are aurora borealis, also known as aurora borealis.

Northern lights sparkle across Lapland's sky: near the Finnish city of Rovaniemi, a photographer captured the fascinating images of the natural spectacle.

In Finnish Lapland, with its often starry night sky, the chance of seeing the Northern Lights is particularly high. That's why there are even hotels in the region that rent out glass igloos with double beds, from which guests can observe the celestial phenomenon undisturbed and without cold feet or a frozen nose.

Aurorae occur when electrons from the solar wind collide with molecules in the atmosphere in the upper layers of the earth's atmosphere at an altitude of about 150 kilometers. This results in an exchange of energy. The molecules are electrically and energetically charged and therefore glow. And why especially in the polar regions? Because the charged particles are directed towards the north or south pole by the earth's magnetic field.

Brown bears, arctic foxes, lynxes, wolves – there are quite a few predators in Lapland. Among the lesser known is the wolverine, which was on the brink of extinction in the mid-20th century when there were only around 1000 animals left in the Nordic countries. It was mainly hunted by reindeer herders, whose herds were often attacked by the bear marten. His warming fur was also popular.

Its name comes from the fact that the animal with the bear-like face and the stinky glands on its bottom to mark its territory is considered to be insatiable. He is also called greedy gorge. When the winter thaws, it eats whatever carrion it finds. The aggressive wolverine even disputes the prey of brown bears. Its populations have recovered thanks to protective measures.

In Lapland, the ingenuity in sauna construction is particularly pronounced. For example, there is the smoke sauna in Kiilopää by a mountain stream, which is zero to one degree cold in winter – you cool off in its water. Or the snow sauna at the Arctic Snow Hotel north of Rovaniemi, which is made of ice and snow. When you enter the sauna, it is freezing; thanks to many infusions, it reaches 100 degrees.

You can sweat it out on runners in the carriage sauna offered by the “Apukka Resort” in Rovaniemi. Take a sauna on board the world's only sauna gondola, which is on Finland's longest cable car route on the Ylläs. The tour lasts 20 minutes until the wooden gondola with a maximum of four people willing to sweat has driven down into the valley and back to the top of the Ylläs.

In Lapland, the cloudberry stands for the eagerly awaited summer. The peach-colored fruits that ripen close to the ground in swamps and moors are a delicacy: bitter-sour to honey-sweet, difficult to pick and therefore precious. Attempts to cultivate the plant were unsuccessful. Most of the cloudberries harvested in Finland are collected in Lapland.

At the midnight sun cloudberry market in Ranua (the self-proclaimed cloudberry capital), prices per kilo exceed 30 euros, which is why the locals call the precious fruit the gold of Lapland. It adorns the reverse of the Finnish two euro coin.

Santa Claus lives in the Arctic Circle, eight kilometers outside of Rovaniemi. Every child, not only in Lapland, believes that. This is where the Man in Red runs his main post office, which is part of the official Finnish postal service network. Santa Claus receives half a million letters there every year, mostly from children who want to write their wishes to Santa Claus. Its correct address is: Santa Claus Village, Tähtikuja 1, 96930 Rovaniemi.

If you are on holiday in Finnish Lapland, you can also have your Christmas mail processed by the special post office. You put them – correctly stamped – in the red mailbox. It doesn't matter when the mail is posted there, in spring, summer, autumn or winter: All letters are only sent shortly before Christmas and are given a special Arctic Circle stamp by Santa or his post elves.

"I leave to arrive, to be closer"

This is what Nils-Aslak Valkeapää wrote in his book “Trekways of the Wind”. Born in 1943 in remote north-west Finnish Lapland to a reindeer herding family, the writer, singer, artist and actor is the only Sami to receive the Nordic Council's Literature Prize. His natural poetry is considered an expression of the way of thinking of indigenous peoples. He performed the Sami joik, a yodel-like song, at the opening of the 1994 Winter Olympics in Lillehammer, Norway. Valkeapää died in 2001.

‹ ›
Keywords:
KruegerSoenkeFinnlandLänderporträtsWeihnachtenPolarlichtNordlichtLänderkunde (Kolumne)LapplandRegionenporträtsRovaniemiSanta ClausYlläOlympische WinterspieleNordhalbkugelFinnisch LapplandLillehammerArctic Snow HotelReiseVielfraß
Your comment has been forwarded to the administrator for approval.×
Warning! Will constitute a criminal offense, illegal, threatening, offensive, insulting and swearing, derogatory, defamatory, vulgar, pornographic, indecent, personality rights, damaging or similar nature in the nature of all kinds of financial content, legal, criminal and administrative responsibility for the content of the sender member / members are belong.
Related News